Will Trump Stick to His State of the Union Promises? 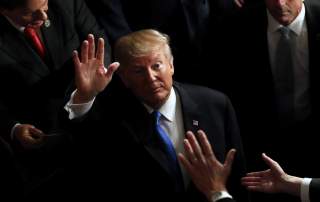 One of the frustrating things about President Donald Trump is that he can rise to the occasion—but only on occasion.

Trump did well in his first State of the Union address. That shouldn’t be a surprise. His speech last year to the joint session of Congress, a similar exercise, was also successful.

“With the exception of the late, great Abraham Lincoln, I can be more presidential than any president that’s ever held this office,” Trump vowed on the campaign trail. He hasn’t lived up to that promise in any sustained way, but you can string together some examples of him at least reaching the Millard Fillmore level in a few big moments.

This kind of analysis enrages Trump’s many critics, who think the bar is set unacceptably low for the current president. But major political figures are always to some extent graded against expectations. And Trump did not merely read competently from a teleprompter. His use of State of the Union guests was deft and he effectively hit emotional notes in a more formal setting than his freewheeling rallies.

Where Trump’s detractors are right is that we should not expect this to become the norm. No grand pivot to a new Trump will occur. Within seventy-two hours, he will say, do or tweet something that will overshadow Tuesday night’s speech. In fact, his hot mic moment about releasing House Intelligence Committee Republicans’ FISA memo threatened to do so before he even left the building.

Much of the media reaction to Trump’s speech was a stunned amazement that he mostly talked about the agenda he promised to enact while running for president and was not sufficiently solicitous about Democratic sensibilities. These talking heads showed no similar concern about whether Rep. Joe Kennedy’s (D-MA) response contained any olive branches to Republicans. They portrayed opposition to President Barack Obama as merely churlish.

Democrats seethed about what they saw as racist dog whistles and alarm bells throughout Trump’s speech. “I was hoping to get through my life without having to witness an outwardly, explicitly racist American president, but my luck ran out,” said retiring Rep. Luis Gutierrez (D-IL) after the speech was over.

But Trump took pains to frame his nationalism as a commitment to “protect our citizens of every background, color, religion, and creed.” He touted record lows in black and Hispanic unemployment. The family members of victims of MS-13 he showcased were themselves people of color, grounding his concern about the issue not in terms of white versus brown but public safety versus lawlessness.

Trump has given minority communities plenty of reasons to doubt his credibility on this front, of course. From Mexican “rapists” to the botched Charlottesville reaction, from the criticism of Judge Gonzalo Curiel to “s---hole countries,” there are too many bells to unring at this point.

This is all to the detriment of Trump’s immigration pitch. He overstated the case against “chain migration” last night, but there nevertheless is a powerful one to make about Americans choosing their immigrants rather than the other way around. Current immigration skews too heavily in favor of family reunification and away from skills, contributing to much of what makes this a hot-button issue.

Congress is probably not ready to reduce immigration by as much as Trump’s framework proposes—even without the president’s tin ear (or worse) on race. But it is a debate worth having. And for all Trump’s faults, the Democrats have quietly embraced a position on immigration that is at least as extreme, increasingly rejecting any limits or meaningful enforcement.

No nationally successful Democratic politician in living memory would have publicly characterized positive references to church, family, the police or the military as a throwback to “1950s-era nationalism.” And Trump’s position on the the NFL and the national anthem, while stated in an unnecessarily crude and inflammatory fashion, is far more popular than many liberals imagine.

Trump’s State of the Union leaves one with a sense of what might have been. What if he had made that speech with a longer track record of speaking soberly, had avoided carelessly wading into racially tinged controversies and had used Twitter more strategically?

If this were the case, it would be a lot easier to see Trump’s speech as a turning point rather than a “more presidential than any president” outlier.