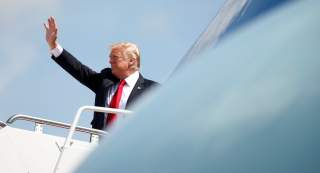 Each day since President Donald Trump took office comes another apparent similarity between him and the ill-starred administration of President Richard Nixon. For a Nixon scholar, it is an embarrassment of riches and a daily sign of Nixon's continued relevance.

So much of the Trump administration's problems and the dimensions of the various investigations into the activities of him and his campaign operatives have parallels in the Nixon administration. A student of what happened to Nixon can see the chalk outline of Trump’s career on the ground before the body has fallen.

The similarities are striking. They include:

Both men are struggling to cope with the problems from their campaigns. Nixon interfered with the 1968 Paris Peace Talks and spent the rest of his life covering it up. His 1972 campaign featured the break-in at the Democratic National Committee headquarters in the general Watergate complex. Nixon didn't know about the break-in in advance but covered it up anyway. Trump is coping with the continued revelations of Russian help for his 2016 campaign, which could sink his presidency.

Nixon and Trump inspired loathing by their political opponents. Democrats had hated Nixon since his first race for Congress in 1946, and that hatred grew after his prosecution of Alger Hiss, his innuendo-laden 1950 Senate race and his eager embrace of the role of Dwight D. Eisenhower's hatchet man as vice president. Democrats now loathe Trump for his campaign against Hillary Clinton and virtually everything he has said or done since then.

Finally, they have both gone to war with the intelligence community. Nixon hated the CIA, which he thought cost him the 1960 election against John F. Kennedy, and agency leaders returned the favor. Trump thinks the intelligence community is leaking secrets to undermine his young presidency. Intelligence officials knew how Nixon had tried to skew intelligence to fit his proposals. They suspect Trump's ties to Russia; some of the damaging leaks about Trump have their roots in the nation's intelligence agencies.

For all their similarities, however, the two presidents have clear differences.

Nixon made most of his inflammatory comments in private, while Trump wears his sympathies with white nationalists on his sleeve.

Nixon kept the military at bay, which contributed to his problems, while Trump has put military men in the top jobs in his administration—chief of staff, national security adviser and secretary of defense.

Nixon operated in secret; Trump does virtually everything in public, from his admiration of harsh police tactics to what his opponents call his thinly veiled racism.

Nixon was paranoid; Trump is not. Nixon operated as if everyone wanted to get him. Trump acts as if he does not care.

Most important, however, is that Nixon got results. He opened relations with China, reached a strategic arms deal with the Soviet Union and helped end the Vietnam War. Trump has accomplished very little aside from picking a Supreme Court Justice who was confirmed. His agenda beyond that is stymied.

Foes of both presidents viscerally wanted them to leave office early. Nixon did, forced to resign before the revelations of his apparent crimes led to his impeachment. Trump's support drops each day, but a Republican Congress still lacks the appetite to cast out one of its own.

Trump's foes are everywhere and obvious, from the Democrats to the never-Trump Republicans to the international community, primarily German Chancellor Angela Merkel and the British Parliament that doesn't want Trump to visit London, that is shocked at having to deal with him. Nixon's obvious foes were the Democrats, but his most serious rivals came from within, starting with his chief of staff—General Alexander Haig. Unknown to the public, the military had doubts about Nixon from the beginning, and the unwitting Nixon thought Haig was immune to those doubts.

He was not. As much as anything, Haig used Watergate to push Nixon from office. Haig was behind the firing of Watergate special prosecutor Archibald Cox and the resignations of Attorney General Elliot Richardson and his deputy, William Ruckelshaus. This calamitous event, called the Saturday Night Massacre, sparked multiple impeachment filings. Haig also engineered the leaks about Vice President Spiro Agnew's legal problems and pushed Agnew to resign, which made it easier to get rid of Nixon. These details were captured in Colodny's Silent Coup and expanded upon in greater dimensions in Locker's Haig's Coup scheduled to be published next year.

So how long will Trump last?

Nixon resigned far later than his rivals hoped; he contemplated quitting in May 1973 but didn't go until August 1974, when he realized his Republican support diminished each day. If Trump goes the same way, the two will be forever linked in history, much to the dismay of each.

Ray Locker is the Washington enterprise editor of USA TODAY and the author of Nixon’s Gamble. Len Colodny is the author of the best selling Silent Coup and The Forty Years War.