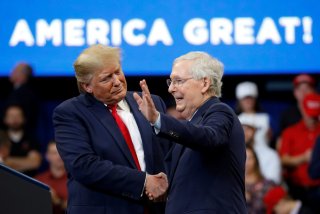 Donald Trump has the rare distinction of toppling three political superpowers. In 2016, he directly defeated the Clinton and the Bush dynasties, and just weeks ago, he gave a big assist in crushing the Cheney dynasty.

After this November’s midterm elections, Trump’s next target is likely to be ousting Sen. Mitch McConnell (R-KY) from his Republican leadership post in 2023.

Trump may not be so successful this time, as McConnell has shown a capacity to survive despite taking significant arrows from the Right and Left since the late 1990s as his climb through leadership commenced. Over time, he has built up significant IOUs from fellow Republicans.

Before voting starts, Trump and McConnell are already pointing fingers at one another, as the GOP seems poised to snatch defeat from the jaws of victory in a 50-50 Senate that should be winnable.

McConnell warned that “candidate quality” could prevent Republican victories, a not-so-subtle reference to Trump-endorsed candidates not faring so well in polling for winnable states such as Arizona and Pennsylvania. Trump (who doesn’t do subtle or even not-so-subtle) blasted McConnell as a “broken down hack” who isn’t doing enough to help Republicans win.

That’s not so different from how the two blamed the other for the loss of two 2021 Georgia Senate runoffs, which gave Democrats control of the Senate.

At that time, Trump backers descended on the state and insisted the 2020 election was a sham. This caused too many Republicans to stay home for the runoff—at least that’s how establishment Republicans frame it. On the other hand, the pro-Trump forces argue that McConnell lost Georgia by not trying to buy voters off with $2,000 stimulus checks that were Trump’s idea.

If Republicans manage to win a majority—still a possibility—McConnell is safer, though not completely secure. Trump will almost certainly demand a new majority leader, as likely will many conservative commentators.

Trump is reportedly pushing Sen. Rick Scott of Florida for the top job. That will likely be a tougher sell if the Republicans are still a minority since Scott was head of the National Republican Senatorial Committee and will face some blame for losses. If the GOP wins a majority, however, Scott might have momentum.

In Kentucky, McConnell fended off Tea Party Republican primary challenges from a future governor and repeatedly from Hollywood-backed, Silicon Valley-funded Democratic opponents in general elections. Occasionally, polls showed a competitive race before he wiped the floor with opponents on Election Day.

McConnell’s survival instincts are powerful, but he has not faced a full-fledged Trump onslaught—which has so far managed to vanquish every major GOP opponent except for Georgia gov. Brian Kemp.

There is a significant difference between Kemp, a clearly conservative governor, and McConnell, the consummate Washington insider and career dealmaker. Where they are alike is that neither took up the “stop the steal” banner after the 2020 election, which to Trump is an unforgivable sin.

Another thing Kemp and McConnell have in common is that neither are Rep. Liz Cheney (R-WY), who made an entire term in office about being an anti-Trump Republican. While Trump lambasted both, neither the Georgia governor nor the Kentucky senator fully engaged with the forty-fifth president. They simply stated their narrow differences and went on about their jobs. This could be the right balance. Though McConnell has certainly been more openly anti-Trump than Kemp, he didn’t make it the focal point of his existence like Cheney.

As for the political IOUs that McConnell has amassed, Trump is most indebted to him.

As majority leader, McConnell blocked President Barack Obama’s 2016 nomination of Merrick Garland to the Supreme Court, replacing the iconic Antonin Scalia. Now, before we get carried away with praise here, this was part of McConnell’s survival instincts. Any Republican majority leader that allowed the balance of the Supreme Court to shift under their nose would have been ousted by their caucus.

But bottom line, McConnell made the right call. The open seat on the Supreme Court made 2016 a presidential race about the next four decades rather than the next four years, motivating the conservatives that felt a little icky about Trump to turn out. It’s at least highly questionable Trump would have won the 2016 election without the open Scalia seat.

Trump had one of the most successful one-term presidencies in modern history largely due to McConnell. Trump’s lasting legacy is on the judiciary—and not just the Supreme Court.

Trump and McConnell are the two elected Republican leaders who are most responsible for the overturning of Roe v. Wade.

Still, politics is (not just a Trump thing in this case) all too often a what-have-you-done-for-me-lately game.

McConnell, should he choose to take the challenge, will have a fight on his hands to remain party leadership. Perhaps he will, as House speaker Nancy Pelosi did in early 2019, cut a deal with rebels to serve for only another two or four years.

But that won’t satisfy Trump, who wants him gone.

Trump has won the vast majority of internal GOP primary fights, but a fight to replace leadership will be fought on a different battleground. Trump knows how to be out front trying to bend public opinion. But McConnell knows how to work the system behind the scenes.

Trump became president after a career as a larger-than-life showman. McConnell rose to leadership, despite a void of charisma, through his mastery of Senate rules and backroom politicking. He has won more battles than he has lost.

The most interesting matchup might come after the elections are over, as every Senate Republican will face a time for choosing.

Fred Lucas is chief news correspondent and manager of the Investigative Reporting Project for The Daily Signal.