Will Trump Versus Biden End in Chaos? 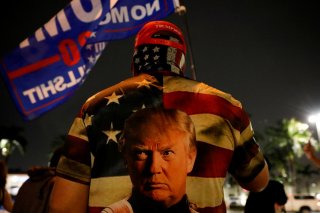 As Donald Trump launches a legal battle to stop Joe Biden from claiming the presidency, America is at a crossroads. Seldom has the country been more divided culturally and politically. The Republican party scored well in congressional and Senate races even as Biden amassed a large lead in the popular vote. In the coming weeks, there are bound to be fresh debates about the future of the GOP and Trump’s role in it as well as about the course of the Democratic party.

What lies ahead for the United States as it emerges from one of the most momentous elections in its history? Has the discord surrounding the country’s parallel trends toward anti-elite populism and identity politics peaked? What might a new administration do to help heal a polity divided by such seemingly incompatible visions for the country’s future? What might a post-Trump GOP look like? Do four years of gridlock loom large in Washington?

Daniel McCarthy is director of the Robert Novak Journalism Fellowship Program at The Fund for American Studies and editor of Modern Age: A Conservative Review.

Grover Norquist is the founder and president of Americans for Tax Reform and a member of the board of directors of the Center for the National Interest.

Paul Starobin is an author and journalist whose articles have appeared in The Atlantic, New York Times, Wall St. Journal, National Interest, and other publications. His most recent book is A Most Wicked Conspiracy: The Last Great Swindle of the Gilded Age.

Dov Zakheim is a former U.S. Under Secretary of Defense and Vice Chairman of the board of directors of the Center for the National Interest.