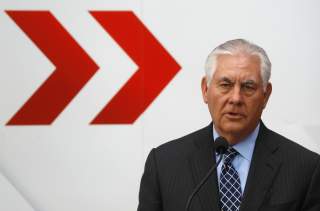 Supporters of the Iran nuclear agreement—formally known as the Joint Comprehensive Plan of Action (JCPOA)—can breathe a little easier. President Donald Trump, in announcing last Friday that he will waive oil, energy, and financial sanctions on Tehran for another 120 days, has given the agreement a brief reprieve up until the next sanctions waiver deadline in May.

That is the good news. The bad news—and the more important news—is that Trump will not throw any more lifelines without significant changes to the JCPOA. The president made this abundantly clear in the statement he issued alongside his decision, writing that “the United States will not again waive sanctions in order to stay in the Iran nuclear deal” if Washington’s European allies don’t cooperate on tougher terms. “And if at any time I judge that such an agreement is not within reach, I will withdraw from the deal immediately.”

Can the Trump administration pull off this Houdini act? If the White House is successful, it deserves props; to pressure the Europeans, the Russians, and the Chinese in just 120 days to modify a nonproliferation agreement that took over two years of nail-biting negotiations among seven separate parties would be an enormous accomplishment, one that would even force Trump’s political adversaries to tip their hats.

It’s not like the Trump administration doesn’t have a point that the JCPOA could use a fresh review. The Iran nuclear deal is anything but ideal—the very people who were sitting across from the Iranians at the table would acknowledge that the restrictions on Iran’s nuclear program were far too limited in duration than they should have been. Indeed, Secretary of State John Kerry admitted as much when he was selling the agreement to a Congress extremely skeptical of the final product.

However, what President Trump is demanding now—a supplemental agreement that would terminate the sunset clauses; compel Tehran to admit IAEA (International Atomic Energy Agency) inspectors into all of its facilities immediately; and automatically reimpose nuclear-related sanctions if Iran were to test any more ballistic missiles—are conditions Washington’s negotiating partners are highly unlikely to swallow. A day before Trump’s statement, EU High Commissioner Frederica Mogherini, French Foreign Minister Jean-Yves Le Drian, German Foreign Minister Sigmar Gabriel, and British Foreign Minister Boris Johnson were all adamant that the JCPOA, warts and all, is not subject to a renegotiation. Johnson was particularly strong in his remarks, commenting that nobody else has offered a better alternative than the current arrangement. It is “incumbent on those who oppose the JCPOA to come up with that better solution,” Johnson said, “because we have not seen it so far.”

This is exactly what President Trump is attempting to do. The unfortunate reality of the situation, however, is that nobody seems interested in going along with him—which means that by May 2018, Washington will either have to back down from a public pledge and look impotent in the process, or it will have to reimpose all of the economic sanctions on Tehran—thereby virtually guaranteeing an Iranian response. Unless there is a change of heart in European capitals, Moscow, and Beijing, the entire multilateral agreement could very well collapse this spring.

There is no question the JCPOA needs work. To take one example, Iranian engineers will be able to quickly ramp up research on more advanced and efficient centrifuges in just six years. The Iranians will be free to unseal thousands of older centrifuge machines and reinstall them by 2025. The mullahs are patient, opportunistic, and exploitive, and when the calendar hits 2030, all of those qualities will have paid off as the cap on Iran’s enrichment production is lifted.

Fortunately, there is still a small window of time for the United States to prevent the worst-case scenario from happening. But this will require the Trump administration and many lawmakers and pundits in Washington to stop obsessing about the ideal and start concentrating on what is realistic. If any supplemental JCPOA has a chance of working, the United States will have to drop its insistence that the new terms apply immediately—something the Iranians would never subscribe to and the Europeans would condemn as a violation of a good-enough deal. All parties, though, may be open to accepting a process which looks towards a post-2025 and post-2030 future.

What a JCPOA II would consist of will require a lengthy discussion between Washington, Europe, Russia and China. Assuming Tehran would be interested in such a deal, its negotiators would play hardball and ask for the moon. None of this will be easy, and indeed the differences in what each side is willing to countenance may be so wide that arriving at a workable consensus is not in the cards.

But if preventing Iran from acquiring the material needed to build a nuclear weapon is a critical U.S. national security priority, the Trump administration cannot sit on its hands and hope its negotiating partners come around to its position. The Trump administration can’t base a policy on hope. Instead, the White House needs to get real and focus on approaches which have at least a marginal chance of working.

Daniel R. DePetris is a world affairs columnist for Reuters, a frequent contributor to the American Conservative and the National Interest, and a foreign policy analyst based in New York, NY