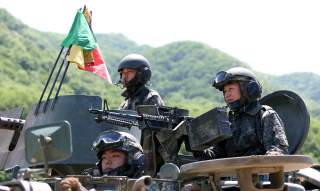 After the election of South Korean president Moon Jae-in, many experts worried that his desire to engage North Korea would be incompatible with the Trump administration’s preferred approach of increasing pressure on the regime in Pyongyang. While the United States and South Korea have been able to move beyond their differences over North Korea, trade has been another matter. In early September, the White House came close to withdrawing from the U.S.-Korea (KORUS) Free Trade Agreement (FTA), a decision that would have strained the alliance at a time when both sides should be working as closely as possible to address the growing threat from North Korea.

The Trump administration ultimately refrained from withdrawing from the agreement in the aftermath of North Korea’s sixth nuclear test. The United States and South Korea have since agreed to begin talks to renegotiate the FTA. However, the talks are likely to be difficult and contentious, and just like the renegotiation of NAFTA, President Trump has again declined to take the termination threat off the table. Thus, the possibility of the United States withdrawing from the KORUS FTA remains. This threat that does little to benefit the United States and should be explicitly withdrawn in the interest of the alliance.

North Korea’s most recent nuclear test was a significant technological step forward and Pyongyang has made important strides in developing multiple delivery systems. At the same time, the growing war of words between Kim Jong-un and President Trump has raised tensions on the Korean Peninsula. Dealing with North Korea will require strong U.S. leadership, but keeping the door open to withdrawal would continue to raise questions about the commitment of the United States to the alliance at a time when the rhetoric coming out of the White House seems to ignore the concerns in Seoul of a conflict with North Korea.

If all options for dealing with North Korea really are on the table, then the United States should not just react to North Korean provocations, but it should also be developing strategies to deal with the threats presented by Pyongyang in the medium- and long-term future. These strategies should be based on the possibility that the United States may have to live with North Korea in “de facto” possession of a nuclear-tipped intercontinental-ballistic missile (ICBM) for a period of time. These strategies could require the deployment of additional U.S. forces to South Korea and Japan, an increase in the number of Terminal High Altitude Area Defense (THAAD) batteries in South Korea, or potentially more controversial steps—such as missile-defense cooperation between the United States, South Korea and Japan.

Withdrawing from the KORUS FTA would only make it more politically difficult to implement those steps. Some strategies, such as the deployment of THAAD and missile defense cooperation, are already politically difficult for Seoul. The United States withdrawal from KORUS would also send a signal to China and North Korea that there is division within the alliance at a critical moment, compounding the error in leaving the Trans Pacific Partnership as a symbol of the United States ceding leadership in Asia.

While withdrawing from the KORUS FTA might please President Trump’s supporters, President Moon has political supporters to worry about too. The Trump administration has not been popular in South Korea and a future suggestion of withdrawal, especially now that South Korea has agreed to renegotiations, would raise questions about the United States’ reliability as partner and further complicate matters by turning the renegotiations a political issue.

Since President Trump’s comments about meeting North Korean threats with “fire and fury,” President Moon has sought assurances that the United States will not attack North Korea without consulting Seoul. Additionally, President Moon has worked to reassure the South Korean public that a war is not in offing. When thinking about withdrawal, the United States needs to be cognizant of the political dynamics in South Korea. Adding a blatant expression of American economic self-interest to existing concerns over the safety of South Korea could embolden those voices in the Moon administration that support greater engagement rather than pressure in dealing with North Korea, which could potentially narrow the political space for President Moon to maneuver on security issues.

The move would also be seen as similar to what South Koreans have come to expect from Beijing, but not their allies in Washington. For much of the past year, South Korea has faced economic pressure from China over its decision to deploy the THAAD missile-defense system. Now having deployed THAAD at a real economic cost, its ally would in essence be using a similar tactic to try and get a better economic deal.

Withdrawing from the FTA would also be of little benefit because it is unclear that the agreement has been bad for the United States. While the U.S. bilateral merchandise trade deficit has grown from $13.2 billion in 2011 to $27.7 billion in 2016, looking only at the bilateral merchandise trade deficit is unreflective of the complete reality. While U.S. merchandise exports to South Korea were down 3 percent since KORUS came into effect, South Korean merchandise imports overall are down 22 percent. At the same time, the United States surplus in services exports has grown to $10.7 billion, a 46 percent increase, and Korean investment in the United States has doubled.

One of the key areas that the administration highlights on the failures of the KORUS FTA is the $24 billion U.S. trade deficit in automobiles. However, the U.S. deficit in autos grew not because of the KORUS FTA, which only reduced U.S. tariffs on Korean autos last year, but as the U.S. auto market recovered from a nadir of nearly 11.5 million units of sales during the Great Recession in 2009 to nearly 18 million units in 2016.

In fact, the U.S. merchandise trade deficit has fallen by 28 percent so far this year and could drop to $20 billion or less. Since President Trump was elected, the United States has exported record levels of products to Korea during the months of December, March, April and May. In recently released trade data, the combined U.S. goods and services trade deficit with South Korea has fallen 50 percent in the first half of this year compared to 2016, and is down 71 percent in the second quarter.

Beef isn’t the only U.S. industry that would lose competitiveness. In addition to Australia, South Korea has FTAs with the EU, China and various other countries, all of whom would have preferential access while U.S. goods faced higher tariffs. The result would be a larger U.S. trade deficit with South Korea, not a smaller one.

This doesn’t mean that the KORUS FTA can’t be improved. The agreement as originally negotiated is now over a decade old. Companies such as Facebook and YouTube barely existed at the time. Adding a chapter on the digital economy would benefit both countries and help to signal higher standards in one of the areas that China is sanctioning South Korea over THAAD. If not resolving the dispute with China, then at least the United States will stand morally with its ally. Both countries could also work together to improve the access of U.S. autos in the South Korean market to help relieve tensions in the economic relationship.

In the end, there is no real upside to withdrawing from the KORUS FTA. Withdrawing would weaken U.S. influence in the region, undermine U.S. security interests, and do little to address America’s economic concerns. There is no reason to keep this option on the table and it would benefit both sides to formally remove this threat. In the end, the best course is to work together as allies to strengthen the economic relationship between the United States and South Korea.