Will Washington Create the Next Korea Crisis? 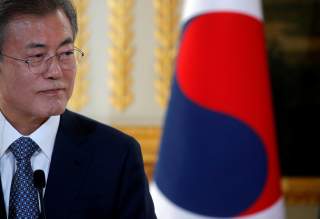 For seventy years, the U.S. presence on the Korean Peninsula has been maintained under very permissive geopolitical conditions. Though welcome, ongoing Korean Peninsula diplomacy is changing the strategic landscape in Northeast Asia, which will in turn complicate the U.S.-South Korea alliance going forward. Consequently U.S. policymakers may soon be forced to justify the U.S. military presence in Korea in a way that they have not for several decades.

At the end of World War II, inchoate global rivalry with the Soviet Union led to competition over influence in the Western Pacific, which necessitated U.S. control over the southern half of newly divided Korea. Following this, the Korean War (1950–1953) not only involved a U.S.-led United Nations Command (UNC) defending South Korea from North Korean invasion, but ended in an armistice (rather than a formal peace treaty) that made the UNC permanent and occasioned South Korea and the U.S. to sign a mutual defense treaty. As the Cold War era continued and an aggressive North Korea stoked North-South postwar hostilities, the U.S. presence via the UNC was eventually twinned by the establishment of U.S. Forces Korea (USFK) in 1957 and the U.S.–South Korea Combined Forces Command (CFC) in 1978. By law, the same U.S. four-star general commands both the USFK/CFC and the UNC, but strictly speaking these are separate posts.

When the Cold War ended, the U.S. reduced troop numbers in South Korea to below forty thousand, withdrew all nuclear weapons and surrendered peace-time operational control to Seoul. Yet North Korea’s anachronistic survival as an aggressive, totalitarian state with a nascent nuclear weapons program guaranteed continuation of the alliance at South Korea’s invitation. Moreover, the UN’s international imprimatur on U.S. peninsular presence remained intact due to the fact that the armistice was never replaced by a peace treaty. This post–Cold War status quo remains.

This context of conflict is changing, however, as current diplomacy on the Korean Peninsula aims at denuclearization of North Korea and Korean Peninsula peace and reconciliation. Regardless of the outcome, this diplomatic effort will expose and undermine a mostly unspoken fact: the U.S.-South Korea alliance may be primarily publicly justified by the North Korea threat, but an arguably more important fundamental reason for the U.S. military presence on the Korean Peninsula is the regional strategic value of forward-deployed forces in a Northeast Asia where an increasingly powerful and revisionist China promises the U.S. the prospect of intensified strategic competition.

This status quo will be destabilized if Korean Peninsula diplomacy succeeds, as denuclearization (however defined) and inter-Korean peace and reconciliation will by definition accompany a greatly reduced North Korean threat level. Meaningful numbers of leaders and publics in North Korea, China, and even South Korea and the United States will argue that Washington should drawdown and eventually withdraw militarily from the Korean Peninsula, as the threat to both the USFK/CFC and the U.S. homeland will have abated. Voices as counterposed as Victor Cha, hawkish former U.S. National Security Council member, and Moon Chung In, dovish special security advisor to South Korean president Moon Jae In, have articulated this point. Moreover, if a formal peace treaty were signed to end the armistice, the U.S.-led UNC would also face dissolution. Indeed this is a key reason why Washington has consistently rejected Pyongyang’s calls for a peace treaty as a precondition for its denuclearization.

In fact, successful Korean Peninsula diplomacy is unlikely, given Pyongyang’s extreme reluctance to surrender and dismantle its nuclear weapons program, and Washington’s unwillingness to adopt arms control as diplomatic objective (rather than full denuclearization). Yet even this more probable diplomatic failure will likely destabilize the U.S.-South Korea military alliance. That is, U.S.-North Korea denuclearization talks and inter-Korean peace and reconciliation talks are, for the moment, advancing on parallel tracks, but they are moving at different speeds and showing signs of divergence. The South Korean presidential administration of progressive Moon Jae-in has staked its fate on rapprochement with North Korea, which is already resulting in fast-moving inter-Korean measures that are fissuring the U.S.-South Korea alliance. The end of the current diplomatic process may bring failure of U.S.-North Korea denuclearization talks and successful inter-Korean reconciliation. These would be uncharted waters for the U.S.-South Korea alliance, but it is highly likely that such a situation would degrade trust between the alliance partners, with alliance rupture—including calls for U.S. peninsular troop drawdown and withdrawal—a real possibility.

The U.S. strategic community often responds to these possibilities with a two-pronged legal retort: (a) a Korean Peninsula peace process without a formal treaty to replace the armistice would not per se have any impact on the UNC, and (b) the 1953 U.S.-South Korea mutual-defense treaty grounding the U.S. military presence via USFK and the CFC refers only to provision of peace and prevention of attack “in the Pacific area.” Indeed North Korea is not specifically denoted at all in the treaty. Thus, the argument goes, a reduction in the North Korean threat would not necessarily sufficiently promote peace “in the Pacific area” such that the mutual-defense treaty would be unnecessary.

These legalistic arguments are true but misleading. Their principle weakness is that they downplay both the political and military reality of the United States’ allied combat presence in South Korea in the contemporary period. The political reality is that both American and South Korean public discourse about the alliance references North Korea as the threat to be countered, not an abstract entity “in the Pacific area.” The South Korean leadership and broader public is overwhelmingly interested in a U.S. military presence on its territory as a deterrent to North Korea, and it is to this end that Seoul annually renews its invitation to Washington to continue to forward-deploy U.S. troops on South Korean territory. The same largely holds for the United States, where for the last fifteen years the direct and indirect (weapons of mass destruction proliferation) threat North Korea has represented to U.S. territory and interests has justified the continuation of the military dimension of the U.S.-South Korea alliance.

The military reality matches the rhetoric. The USFK/CFC states its mission as “deter[ing], or defeat[ing] if necessary, outside aggression against the ROK (South Korea).” North Korea is the only potential aggressor to which the statement refers, and is indeed currently the only remotely likely regional or global military threat to South Korea. USFK/CFC force structure, positioning and posture are defensive in nature and directed at deterring and/or repelling attack by North Korea, a point Washington raises each time Pyongyang complains about the U.S. military presence in South Korea. Combined U.S.-South Korea command post exercises and field training are focused on the Korean theater. U.S. and joint U.S.-South Korea “shows-of-force” on and around the Korean Peninsula are exclusively in response to North Korean provocations. The seven bases comprising the UNC-rear area in Japan are established to support the UNC in its ongoing responsibility to monitor and maintain the armistice on the Korean Peninsula.

The political and military realities of the purpose of the U.S.-South Korea military alliance combined to come into stark focus in 2017–2018, as Washington and Seoul negotiated the Special Measures Agreement (SMA) on alliance burden-sharing, as well as the USFK’s deployment of a Terminal High Altitude Area Defense (THAAD) missile defense battery on South Korean territory. Concerning the former, President Donald Trump and his political supporters argued in the lead-up to the SMA negotiations that South Korea should pay more for the U.S. military on the Korean Peninsula because the United States is there to defend South Korea from North Korean aggression. Unsurprisingly, little was said about how the U.S. presence on the Korean Peninsula brings it wider regional benefits, notably a strategic military position near China.

As for the latter, THAAD was controversial in several ways. South Korea was pressured by the United States to accept the ballistic missile defense system, which Seoul feared would irritate China, South Korea’s number one trade partner. Indeed this is precisely what occurred, as China punished Seoul for allowing THAAD deployment with an array of targeted measures that cost South Korea approximately $10 billion in 2017 alone. Although THAAD interceptors are no threat to Chinese ICBMs, Beijing argued that THAAD’s X-band radar could be linked to the wider U.S. ballistic missile defense system and thus degrade China’s strategic nuclear deterrent. The United States responded that THAAD’s radar was configured in terminal mode and thus only capable of scanning for North Korean missile launches.

Up until now Washington has had it both ways. When convenient for the U.S.-South Korea alliance to be directed against North Korea (for instance to minimize antagonism of China), Washington has referred to the Pyongyang menace. When confronted with the possibility of reducing or withdrawing troops consequent to Korean Peninsula peace and reconciliation, the United States has referred to the more expansive terms of the mutual-defense treaty. It has been possible for Washington to maintain this strategically ambiguous discourse about the purpose of its military presence on the Korean Peninsula because North Korea has been an actual threat and South Korea has been a willing partner. The plausibility of this approach will likely soon come under stress. If Korean Peninsula diplomacy successfully brings denuclearization and peace to Korea, then South Korea will likely hedge more aggressively against China’s antagonized reaction to the U.S. troop presence on the Korean Peninsula. If Korean Peninsula diplomacy fails, it is likely to happen in the context of U.S.-South Korea alliance rupture; in this case also the U.S. military presence in South Korea would be at risk.