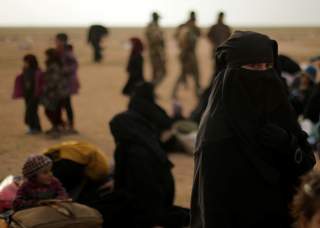 U.S. foreign policy is going through momentous changes in the Middle East, bookending one war and potentially presaging another. On February 6 the seventy-nine members of the anti-ISIS Coalition gathered in Washington as the United States planned its withdrawal from Syria amidst the looming defeat of Islamic State. On February 14 U.S. Secretary of State Mike Pompeo joined sixty countries at a summit in Warsaw in which he said it was important to confront Iran in the Middle East. With Israel’s Prime Minister Benjamin Netanyahu looking on, and several key Arab allies present, Pompeo said that Hezbollah, Hamas, the Houthis and other aspects of Iranian “malign influence” were regional threats.

The United States now faces a complex challenge in drawing down forces in Syria, but leaving behind several hundred personnel as part of an international stabilizing force. The U.S. withdrawal, initially announced on December 19 and estimated to take several months will now represent a “tactical change,” in the words of Secretary of State Mike Pompeo and “continuity” of mission as Chairman of the Joint Chiefs Joseph Dunford insisted on February 22. U.S. equipment has already begun exiting Syria and more withdrawal operations will occur after the month of February. But U.S. officials, from the president to Sen. Lindsey Graham, who expressed concerns about Iran’s presence in Syria at the Munich Security Conference, want to keep pressure on the country. Trump asserts that the United States can use Iraq to “watch” Iran, while continuing presence of U.S. forces in Syria ensure the Iranian-backed Syrian regime doesn’t benefit from U.S. withdrawal.

The State Department says there is no military solution for Syria. On the sidelines of the February 6 coalition meeting Egypt, France, Germany, Jordan, Saudi Arabia and the United Kingdom gathered with the United States to discuss Syria. Many of these countries also attended the Warsaw summit. But these historic meetings seem light on substance and concrete plans for Syria and the Middle East. Since last August, when Special Representative for Iran Brian Hook was appointed, Pompeo has stressed the need to pressure Iran. Yet the pressure doesn’t appear to materialize, instead recent statements from Iran and a naval drill near the Straits of Hormuz point to a growing sense of victory in Tehran.

Iran’s feeling that it is not facing pressure were on display when Iranian president Hassan Rouhani met his counterparts, Russian president Vladimir Putin and Turkish president Recep Tayyip Erdogan in Sochi on February 14, the same day Pompeo was in Warsaw.

The presence of U.S. forces in Iraq is controversial locally, especially among pro-Iranian politicians and the Iranian-allied Popular Mobilization Forces (PMF), the group of mostly Shi’ite militias raised in 2014 to fight the Islamic State. Those militias became part of the government’s paramilitary forces last year. There have been calls for U.S. troops to leave. Fatah Alliance spokesman and Member of Parliament Ahmed al-Assady said on February 13 that U.S. forces are providing logistical and air support in Iraq based on an agreement with the government signed in 2014. Prime Minister Adil Abdul-Mahdi met acting U.S. Defense Secretary Patrick Shanahan on February 12 and said that the government would follow parliament’s lead in whether to continue to welcome U.S. forces. President Barham Salih says Iraq must not become a center of renewed U.S.-Iran tensions.

Comments by the Trump administration in early February, that the United States would use Iraq to “watch” Iran, prompted these condemnations from Baghdad. Iraq would not be used as a battlefield between Iraq and Iran, the prime minister says. While Trump calls the facilities the United States uses “bases,” the Iraqi leadership doesn’t like the term and prefers to see the U.S. presence as temporary and primarily a training mission. Iranian media frequently cites attempts by the PMF to interdict or provoke U.S. forces.

In the Kurdistan Region of Iraq the view of the U.S. presence is more positive. Safeen Dizayee, chief of staff of the prime minister’s office of the Kurdistan Regional Government, and KRG spokesperson, says that the withdrawal of U.S. forces in 2011 had been premature and led to the crises in 2014 when the Islamic State attacked. “Iraq faced the calamities and aggressions of ISIS. It was clear then that Iraq neither politically nor militarily was prepared for such a turn of events,” he wrote in a statement. The Iraqi security forces fled ISIS in the summer of 2014, abandoning many vehicles to the extremists. U.S. airstrikes, and later the coalition formed to fight the Islamic State, had to then destroy some of that equipment in the battle to save Baghdad and Erbil in the fall of 2014. “The U.S. must try to come to some arrangements with Iraq and accommodate the needs of building up a better army and a practical mechanism between the Peshmerga forces of the KRG and the Federal army,” Dizayee said.

Along with other KRG officials, he reiterated that there is a threat of resurgence by the Islamic State.

The KRG’s Prime Minister Nechirvan Barzani made a similar assertion in late January. “We believe that as long as there is an ISIS threat in this country which there is and it is real, it is necessary that American forces stay in this country to support Iraqi forces,” he said. That the Islamic State is still a threat is clear from the strike releases of the Combined Joint Task Force Operation Inherent Resolve, the anti-ISIS campaign. Of the 199 strikes from January 27 to February 9, twenty of them were carried out in Iraq. Those strikes took aim at tactical units and supply units. America and its allies also targeted buildings and tunnels.

The challenge for the United States is now how to cross the bridge from the Syria withdrawal to maintaining a presence in Iraq and not having that presence become part of a new controversy that could potentially lead to calls by Baghdad for another U.S. withdrawal. In Washington the anti-Islamic State coalition stressed that this was a “key moment in our coordinated fight.” The US said it is determined to prevent an ISIS resurgence. “As ISIS is defeated on the battlefield, the Coalition will continue its stabilization efforts.” Those efforts were supposed to involve stabilization in Syria, but the U.S. administration has been mum on how it will continue to support a coalition mission in Syria. Other countries, such as France and the UK could remain in eastern Syria as part of this international stabilization force, but Washington has not resolved sticking points with Turkey on how the force will operate along the border. Turkish defense minister Hulusi Akar led a high-level delegation to Washington on February 22 and Trump spoke to the Turkish president the day before with intentions of smoothing the changes in Syria.

Meanwhile the Syrian Democratic Council (SDC), the civilian wing of the main U.S. partners in Syria who are fighting ISIS, sent its co-leader Ilham Ahmed to Washington for two weeks in January and February to press the United States withdraw more slowly. Although she gave several press conferences and met U.S. legislators, it does not appear the SDC came away with any promises for a U.S. no-fly zone or a phased withdrawal. The SDF is still fighting the Islamic State and says that it lost another score of fighters in battles around Baghuz, some of the ten thousand casualties it has suffered since 2015. The area around Baghuz is not stable, with twenty thousand civilians, including Islamic State members fleeing in the last weeks. Processing and taking care of these displaced people, including monitoring the foreign fighters, is a major challenge for the coalition and its partners. Even with a token U.S. force remaining, it’s not clear how stabilization can be achieved and all these former ISIS members monitored without a clear commitment.

Turkey is trying to work with both Russia, Iran and Washington in regards to Syria. At Sochi on February 14 Ankara signed on to a statement praising the U.S. withdrawal as “strengthening stability and security,” while telling Russia it wants to go forward with purchasing the S-400 and telling Washington it wants to increase bilateral trade to $75 billion. Erdogan said that Turkey does not want a new crisis in Syria.

Turkey’s role in the Syria issue presents Washington with the similar challenges it faces in Iraq, how to withdraw and not end up in another crises. Turkey sent its foreign minister to the February 6 coalition meeting in Washington and said coordination was needed in Syria, including to defeat Islamic State remnants. Ankara had said in December 2018 that there was no longer a threat of the Islamic State in Syria. It is still unclear how the US intends to manage its withdrawal without a clash developing between Turkey and the SDF, elements of which Turkey has accused of being linked to the Kurdistan Workers Party (PKK). An observation  or stabilization force involving NATO countries might be one option. This concept raised at a NATO meeting in Brussels on February 13.