William Barr: The Most Powerful Attorney General in U.S. History? 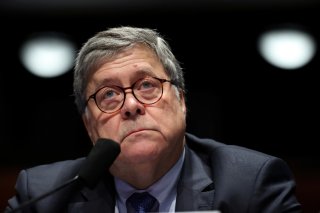 This is Attorney General Bill Barr’s moment. Barr has emerged as the most important official in the Trump administration. His only rival for the spotlight is Donald Trump. But it is Barr who is consistently defining the parameters of the debate in the run-up to the 2020 election. No one will do more to bolster—or undermine—Trump’s political fortunes than Barr.

Barr has made a number of statements in recent weeks that make it clear he is going to war against what he views as an immense Left-wing conspiracy to undermine traditional American values. Consider his declaration at Hillsdale College during a Constitution Day celebration that the coronavirus lockdown is the “greatest intrusion on civil liberties” apart from slavery. Here Barr is seeking to shift the rhetorical ground away from those who claim that slavery was the greatest evil in American history. Instead, Barr is alleging that there is a contemporary dastardly practice that rivals the historical memory of slavery itself. “You know, putting a national lockdown, stay at home orders, is like house arrest. Other than slavery, which was a different kind of restraint, this is the greatest intrusion on civil liberties in American history,” he said. He argued that the governors are not to be trusted, that they are acting as a kind of deep state to suppress the liberties of the common folk: “They treat free citizens as babies that can’t take responsibility for themselves and others.”

Nor was this all. Barr also took a swipe at the prosecutors who work for him at the Justice Department. His contempt was palpable: “Name one successful organization or institution where the lowest level employees’ decisions are deemed sacrosanct, there aren’t. There aren’t any letting the most junior members set the agenda.” He likened the practice to a “Montessori school,” where children are given free rein. Does he interfere in political cases like the Roger Stone prosecution? Barr was having none of it.

But perhaps the most provocative move that Barr made was to raise the prospect of charging Seattle mayor Jenny Durkan with sedition for allowing the establishment of a so-called free-range zone. Durkan went ballistic. She responded by declaring that this “report is chilling and the latest abuse of power from the Trump administration. This is not a story about me. It’s about how this President and his Attorney General are willing to subvert the law and use the DOJ for political purposes.” Federal prosecutor Brian T. Moran, however, who serves in the Western District of Washington, denies the report that Barr was seeking sedition charges.

Whether Barr’s moves are helping Trump politically is an open question. They may, in fact, harm his standing. Trump’s law and order campaign has not improved his position in the polls.

But one thing is clear: the stakes are getting higher as November 3 approaches. If the election is close, it can be safely anticipated that Barr, who has declared that a Biden administration would jeopardize America by promoting socialism and who has cast doubt on the safety of mail-in voting, would do everything in his power and more to ensure that Trump is able to secure a second term. In turn, the opposition to Trump has also made it abundantly plain that it intends to organize and demonstrate against Trump. The election itself on November 3 may be less important than what follows. The true electoral combat, in other words, may take place after, not before, November 3, as each side galvanizes its protesters and armies of lawyers.

But Trump has an advantage in this possible looming struggle. He has the power of the federal government and the eagerness of his attorney general to defend him and his powers and privileges wherever and whenever he can. In doing so, Barr is becoming the most powerful and influential attorney general in American history.