Winning in Afghanistan Requires Taking the Fight to Pakistan 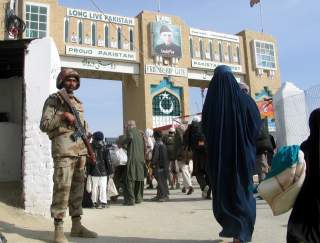 U.S. Special Envoy for Afghanistan Zalmay Khalilzad was in Washington, DC last week to brief Capitol Hill on his ongoing talks with the Taliban. The senators were unimpressed, and with reason. There any many flaws in Khalilzad’s plan: It revives the pre-9/11 formula of legitimizing Taliban rule in exchange for a Taliban pledge to close terror camps; it undercuts the legitimacy of the elected Afghan government; and it discounts the Taliban’s long history of insincere diplomacy and fleeting commitments. The biggest problem with Khalilzad’s approach, however, is it ignores a simple fact: There can be no peace in Afghanistan so long as Pakistan chooses to undercut Afghan stability and support extremism. The missing piece to the Khalilzad strategy, therefore, is how to bring Pakistan to heel.

The 1971 secession of Bangladesh (formerly East Pakistan) shook Pakistan to its core. After all, Pakistan was meant to be an Islamic state, but Bengali succession showed both how potent ethnic nationalism was, and how it posed an existential threat to the country. It was then that the Pakistani military broadly and the Inter-Services Intelligence specifically concluded that Pakistani security depended upon the spread of radical Islamism so that religion could trump ethnicity as the primary identity across the country.

This impacted Afghanistan for the simple reason that Pakistani authorities fear a strong, stable Afghanistan could become a magnet for Pakistan’s own Pashtun minority. After the Soviet invasion, Pakistan channeled aid exclusively to more religious rather than nationalist Afghan groups empowering the “Peshawar Seven” Mujahedin over a far broader array of anti-Soviet opposition. The United States had little choice but to go along since delivering aid to Afghanistan was even more dependent upon Pakistan than it is now (given that Iran was in the throes of revolution and Central Asian states were still under Soviet domination).

Pakistan supported first Gulbuddin Hekmatyar (an Islamist, ethnic Pashtun, and sociopath) long after the United States abandoned him and then Pakistan co-opted the Taliban (whom the United States never supported, despite conventional wisdom to the contrary). While the George W. Bush administration pushed Hamid Karzai to power in the hope that he could tie Afghanistan’s myriad strands together, the Pakistani government from the start supported the Taliban as a hedge against Afghan stability and security. Regardless of what Pakistani diplomats and political officials might have said, the ISI continued to support the Taliban and more radical groups operating in Afghanistan and, more broadly, against the United States.

How to Solve the Pakistan Problem

So what to do? Neither President Donald Trump nor, for that matter, the American electorate wants to stay in Afghanistan into perpetuity, at a cost of more than $30 billion per year. That, however, does not make negotiating a bad deal or a thinly veiled surrender wise. The United States is in Afghanistan for a reason—to prevent its territory from being used by Al Qaeda or like-minded groups to strike at the United States. To abandon Afghanistan to a force that cooperates fist-in-glove with Al Qaeda simply negates the sacrifice already made. Nor are Britain’s Irish Republican Army negotiations and Good Friday accords a useful analogy for the Afghanistan peace process for the simple fact that Northern Ireland never bordered a country like Pakistan.

If the Afghan peace process is to succeed, then the United States must bring the full weight of leverage to bear on Pakistan in order to win a cessation of Pakistani support for the Taliban. Despite decades of tension, and occasional sanctions mostly applied over the nuclear issue, the United States has many options in its diplomatic arsenal as yet unused in its quest to compel Pakistan to reduce support to the Taliban or to raise the cost of defiance.

First, Pakistan might be put on the Financial Action Task Force (FATF) blacklist given its extensive ties to terror groups. Simply put, there is no reason why Pakistan should receive a pass for diplomatic convenience, especially when it has shown a consistent unwillingness to act with good will.

Second, in 2004, the George W. Bush administration designated Pakistan “a Major Non-NATO Ally.” This move provided Islamabad with benefits in both defense purchasing and cooperation and was also a mark of confidence in Pakistan. Rescinding such designation would accordingly signal a lack of confidence.

Third, Pakistan continues, with U.S. support, to receive International Monetary Fund and World Bank loans to help resolve its balance-of-payments problems, most recently negotiating a $6 billion IMF loan. Given the amount Pakistan spends on militancy support, the future U.S. position should be to oppose all such loans or at least make them contingent on an end to any assistance to the Taliban. Consider that to be the Pakistan equivalent of the Taylor Force Act.

It may be unwise to target the entirety of Pakistan for what, in reality, are the actions of a handful of specific military officers and ISI veterans well known to the United States. These individuals—and terror-supporting politicians—might be individually designated, much as Iranian Qods Force head Qassem Soleimani is.

The Trump administration might also privately threaten Pakistan with a State Sponsor of Terrorism designation which, by any objective measure it deserves. Public declaration of intent or even consideration would rock Pakistani markets.

Finally, in its counterterrorism fight in Afghanistan, U.S. forces have yet to strike at Afghan Taliban bases in Pakistan. While the U.S. military has violated Pakistani territory—for example, in the mission to kill Osama bin Laden whom Pakistani authorities were hiding—it has never taken the Afghanistan fight into Pakistan. It may be time to do so, if only to signal to Pakistan the costs of providing safe haven to the Taliban and also to signal to Islamabad that Pakistan will not be immune from terror camp targeting as U.S. counterterrorism strategy in Afghanistan shifts from occupation to an over-the-horizon posture. Pakistan may be a nuclear power, but this is a move which India has used to great effect to demonstrate the consequences of Pakistani terror support.

Not everything must be coercion, however. Afghanistan’s stability depends on its ability to grow its economy, but Pakistan’s refusal to enable Afghanistan to export its produce overland to India undercuts Afghanistan’s economy and pushes Afghanistan into greater cooperation with Iran. Perhaps, then, the incentive for more positive Pakistani behavior would be an agreement to trade Afghan access to India in exchange to Pakistani access through Afghanistan to Central Asia. South Asia is one of the least economically integrated regions on earth. For the sake of peace, it is important to rectify this.

Teetering on the Brink of Failure

President Donald Trump and National Security Advisor John Bolton have prided themselves on extricating themselves from treaties and agreements which constrain and do not benefit the United States. Both criticized President Barack Obama and Secretary of State John Kerry for accepting a bad deal over no deal with Iran. It is ironic, then, that Trump and Khalilzad seem to be pushing forward with a deal that would make the Joint Comprehensive Plan of Action (JCPOA) or the New Strategic Arms Reduction Treaty (New START) look loophole-proof.

At the same time, remaining in Afghanistan in perpetuity is unwise both militarily and economically. Diplomacy plays a role, but it cannot work if it blinds policymakers to reality: Pakistan is not an ally and should not be treated as one. Had it not been for Pakistani policy, Afghanistan would likely be far more stable today. The stability of Afghanistan—and the denial of its territory to terrorist groups—requires a good-faith Pakistani agreement to cease backing extremists, and after nearly two decades, this means, coercing Pakistan rather than asking nicely. Certainly, there are risks to this approach. The United States must be concerned about pushing Pakistan into China’s camp, for example, but the reality is Pakistan’s move toward China has occurred regardless of U.S. action, not because of it. Therefore, that should be a brake on coercion now. Absent any strategy to bring Pakistan in line, it is important that Trump and Bolton call the Khalilzad process what it is: window dressing on surrender and an invitation to further terrorism against the American homeland.