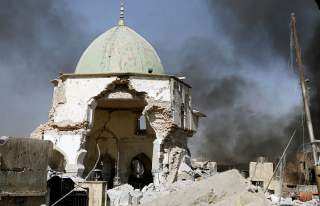 Predictably, there have been incidents of alleged abuses in the aftermath of Iraqi forces defeating ISIS in Mosul. Victorious troops were recorded throwing ISIS fighters from rooftops and shooting at unarmed ISIS fighters in targeted-killing sprees. After retaking the last strongholds of the city that had been the de facto capital of ISIS’s Iraqi territory for the past three years, Iraqis were understandably happy and caught up in excesses. “In the final weeks of the battle for west Mosul, the pervasive attitude that I have observed among armed forces has been of momentum, the desire to get the battle wrapped up as quickly as possible, and a collapse of adherences to the laws of war,” Belkis Wille, Iraqi researcher for Human Rights Watch, was quoted telling the BBC.

The veracity of footage of alleged extrajudicial executions is unconfirmed. Both Iraq and the U.S.-led coalition have promised to examine the footage and take actions. Human Rights Watch also complained that Iraqi forces are moving women and children with ties to ISIS to camps for rehabilitation.

Recently, a female Arab journalist managed to speak to families of ISIS members, including those who fled to Syria from as far as China and Indonesia. The replies were startling. First of all, not a single family member showed any sign of remorse. Some male family members didn’t even look the journalist in the eye. One relative said that ISIS tricked them into joining. Another espoused the conspiracy theory that it was all a grand Western plan to gather Muslims from around the world in the Middle East where they could be exterminated—by other Muslims.

This all relates to the larger question of defining a successful American counterinsurgency strategy. There are currently two strains of thoughts in Western foreign policy with regard to Islamist insurgency. The first one is the standard status-quo policy, a combination of bombing and gunning down active terrorists while trying to prevent radicalism by “winning hearts and minds.” This policy has failed terribly. It’s Whac-a-Mole on a global scale, and it is far from sufficient to address the underlying problem.

The second idea is to brutally clamp down on the causes of radicalism, as the Chinese have done in Xinjiang. China has clamped down hard on attempts to enforce hard-line Islamic norms. Referring to local officials as “heretics” is banned, as is pressuring people not to smoke or consume alcohol. Sometimes China’s efforts are themselves coercive; Muslim shopkeepers are forced to sell alcohol in some places.

A recent bill introduced in the U.S. House of Representatives aims to keep track of extremist leaders and preachers in mosques within the country. It is, of course, being heavily criticized by liberals, and it will predictably face legal challenges from the likes of the ACLU. But the idea being considered by Congress is a new one.

Such a strategy would face challenges in the details. One: What to do about terrorists and their family members in the West, as well as in the Middle East? It is logically impossible that most of these family members didn’t know, didn’t see any ISIS brutalities and weren’t committed to ISIS’s ideology. But what to do then? For a coalition at least officially committed to rule of international law and laws of war, that is a dilemma.

The only two times when a counterinsurgency operation was completely successful were in Grozny in Chechnya, and in Jaffna in Sri Lanka. Studying those models renders operational frameworks that differ utterly from the current Western models. Both times, government forces hit hard, with no intent to compromise, while destroying a great deal of infrastructure and putting humanitarian concerns on the back burner. But both times, government forces ultimately won peace, which is preferable to a never-ending war.

It is important to remember that the liberation of Mosul is not something to be proud of just yet. Economically, it is a damaged city—in worse condition than Stalingrad or Dresden. Materially, it is a commodity that nobody wishes to touch. Strategically, it is important—but that too is a curse, as it’s almost inevitable that a backlash will transpire, and Sunni civilians will suffer.

Unfortunately, Mosul is only one among many cities on the fault line of what increasingly appears to be an Iranian race to form a land bridge to the Mediterranean against periodic Sunni opposition. People will continue to suffer. Iraq’s central government is not, and will not be, capable of continuing to safeguard the area from falling further into the hands of jihadists. And the flawed counterinsurgency tactics of the West mean that the jihadist threat will merely go dormant until the next opportune moment.

Mitchell Blatt is a journalist based in Seoul, South Korea. He has been published at the Washington Examiner, the Daily Caller, the Hill and the Federalist, among other outlets. He tweets at @MitchBlatt. Sumantra Maitra is a doctoral researcher at the University of Nottingham, UK. His research is in great power-politics and neorealism. You can find him on Twitter @MrMaitra.

Image: Smoke billows from the ruined Grand al-Nuri Mosque after it was retaken by the Iraqi forces at the Old City in Mosul, Iraq June 29, 2017. REUTERS/Erik De Castro​