Withdrawing From the INF Treaty Was the Easy Part 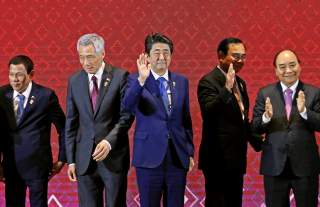 The United States recently left the Intermediate-Range Nuclear Forces (INF) Treaty, in part to deploy new conventional missiles in the Asia-Pacific Theater to deter China. But countries there refuse to host the missiles, largely because they fear Chinese retaliation without American backing. This episode suggests that Washington must better compete with Beijing to earn the allegiance of other countries as part of their struggle for regional leadership.

Inked during the Cold War, the INF Treaty banned Washington and Moscow from possessing ground-launched missiles—whether conventional or nuclear—with ranges between 500 and 5,500 kilometers. On August 2, 2019, following accusations of Russia violating the INF Treaty, the United States withdrew from it.

Many experts applaud the INF Treaty’s demise, particularly given its deleterious effects in the Asia-Pacific region. While the United States honored that agreement for thirty-two years, nonsignatory China developed the world’s most lethal arsenal of missiles covered by it, including some designed to strike moving warships and military bases as far from China as Guam. Beijing’s missile-striking distance outstrips the range of fighter jets launched from American aircraft carriers. If those vessels sail close enough to China to enable aircraft strike sorties, then the aircraft carriers become easier to sink. And although U.S. submarines can hide in Chinese waters, then they arguably cannot launch enough conventional missiles to imperil China. That is because the submarine fleet is too small and vulnerable when firing. Thus, America’s need for conventional, land-based missiles deployed around China has grown.

Less than two weeks after leaving the INF Treaty, the United States tested a conventional missile that was previously banned by the agreement and announced its desire to deploy such missiles in the Asia-Pacific region. Guam is a relatively easy location to place these missiles. As a U.S.-controlled territory and home to multiple military bases, domestic opposition and fear of being cut off from the Chinese economy are unlikely to preclude missile-hosting. Yet, Washington cannot credibly threaten Beijing from a single (small) site because its military assets on Guam can be overwhelmed by the sheer volume of China’s missiles. The United States thus seeks dispersed conventional missile deployments in Australia, Japan, the Philippines, and South Korea.

But Washington’s regional partners refuse to host U.S. intermediate-range conventional missiles, mainly because they fear Chinese retribution. China has threatened “consequences” and warned that “everything will be on the table” if its neighbors host these missiles. The threat is credible, given Beijing’s pattern of punishing countries for taking actions it does not like. Consider the following examples:

·         China cut off rare earth mineral exports to Japan in response to a territorial dispute.

·         China blocked Vietnam and the Philippines from oil and gas exploration near their coasts because China claims those waters and any natural resources beneath.

·         Due to Taiwan electing an independence-leaning president, China has interfered in the island’s subsequent elections, poached its allies, sent fighter jets into its airspace, and squeezed its economy.

If the fear of Chinese strong-arming causes countries in the Asia-Pacific region to acquiesce to Beijing’s demands, then the balance of power in that region will shift towards China. This risk grows with any perception that Washington will not back its partners against Beijing, even when they have incurred China’s ire by supporting the United States.

Unfortunately, this troubling dynamic already exists. For instance, in 2017, Washington convinced Seoul—after years of prodding—to deploy an American-made missile defense system (THAAD) on its soil. The move made South Korea safer from North Korean missile attacks to the benefit of the United States and Japan, because their missile defense systems could couple with South Korea’s THAAD and make all systems more effective.

The United States did nothing. Facing Beijing’s pressure alone, Seoul succumbed: it refused to acquire the remaining parts of its THAAD deployment, passed up coupling with America’s and Japan’s missile defense systems, and balked at a three-way military alliance with those countries.

President Donald Trump “must repair the damage caused by America . . . [merely] watching South Korea bow to China on missile defense. Asian ‘swing states’—countries deciding whether to follow the United States or China as they compete for regional leadership—are anxiously watching.”

After observing Washington’s behavior, countries in the Asia-Pacific region have increased their cooperation with China, called for their own nuclear weapons (rather than relying on America’s to protect them), and rejected hosting America’s intermediate-range missiles. They have done so primarily because America has not convincingly demonstrated its commitment to them in the face of an increasingly powerful and aggressive China. Perhaps this is because Trump skipped important summits with them while praising the leaders of China and North Korea, has not filled the vacuum left by his withdrawal from the Trans Pacific Partnership, and ignored the ongoing Japan-South Korea dispute until it spiraled out of control. Or it could be due to him suspending U.S.-South Korea military exercises, expressing a desire to remove U.S. troops from South Korea, and then demanding that Seoul pay Washington five times more to continue stationing American soldiers there. To some, the administration’s treatment of Kurdish allies in Syria and democracy protestors in Hong Kong has confirmed the suspected American retrenchment.

Whatever is causing these countries to doubt the United States, and whether it is reasonable for them to do so, the fact remains that consequences are bubbling up from perceived American detachment. To correct course, the United States must assure its partners that it will not abandon them when things get tough but without encouraging their free-riding or reckless behavior. Closing the missile gap between the United States and China—and preserving American leadership in the Asia-Pacific—depend on Washington striking the right balance.

Paul J. Leaf is a regular commentator on U.S. foreign policy. He worked on defense issues for a think tank and is now an attorney at an international law firm.