In a World of Disarray, Africa Is Taking Steps Forward 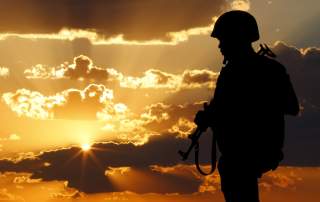 At this juncture in mid-2017, while the Middle East remains highly turbulent and global security challenges remain acute from Korea and East Asia to Ukraine and Afghanistan, what is the state of security in Africa? A continent of fifty-four nations, ranging from the Arab regions of the north to the Sahel region and a number of subzones in Sub-Saharan Africa, there are of course many stories to tell. But three stand out. The net assessment for the continent as a whole, while far from rosy, has a number of promising dimensions.

First is the state of terrorism and extremism. This remains a tough and disturbing story, overall. Countries from Mali to Libya to Somalia have been afflicted, by Al Qaeda in the Islamic Maghreb, ISIS, and Al-Shabaab among the key perpetrators. Terrorist attacks have also occurred in places such as Kenya and Burkina Faso. It is hard to talk of improvement in any of these places. At least things are not getting worse on balance. Indeed, there has perhaps even some slight improvement in Nigeria in particular, where the fight against Boko Haram continues (and occasionally spills over slightly into neighboring countries like Cameroon), but where the International Institute for Strategic Studies reports a reduced fatality rate relative to 2015.

Second is the state of civil war and famine in several key countries in the general east-west swath of land that includes the semi-arid Sahel region of Africa. This is a tragedy happening before our eyes in real time. It involves a belt of nations overlapping with some of the countries suffering from terrorism and extremism. The Sudans, Central African Republic, Somalia and Nigeria are among the worst hit, with parts of these countries collectively now containing more than 15 million people at acute risk of starvation. Beyond the specific risks from famine, South Sudan continues to devour itself in pointless and petty violence that involves huge numbers of sexual crimes as well.

Other conflict zones in this swath of countries may be faring slightly better. Sudan does not have the degree of infighting it suffered a decade ago, even if it is far from peaceful. On June 19 of this year, the Central African Republic’s government and thirteen of the fourteen armed groups in the country signed an accord to end ethnic and religious conflict. However, it is too soon to know if this will lead to a meaningful trend towards stability.

Third is the continent writ large, encompassing the majority of the nations in Africa. Most of it is more peaceful that it has been, on average, since the waves of independence in the late 1950s and 1960s or during most of the Cold War and then the 1990s. On balance, Africa is slightly more stable (and somewhat more democratic) than ever before in modern times.

Of course, this is a provisional judgment—and whatever peace may be breaking out coexists near lots of ongoing conflict and also requires many peacekeepers to sustain. Indeed, there are currently eight United Nations peacekeeping operations in Africa: UNMISS in South Sudan, UNISFA in the disputed Abyei region, UNAMID in Darfur, MONUSCO in the Democratic Republic of Congo, MINUSCA in Central African Republic, MINUSMA in Mali, UNMIL in Liberia and finally MINURSO in Western Sahara. Overall, there are over 92,000 personnel serving in UN peacekeeping operations in Africa.

In addition to collaborating with the UN in Darfur, the African Union has two active peace operations: AMISOM in Somalia, and the Regional Cooperation Initiative for the Elimination of the Lord’s Resistance Army (RCI-LRA). There are over 22,000 deployed AMISOM personnel, with most of its troops coming from Uganda, Burundi, Djibouti, Kenya, Ethiopia and Sierra Leone. RCI-LRA has a Regional Task Force of over 3,000 soldiers from Uganda, South Sudan, DRC and CAR.

Political tensions over transfers of power, or more commonly, the absence of a transfer of power, make things dicey in several other countries, too. Too many leaders are holding onto power indefinitely, either through sham elections or no real elections at all, or the dominance of political organization and process in their respective countries that allows them to get elected more or less indefinitely. Not only DRC and Burundi, but Rwanda, Uganda, Zimbabwe and Angola are notable examples of this dangerous trend. Even in a relatively benign case like Paul Kagame’s Rwanda, where the strongman leader has undoubtedly delivered much for his country, the tendency towards a “presidency for life” pattern of behavior puts democracy—and national stability—at risk.

Indeed, eight presidents in Africa have now amassed more than 229 years in power between them. These include: Eduardo dos Santos from Angola (thirty-seven), Teodoro Obiang Nguema from Equatorial Guinea (thirty-seven), Paul Biya from Cameroon (thirty-three), Idriss Deby from Chad (twenty-six), Denis Sassou-Nguesso of Congo-Brazzaville (thirty-two), Yoweri Museveni of Uganda (thirty-one), Paul Kagame of Rwanda (seventeen) and Joseph Kabila of the DRC (sixteen). Beyond just these cases, Africa’s trend towards democracy, after an impressive period of improvement in the 1990s and 2000s, has plateaued: Freedom House ranked four African countries as free in 1998, eleven as free in 2007, but only ten as free in 2016.

There are more hopeful political stories too, of course. In January 2017, former Gambian President Yahya Jammeh left the country after twenty-two years in power, marking the first president to peacefully hand over power in Gambia since its independence from the British in 1965. The Gambia’s peaceful transition of governance gives hope for future democratic elections. More significantly, a successful election in Kenya in August could give the cause of African democracy a substantial boost.

Southern Africa, including Angola and Mozambique, remains fairly quiet in terms of conflict if not necessarily politics. Most of West Africa is moving well beyond the civil wars of the 1990s and 2000s (and the Ebola crisis of 2014). Ethiopia, the continent's second most populous state, may have quieted down somewhat after significant unrest a couple years ago.

On balance, there are ample troubles today in Africa, as always. Yet fatality rates are down more than half relative to the 1990s, according to data from the Peace Research Institute of Oslo and Uppsala University in Sweden among others (and economic growth rates, while slower the last couple years, have typically reached 4 to 5 percent annually in the 2000s, after decades of far worse performance). Overall, in a world characterized by disarray, it may be somewhat risky but still fair to venture that Africa continues to move gradually if fitfully forward.

Michael O’Hanlon is a senior fellow at the Brookings Institution. Emily Terry is an intern with the Brookings Africa Security Initiative.