World War I Is More Than Trenches in France 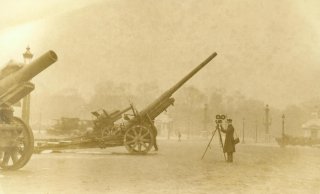 Today—the eleventh hour of the eleventh day of the eleventh month—marks the centennial of the armistice concluding the First World War. Your humble correspondent traveled to Kansas City, Missouri, last week to offer remarks as part of “1918: Crucible of Conflict,” the centennial symposium at the National World War I Museum and Memorial. After two days of listening to learned commentators hold forth about sundry dimensions of the war, the armistice, and the interregnum between the world wars, it’s clear the Great War still casts a long cultural shadow.

False lessons of history could beget bad decisions in the here and now, while wise lessons bolster our chances to excel. History isn’t just of antiquarian interest on this centennial day. It’s essential to executing foreign policy and strategy well.

James Holmes is J. C. Wylie Chair of Maritime Strategy at the Naval War College and coauthor of Red Star over the Pacific (second edition due out next month). The views voiced here are his alone.