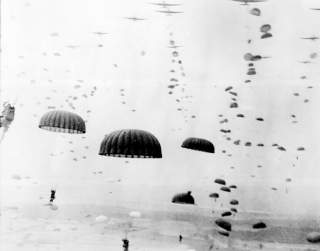 In the fading summer days of September 1944, the Allies pondered how to deliver the final deathblow to the Third Reich.

Just four years earlier, as Nazi troops had goose-stepped through Paris, Hitler appeared on the verge of winning the war. Now with bewildering speed and poetic justice, the Allies had broken out of the Normandy beachhead in July 1944 and swept across France and Belgium, just as Hitler's panzers had scythed through the hapless French in 1940.

As American soldiers crossed the German frontier, victory seemed so tantalizingly close that many Allied soldiers dared to hope that the war might—oh, Lord, just might—be over by Christmas. Perhaps they could stamp out the evil of Nazism and still survive to return home to their jobs and families.

But the inflexible laws of logistics cared little for hopes or righteous crusades. Every mile that the Sherman tanks rolled east toward Berlin, was one mile further from their supply depots in Normandy. Every bullet, bean and gallon of gas the troops consumed had to be shipped to France. Yet Allied hopes of capturing French and Belgian ports intact were dashed by the sacrificial troops Hitler left behind to garrison them. Those ports that were captured were so thoroughly demolished by German engineers that months would elapse before ships could unload. Nor could the Allies utilize French railroads, which had been so pulverized by Allied bombers that neither the Germans—nor the Allies—could use them.

Who Gets the Gas?

The only means of sustainment was hauling supplies by truck all the way from Normandy to Germany, courtesy of around-the-clock convoys such as the famous African-American drivers of the Red Ball Express. The task was more than arduous. It was impossible. Even if 1,200 British trucks had not been crippled by faulty pistons, there were simply not enough trucks, tires, or drivers to supply millions of men with sufficient fuel, ammunition and food to continue an all-out advance. Even the vaunted American artillery had to restrict itself to firing a paltry few shells a day.

Just as final victory seemed imminent, the Allied drive began to sputter to a halt. Now the question was who would get what limited supplies there were. Just as the Allied generals waged war against the Germans, they battled amongst themselves with equal ferocity. U.S. General Dwight Eisenhower, the Allied supreme commander in Northwest Europe, favored a broad-front strategy that strove to wear down the Germans by relentless attacks up and down the line. In contrast, British Field Marshal Bernard Montgomery, commander of the British-Canadian 21st Army Group, vigorously urged a narrow "butter-knife" thrust straight to Berlin.

The British thought Eisenhower a military ignoramus who didn't understand that armies should be concentrated to achieve a breakthrough; the Americans dismissed Montgomery as an egotistical glory-hound who didn't care which army beat Hitler as long as he was the one commanding it.

As subsequent events would show, Eisenhower had the more astute grasp; the Germans were too skilled and aggressive at counterattacking and pinching off narrow thrusts. Nonetheless, Montgomery had a point. Only a portion of the Allied armies could get enough supplies for an attack (in part due to Montgomery's own failure to capture the vital Belgian port of Antwerp). Meanwhile, the clock was ticking. The Allies had to cross the enormous barrier of the Rhine River, the natural bulwark guarding western Germany. But each day that passed was one more day for the German armies to regroup, and for the rain and snow to come.

There came a plan, and from a most unexpected source. The famously methodical Montgomery had made his reputation in North Africa by so carefully arranging his battles, with such overwhelming superiority, that he could not lose. To British soldiers who had been kicked around by Rommel for two years, he brought confidence. To aggressive American generals like Patton, he was a rabbit in tiger's clothing.

This time the rabbit surprised them. Montgomery proposed a bold offensive. A British corps would outflank the German Siegfried Line fortifications by advancing across Holland and crossing the Rhine at a lightly defended point.

The only problem was the numerous rivers and canals crisscrossing Holland. What would stop the Germans from blowing up the vital bridges and stalling the British tanks in their tracks?

Montgomery's plan called for a carpet of airborne troops (Operation Market) to seize the bridges along a 64-mile corridor from the Allied starting positions to the town of Arnhem on the lower Rhine. The paratroopers would hold the corridor open while the British 30th Corps staged an armored advance (Operation Garden) that would reach Arnhem by the fourth day.

The plan said much about how far airborne troops had evolved. In 1940, America had just a single airborne platoon. By 1944, the Allies had an entire parachute army. The First Allied Airborne Army was something unprecedented; three American and two British airborne divisions, plus a brigade of Polish paratroopers.

Like much else in the art of war, the Allies had learned this from the Germans. Hitler's daring airborne operations in Norway and Holland in 1940 had captured the imagination of their enemies, as did the seizure of Crete in 1941 by 10,000 Fallschirmjaeger. Perhaps the Allies might have reconsidered had they known that the German paratroopers had suffered such heavy losses at Crete that Hitler forbade further airborne assaults.

A Bridge Too Far

At first, Montgomery's confidence seemed justified. The initial airdrops on September 17 went smoothly. Unlike the night airborne landings in Sicily and Normandy that scattered troops far and wide, Market-Garden was a daytime drop mostly unmolested by German fighters and flak.

Yet if the gods really do punish hubris, then Operation Market-Garden is the proof. Despite the initial success, events quickly turned sour. Some misfortunes were just bad luck. Bad weather and insufficient transport aircraft hindered reinforcement and resupply of the paratroopers. The Germans quickly recovered the complete plan of the operation from a dead Allied officer, thus eliminating the biggest advantage of airborne operations—the surprise and confusion they sow among the enemy.

But the real problem was a fundamentally flawed plan. The British 1st Airborne Division was smaller than its American counterparts, yet it was tasked with capturing Arnhem, the furthest and most vulnerable objective (thus the famous quote from the British general who muttered that this was "a bridge too far"). Allied commanders then disregarded intelligence that two SS panzer divisions had been sent to the area for refitting, including the 9th SS Panzer at Arnhem. They were badly understrength, but their tanks and armored cars were more than lightly armed paratroops could be expected to defeat.

Woe compounded upon woe. The Red Devils of the 1st Airborne were also dropped too far from Arnhem. Only a single battalion could occupy the bridge and the surrounding town, and it was promptly surrounded by German armor and infantry. The 1st Airborne's radios were weak and set to the wrong frequency, so the division could not communicate amongst itself or call for air support.

Speed was of the essence to relieve the isolated paratroopers, yet the Allied ground offensive learnt a lesson obvious to anyone who has driven to the beach on a holiday weekend; funneling thousands of vehicles down a single highway creates massive traffic jams. Allied tanks also could not maneuver off-road due to the marshy terrain, so that repeated German ambushes could knock out the lead tank and block the entire column. Such a narrow corridor was also vulnerable to the inevitable German counterattacks. There was a reason the road was called "Hell's Highway."

Complacency ruled where urgency was needed. American paratroopers were furious to see British tank crews halting for tea breaks on the road to Arnhem, or refusing to advance at night.

Nonetheless, there was heroism aplenty—the 82nd Airborne paratroopers who launched an impromptu amphibious assault across the Waal River under murderous fire. The Polish brigade dropping into the embattled Arnhem airhead. And most poignantly, the last stand of the British 2nd Parachute Battalion at Arnhem, stubbornly fighting from burning building to burning building as the monstrous Tiger tanks blasted them from their positions.

Amazingly, Market-Garden still came close to success. The ground troops did reach the west bank of the Rhine, but only on the ninth day of the operation, just in time to evacuate the surviving 1st Airborne paratroopers from the inferno on the other side of the river.

In the end, it was all for naught. The Allies lost their chance to bounce the Rhine. Carving a 60-mile corridor to nowhere was poor recompense. The war in Western Europe would drag on for another eight months.

Allied paratroopers would make one more massive landing during Operation Varsity, which supported the Allied crossing of the Rhine in March 1945. Some 16,000 paratroopers were dropped, but this time so close to friendly ground forces that some questioned why the airborne operation was even necessary.