Would Appointing Barbara Lagoa to the Supreme Court Win Florida For Donald Trump? 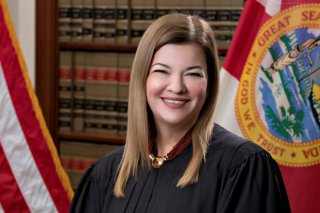 President Donald Trump faces some daunting obstacles to reelection. His law and order message has failed as he continues to lag in the polls behind former vice president Joe Biden. He’s also raising much less money for his campaign than Biden. But there is a move he could make that might help boost his electoral chances: nominate fifty-two-year-old Judge Barbara Lagoa to the Supreme Court and play the Republican version of the identity politics card.

Trump desperately needs to win Florida with its twenty-nine electoral votes to defeat Biden. It would be hard to think of a pick that would go over better in Trump’s new home state than Lagoa, a Cuba-American who currently serves on the 11th U.S. Circuit of Appeals. The Senate confirmed her to the 11th Circuit by a vote of 80-19 in 2019. A graduate of Columbia Law School and a devout Catholic, she has compiled a solidly conservative record as a judge. She first emerged in the public spotlight when she served as a member of a legal team on behalf of Elian Gonzalez’s American relatives in 2000. They fought unsuccessfully to keep him from reuniting with his father in Cuba. Her bona fides in Miami’s Cuban community could not be stronger: her parents fled Cuba in 1966 as part of a “freedom flight.” Florida Governor Ron DeSantis is telling all and sundry in the Trump White House that she is it. Rep. Matt Gaetz declared, “If the president picks Barbara Lagoa, they will be dancing salsa with joy in Hialeah well past November.”

Her record may not be enough to persuade hard-line conservatives that she will be fully reliable. Sen. Josh Hawley has stated that he wants someone on record who has already voiced his or her opposition to abortion. She would be more of a stealth candidate. As Politico reported, “Lagoa’s views on abortion are little known. She had no high-profile rulings on the matter in the nearly 500 decisions she wrote as a state appeals court judge or in other decisions during her brief time on the Florida Supreme Court justice and, since late last year, a judge on the U.S. 11th Circuit Court of Appeals. However, when she was vetted for her federal judgeship, she told the Senate she considered Roe v. Wade the “binding precedent of the Supreme Court” and “settled law”—echoing phrases used by Justice Neil Gorsuch and Justice Brett Kavanaugh when their nominations were being vetted.

“For lower court judges, all Supreme Court precedent, including Roe v. Wade ... is settled law,” she wrote in her questionnaire. “If confirmed, I would faithfully apply this precedent and all other precedents of the Supreme Court.”

Would she? It would be an open question. But it won’t matter to Trump whose alliance with Christian evangelicals is purely a matter of tactical convenience. So far, the arrangement has worked well for each side. But Trump won’t give a fig whether or not Lagoa ultimately votes to overturn abortion laws or not. What matters to him is something else—appealing to Hispanic voters in Florida to cut into Biden’s numbers. Even wooing a small percentage of Hispanic voters away from the Biden camp could be enough to help put Trump over the top in November.

It’s also the case that nominating a Cuban-American will put the Senate Democrats in a bit of a pickle. They will stand on their ground that the Senate shouldn’t consider any candidate until January 20, 2021. But Lagoa’s background and minority status will render it a lot more difficult for Senate Democrats and progressive organizations to attack her personally. Notre Dame’s Amy Coney Barrett, by contrast, presents a more target-rich environment. In 2006, she told a Notre Dame graduating class, “Your legal career is but a means to an end, and... that end is building the kingdom of God... if you can keep in mind that your fundamental purpose in life is not to be a lawyer, but to know, love, and serve God, you truly will be a different kind of lawyer."

Trump will come under pressure from Federalist Society conservatives to pick Barrett, a known quantity who will be greeted rapturously by his base. But his political advisers are likely to ponder the pluses of Lagoa. Trump’s choice could help determine his fate in November.