Would Russia Destroy the World Over Ukraine? 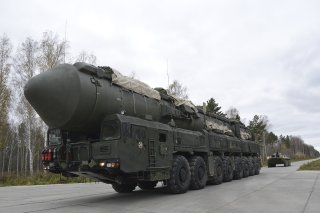 Some three decades after the end of the Cold War and the collapse of the Soviet Union, the United States and NATO are facing the dangers of possible nuclear war, a development that may end up rivaling the Cuban Missile Crisis of 1982 for high drama. Critical to the future outcome of the current conflict over Ukraine is the answer to the following question: just how serious are Russia’s nuclear threats against the United States and NATO?

According to President Volodymyr Zelenskyy of Ukraine, Russian president Vladimir Putin’s nuclear threats are bluff, a point echoed by a former Russian premier who also says Putin is not serious about threatening nuclear force in the Ukraine theater.

However, Russian foreign minister Sergei Lavrov is less sanguine. He says World War III will be a war with nuclear weapons, implying that the current conflict could easily spin out of control. Numerous other official Russian government statements have also been explicit that Russia’s response to any NATO nation interfering in the conflict over Ukraine will result in “consequences never seen before,” implying that nuclear weapons would be employed by Moscow.

Mark Schneider, a leading American expert on Russian nuclear issues at the National Institute for Public Policy, wrote me a note explaining that each of the last three administrations—from Barack Obama through Donald Trump and now Joe Biden—has acknowledged that Russia has adopted a policy of using a limited nuclear weapons strike to bring a crisis or conventional conflict to a close on terms favorable to Russia. All of this has focused attention on nuclear deterrence, with emphasis on U.S. extended deterrence over NATO allies as well as U.S. allies in the Western Pacific, including Korea, Japan, and Taiwan.

Russian government sources also note that Moscow has nuclear advantages in the types of nuclear weapons it can bring to the Ukraine theater, especially in terms of the speed with which such weapons could be delivered.

During his testimony on Capitol Hill, Strategic Command head Admiral Charles Richard stated that the United States’ planned nuclear modernization was considered the minimum capability required to meet the growing cooperative threat from both a nuclear-armed China and Russia. This implies that additional nuclear modernization efforts could be warranted to better deter Russian threats.

It has been said that one indication of Moscow’s seriousness is whether Putin has actually ordered his nuclear forces to a higher state of alert. Although it is unclear to the extent that Russia has operationally changed the deployment of its nuclear forces, most can already be fired from their current or normal peace-time positions without necessarily being redeployed from their mobile missile garrisons, seaports, or airfields. Thus, as Peter Pry explains, whether such systems’ postures remain unchanged is not indicative of Moscow’s intention or ability to use them.

The question, therefore, is less about Russian moves and more about whether U.S. deterrent capabilities, whether conventional or nuclear, remain sufficiently credible to keep Moscow from escalating the conflict to the nuclear level.

Unfortunately, arms control is no help here either. Unlike Russia’s long-range strategic systems, its stockpile of tactical nuclear weapons, reportedly some 2,000-strong, is not constrained by any arms control limits. Moreover, given Moscow’s threat to use only a limited number of such weapons, Russia has more than enough nuclear weaponry on hand to engage in nuclear use in Europe.

The larger context of the second Russian invasion of Ukraine is Moscow’s long-standing objective of destroying NATO—in addition to neutralizing Ukraine, despite the latter not yet being a NATO member. However, considering that Moscow has no acceptable off-ramps short of victory, the United States is now facing the serious task of deterring the use of nuclear weapons in a regional conflict. Further, perhaps the gravest challenge facing the United States is ensuring that the current conflagration that Putin started does not expand beyond Ukraine into the Baltics and other independent friends of the United States. Should the United States fail to respond to Putin’s nuclear threats out of fear of triggering Armageddon, NATO may perish then and there as its constituent members individually seek security deals with Moscow to prevent further conflict.

A final consequence worth considering is what China will conclude in response to NATO’s potential impotency. Will the Chinese Communist Party’s leadership take NATO inaction as reflective of the United States’ willingness to defend Taiwan?

Thus, three decades after the end of the Cold War, the United States is now in an even more dangerous place than it was before. For Washington is no longer facing just one nuclear-armed, totalitarian adversary, but two. And the question of whether their leaders’ aspirations of hegemony can be deterred by the prospect of untold thousands of deaths has never been more uncertain.

Peter Huessy is President of Geostrategic Analysis, Senior Fellow at the Hudson Institute, and Senior Visiting Fellow at the Atlantic Council. These views are his own.