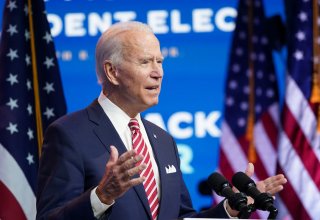 President-elect Joe Biden called on Congress last week to “immediately” forgive the first $10,000 of anyone’s student loan debt amid the coronavirus pandemic that has left millions of Americans unemployed and swamped in bills.

Biden’s higher education plans support the debt relief provision, as he also endorsed a House legislation that pushed for the same.

“Immediate $10,000 forgiveness of student loans,” Biden said last week, referring to debtors struggling during the pandemic. “They’re having to make choices between paying their student loan and paying the rent . . . It should be done immediately.”

But with Democratic control of the Senate still dependent upon the Georgia runoff election results that won’t be determined until January, it’s uncertain if the legislation would pass. Some Senate Democrats, however, have urged Biden and his incoming administration to pass an executive order that would unilaterally forgive loans—a motion that’s been somewhat rejected by the president-elect’s team, as they encourage congressional action to tackle the issue.

Although the forgiveness measure would aid borrowers who wrangle with repayment, there are “layers upon layers of problems” contested by economists, consumer activists and policy experts with forgiving student debt to form an economic stimulus.

Economic Boost Would Be Lower Than Expected

The cost of higher education has increased over the past few decades, pushing America’s outstanding student loan debt balance to roughly $1.6 trillion with 45 million borrowers.

While an “entire generation has been set back,” as millennials are predicted to be poorer than their parents with loan payments postponing retirement, housing purchases and building families, canceling student loan debt would have little impact on consumer spending

Typical borrowers pay $200 to $300 per month in repayment for their loans over the course of ten, fifteen or sometimes thirty years. Debt cancellation wouldn’t just grant a borrower, for example, a $30,000 check. Rather, it would “relieve them of their monthly interest and principal payments” and “increase their available cash by only a fraction of the total loan forgiveness,” according to a report by the Committee for a Responsible Federal Budget.

The committee estimated that the burden of a student loan debt annulment would amount to $1.5 trillion, with an increased cash flow of just $90 billion per year.

In other words, it would only eliminate a small monthly payment for debtors and provide minimal economic uplift that wouldn’t outweigh the aggregate costs of the forgiveness plan.

High-income households owe almost 60 percent of the outstanding education debt, with 56 percent held by those who pursued a graduate-level degree.

Most of these student-loan borrowers don’t urgently need a forgiveness plan, as undergraduate and graduate degrees typically correlate to higher-paying jobs, and the debtors likely have been able to sustain a stable income during the current economic crisis.

The committee’s report also noted that Americans who took a financial hit during the pandemic had “little or no student debt.” More than 70 percent of unemployed workers don’t hold a bachelor’s degree, with 43 percent having no collegiate experience. Less than 33 percent of student loan debt is held by households that don’t have an undergraduate degree, with less than a tenth held by those without a college education.

So, the majority of debtors making monthly payments can actually afford them, and a forgiveness plan wouldn’t alleviate a massive financial blow.

When the CARES Act passed in March, the Department of Education suspended federal student loan debt monthly payments and paused accruing interest to reduce the burden imposed on Americans as a result of the seething health crisis.

In August, President Donald Trump signed an executive order that extended the provision through December, and it’s rumored that he’ll provide an even longer deferment period.

According to the committee’s report, “Extending this policy would generate most of the economic boost that would come from debt cancellation, but at only a small fraction of the cost.” With the current economic downturn, a temporary pause in repayment could offer an immediate boost into the economy, as households would pivot the recovered funds towards food, medical bills or other needs to combat the pandemic, pumping money into the market.

But Biden’s higher education plan and Democratic House push calls for student loan forgiveness, a legislation that would, in fact, help those struggling during the current economic crisis. The plan, however, “would also instantly create a world of student debt winners and losers, divided by an arbitrary date” or set the precedent for expectations for “future jubilees” of debt annulment.

The student loan debt borrower data reveals that loan forgiveness would not solve the problems confronted by most Americans struggling during the pandemic, as the majority of student loan holders have either an undergraduate or graduate degree, making them more financially secure and placing them in a high-income household. A forgiveness plan would also not form an expected economic stimulus, as the cost of eradicating student loan debt would outweigh its cash flow, or benefits into the economy.