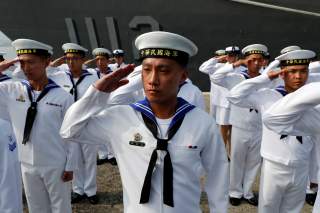 Policymakers in the United States have long believed that U.S. assistance to Taiwan, such as arms sales and an implicit promise to militarily assisting Taipei if China invades Taiwan, is critical to maintaining the peace and security across the Taiwan Strait. Such belief, however, has recently been challenged. Rapid advancements in the People’s Liberation Army’s (PLA) military technology and capabilities along with the worsening U.S.-China and cross-Strait relations have made it costlier for the United States to defend Taiwan. Since China perceives Taiwan to be a part of its territory, many in the United States worry that a conflict across the Strait could escalate into a nuclear confrontation when the United States is involved. To prevent such a scenario from happening, some even advocate using Taiwan as a leverage to exchange for compromises with China.

U.S. concerns are merited. In many ways, Taiwan has failed to live up to its promises to enhance its security. For example, Taiwan’s defense budget under the previous president, Ma Ying-Jeou, from 2008-2016 never hit the threshold of 3% of GDP, delaying critical military procurements from the United States. In the meantime, Taiwan’s transition to an all-volunteer military force has also been deemed unsuccessful, as the public has little enthusiasm for serving in the military. These developments lead the United States to question Taiwan’s determination to defend itself. The United States wonders if the island is shirking its responsibility of self-defense and putting the burden of defense solely on the United States. It is thus of little surprise that the United States is getting more concerned about a potential conflict across the Strait.

Such perceptions are harmful for U.S.-Taiwan relations. Currently, as the rapprochement across the Strait quickly dissolved after the current President Tsai Ing-Wen came into office, China has been increasing its pressure on limiting Taiwan’s international space and continuing its threat of force to “liberate “Taiwan. At this juncture, the U.S. security guarantee to Taiwan is more important than ever. The U.S. security promise to Taiwan may help generate morale among Taiwanese citizens and in return, enhance their willingness of self-defense. Therefore, it is Taiwan’s responsibility to demonstrate to the United States that first, it is serious about self-defense, and that, second, U.S. assistance is critical for public morale in Taiwan in a potential conflict with China.

The current Taiwanese administration has made efforts to shore up the U.S.-Taiwan relations on the first front. Taipei has successfully proceeded with significant arms sales under the Trump administration and is planning on revitalizing domestic weaponry manufacturing. Several key pieces of U.S. legislation have also paved the way for advancing U.S.-Taiwan relations, and Taiwan is evaluating proposals for providing U.S. port calls in Taiwan’s harbors and even for participating in military exercises with the US.

However, whether U.S. help at a time of a crisis would boost public morale in Taiwan remains an open question. To answer this question, our team designed an internet survey and recruited 1001 Taiwanese adults who aged 20 years old and above. The sample has a certain level of national representativeness and was conducted by a polling center housed inside National Chengchi University in Taiwan from July 3-5, 2018. In our knowledge, this is the first survey that probed this question.

In the first question, subjects were randomly assigned to one of the four hypothetical scenarios:

Afterward, subjects were asked how willing on a 10-point scale they would “join the military or take action” to defend Chinese invasion.

First, the Taiwanese government’s declaration of independence does not affect the public’s willingness to fight; respondents’ willingness to defend China’s invasion remains the same level between Group 1 and Group 3 (4.84 and 4.82 on a 10-point scale) and between Group 2 and Group 4 (4.14 and 3.93 on a 10-point scale). This finding is surprising, considering that achieving full independence immediately has scant support among the public in Taiwan, as most believe that such a position would invite Chinese aggression. According to the latest poll conducted by the Mainland Affairs Council in Taiwan, 8.6% of respondent supports this stance. But here we find that the government’s calling for independence does not decrease support for defending Taiwan.

Third, the scenario that the United States will not assist Taiwan if it were invaded under the current status quo registered the lowest level of public support for self-defense, as 3.93 out of 10.

Our experiment generates profound implications for the triangular relationships between the United States, Taiwan and China (People’s Republic of China, PRC). Threats from the PRC continue to endanger the security of citizens in Taiwan. However, we show that, in the face of such adversity, Taiwanese citizens are more willing to confront military threats head-on, when the U.S. commitment to assist Taiwan is present. U.S. support for helping Taiwan, even simply in the forms of verbal commitment, has shown to motivate the public in Taiwan to be more supportive of defensive actions. A 2017 survey by the Taiwan National Security Survey (TNSS) showed that only 40.5 percent of respondents believed that the United States will come to assist if a war breaks out across the Strait. We can optimistically infer that if more people in Taiwan believe that the United States will come to our assistance, enthusiasm for self-defense should continue to increase. In short, it is in the interests of the United States to send reassuring signals to the public in Taiwan about the U.S. determination to assist and defend Taiwan. We advocate for such an effort because it is a good strategy at a low cost.

Austin Wang is an assistant professor in the Department of Political Science at the University of Nevada, Las Vegas.

Charles K.S. Wu is a Ph.D. student in the Department of Political Science at Purdue University.

Fang-Yu Chen is a Ph.D. candidate in the Department of Political Science at Michigan State University.