Would Trump Use the Bomb? 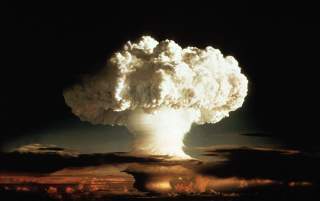 After the Helsinki Summit between President Donald Trump and President Vladimir Putin, certain fearful matters of “high politics” in American diplomacy are discussed only in whispers, so as to seemingly reduce the likelihood of any actual catastrophe. An evident example of this is the public’s persisting unwillingness to speak with one voice on what should by now be entirely obvious. U.S. President Donald J. Trump, in a direct consequence of his actions and temperament, could plausibly make irrational choices on nuclear matters. In turn, these critical strategic choices could result in (1) a “limited spasm” nuclear exchange; or (2) a full-blown nuclear war.

What would it mean for a president actually to become "irrational" in such circumstances? By any usual textbook definition, U.S. presidential irrationality would stipulate a personal ordering of preferences in which collective national survival was no longer considered the most highly valued crisis outcome. Although it is impossible to determine with any useful degree of precision if such an eccentric and potentially calamitous hierarchy could ever find operational favor with Trump, it still seems safe to reason that any such decisional inclination in the White House would be more-or-less effectively obstructed.

Also worth noting, however, is that even in the absence of authentic presidential irrationality, an American head of state could still commit certain decisive strategic errors that would lead America, however unwittingly, toward grave nuclear conflicts. Most worrisome, in this regard, would not be any sudden or "bolt-from-the-blue" enemy nuclear attack. North Korea, for example, has no credible intention to denuclearize and is likely enhancing its critical nuclear weapons and infrastructure. Instead, more concerning is the progressively uncontrollable processes of crisis escalation. Imagine a scenario with some sequential tit-for-tat strategic risk-taking that continuously accelerates during any ongoing military crisis.

During this prospective crisis bargaining, President Trump could suddenly and unexpectedly find himself under certain severely time-compressed decision-making urgencies, and thus having to walk an excruciatingly fine line between “escalation dominance” and national survival.

Also significant here is that decisional irrationality could occur simultaneously or exclusively on the adversarial side (e.g., Kim Jung Un), and that the U.S. president would need to be ever-mindful of this unavoidable corollary. Each side could commit predictive errors in judgment concerning the other side’s decisions, and at some point, this ominous mutuality could produce expressly negative synergistic results. This would signify destabilizing outcomes wherein the total or cumulative result must always be substantially greater than the simple sum of all relevant “parts.”

For Americans, especially after Helsinki, this is not a time for any traditional or visceral forms of presidential deference. Rather, it is entirely appropriate for Americans to finally inquire whether Trump is meaningfully prepared to deal with such perplexing decision-making pressures and whether he has in place a competent team of designated deputies. To date, it must be recalled, a great many essential positions still remain unfilled by the Trump administration.

This disturbingly high number is literally without recent historical precedent.

During the Cuban missile crisis, President John F. Kennedy—who did, in fact, assemble a markedly capable cadre of suitable advisors—ordered his “quarantine” of Cuba with a (since documented) awareness of accompanying risks. According to Theodore Sorensen, his official biographer, JFK sincerely believed that even his intentionally softened escalatory response (one that would be a less likely casus belli than a “blockade”) would carry conspicuously high odds of a nuclear war with the Soviet Union.

Was JFK acting rationally about nuclear deterrence back in October 1962? If he was, he must have been pretending or feigning irrationality. Or was his somberly imposed “quarantine” actually a true instance of nuclear decisional irrationality, one that turned out successfully only by sheer luck?

While the second explanation would have to acknowledge, among other things, Kennedy’s commendable negotiating skills, such an acknowledgment need not accurately predict or clarify any future presidential excursions into nuclear brinksmanship. In other words, Kennedy’s success in 1962 says little or nothing about Trump's future chances for bargaining success, even in promisingly similar circumstances. To be sure, moreover, any such expectation of similarity would still have to take close account of core differences between roughly the symmetrical nuclear superpowers during the Cold War, America and the Soviet Union, and the starkly asymmetrical nuclear capacities of the current-day United States and North Korea.

If JFK’s ultimatum had been a textbook example of the “rationality of pretended irrationality,” a tactic that plays out often in other spheres of human social and commercial interaction (remember Muhammad Ali and Sonny Liston, before their championship fight), it was still a recognizably first-time application at the “atomic level.”

There is more. America’s current president has frequently hinted at his special fondness for adopting “pretended irrationality” as a prospective negotiating stance. Nonetheless, he would be well advised to more fully understand the difference in stakes from his prior life in casinos and commerce. More precisely, there are substantially meaningful and vast differences between negotiating real estate or gaming transactions versus time-urgent crisis bargaining over existential nuclear threats in world politics.

Prima facie, on the absolutely core issue of possible U.S. presidential irrationality on nuclear weapons, it is conceivable that consequential missteps could become less likely over time. This comforting argument is founded upon the problematic assumption that steadily-accumulating White House experience could correlate favorably with increasing diplomatic caution. Still, the reassuring argument would have to be based upon a very flimsy “common sense” rationale. At best, therefore, and contra science, it would represent a contrived adaptation from earlier historical eras, ones wherein the stance could still have been suitably persuasive in America’s pre-nuclear past.

As the Cuban Missile Crisis ought to have revealed back in 1962, competitive strategic risk-taking in diplomacy can only be advantageous up to a point, but figuring out exactly where that specific point should be demarcated is by no means easy. In the particular case of Donald Trump, various additional complicating factors will need to be taken into account, including this president’s evident belief in his own decisional infallibility and his unhidden predilection for operating amid deliberately-generated disorder. In the worst case imaginable, this unambiguous preference for creating chaotic negotiating backgrounds would stem more-or-less from “behind the curtain” influence of Trump’s presidential counterpart in Moscow.

Let us be candid. After Helsinki, this influence could sometime prove unprecedented and overwhelming.

Nuclear strategy is a game that certain sane national leaders must somehow learn to play, however reluctantly, but never with any plausible or science-based assurance of identifying probable outcomes. This cautionary conclusion is largely “structural,” and has nothing to do with the particular intellectual capacities of any individual “players” in any specific contest. It rests firmly upon the incontestable assumption that scientific probabilities must always be based upon the discernible frequency of relevant past events. In essence, the only way this critical limitation could ever be removed or overcome is if, in the uncertain years ahead, some actual examples of specific nuclear escalations would accumulate.

Needless to say, this is hardly a “remedy” that any sane American president should ever wish to implement. For obvious reasons, it would be much better for this president to have to continue to concede an irremediable incapacity to “figure the odds” of any particular nuclear crisis ending up in a nuclear war.

Americans can’t yet decide just how likely it is that their current president would ever issue an irrational order to use American nuclear weapons (or how his opposite number in Pyongyang or elsewhere would behave). However, Americans can still advise that unprecedented nuclear dangers lurk menacingly in literally all of the more-or-less credible attack scenarios. As far as pretending to be irrational is concerned, this hugely problematic tactic could become an irreversibly double-edged sword for Trump. Also crucial here would be the president’s ability to finally overcome his apparently unceasing penchant to confuse bluster and bravado for creditable strategic bargaining.

“Everything is very simple in war,” said Carl Von Clausewitz famously, in On War, “but the simplest thing is still difficult.” Now, the presumptively “simplest thing,” within the nuclear decision matrix of Trump is to maintain full control of any and all military escalations. Yet, even this primary expectation could sometime prove unnervingly “difficult.” Fundamentally, as long as President Trump is able to avoid irrational decision-making during nuclear crisis negotiations, his biggest strategic challenge will be to ensure that any already ongoing escalation remains carefully-bounded and well-managed.

Significantly, although rarely if ever noted, this challenge would apply both in those cases where the United States had initiated the first move of war, and also where the U.S. president was acting “only” in retaliation.

More conceptually, in terms of von Clausewitz (who wrote most famously about “friction” and the “fog of war”), this daunting challenge means understanding (at absolutely all times) the vital distinction between “war on paper and war as it actually is.” If such an indispensable understanding were somehow lost during the bewildering circumstances of any intra-crisis nuclear bargaining, the worst could happen.

What transpired very recently in Helsinki should give us extra cause for very serious concern.