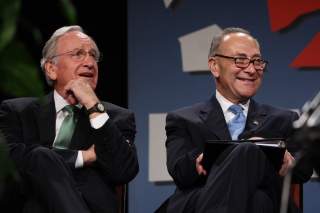 Democrats are finally starting to have second thoughts about Obamacare.

First it was Chuck Schumer, who openly wondered whether the party should have spent all its political capital on health care during the two years it controlled the elected branches of the federal government.

Now Schumer's heresy has been seconded by Tom Harkin, the retiring Democratic senator from Iowa. "We had the power to do it in a way that would have simplified health care, made it more efficient, and made it less costly, and we didn't do it," Harkin complained. "So I look back and say we should have done it the correct way or not done it at all."

Schumer pointed out that most people are happy with their health care and only 5 percent of registered voters lacked health insurance at the time the legislation was being debated. Insured middle-class voters thus felt neglected when the Democrats focused on health care, rather than the economy.

(You May Also Like: The 6 Best Presidents of All Time)

Both Harkin and Schumer are liberals lamenting what will likely be the Obama administration's main domestic-policy legacy. They are both now saying the Democrats blew it.

But now that the Democrats have lost the Senate, it is obvious that the flawed, "convoluted" health-care legislation will be the only big liberal legislative accomplishment of the Obama years.

Executive action on immigration and climate change may galvanize liberals, but neither move is as durable as changing the law. Both can be undone by a future Republican administration, or perhaps even an unfavorable court ruling.

(You May Also Like: The 5 Worst Presidents of All Time)

Obamacare isn't looking so sturdy, either. Come January, majorities in both houses of Congress will favor its repeal. Repealing the individual mandate, the employer mandate and IPAB all have bipartisan support.

The health-care law faces another legal challenge at the Supreme Court. The Halbig case could make Obamacare a very expensive proposition if the justices rule people who bought health insurance from the federal exchange are ineligible for subsidies.

Even without Halbig, a Wall Street Journal analysis found that Americans are spending 42 percent more on health insurance than in 2007. Obamacare isn't the only reason, but the law does mandate the purchase of more expensive health plans.

(You May Also Like: Obamacare - Nothing Short of a Disaster)

In 2009, Democrats made a tactical decision to sacrifice a large number of seats to pass a health-care bill. A few Jonathan Gruber gaffes later, they are starting to second-guess themselves.

Schumer helped build the Democratic congressional majorities of 2006 and 2008. Now those majorities are gone. Harkin is being succeeded in the Senate by a Republican, and a fairly conservative one at that.

Thus, it is fitting that they have both criticized Obamacare in the waning days of the Democratic Senate majority. Harkin in particular is saying it might have been worth it for single payer, but not for this.

Defenders of the law point to record-low health-care inflation, the fifth straight year health spending has risen by less than 5 percent. They also note that whatever happens to the health-care law, we are unlikely to return to the pre-Obamacare status quo.

A major step toward universal health care will consequently be part of President Obama's legacy and the fallen Democratic majorities' legacy, too. They will go down in history as having done what Democratic presidents from Harry Truman to Bill Clinton failed to do.

As the Democrats prepare to lose yet another Senate seat in the Louisiana runoff, they must ask themselves if it was worth it. And if there is a Republican president, House and Senate come 2017, the answer will no longer be as obvious as it was when Obamacare passed.

(You May Also Like: How One Man Could Obliterate Obamacare)

In fact, Democrats may conclude they gave up too much to pass what is essentially a national version of Mitt Romney's health plan.

If so, Chuck Schumer and Tom Harkin got there first.