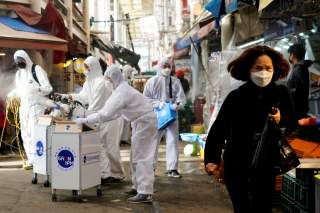 Desperate times call for desperate measures, especially if those desperate times were self-inflicted through misrule. Xi Jinping’s measures to contain China’s coronavirus pandemic, which is a biological Chernobyl, shows a typical Communist dictator’s behavioral pattern—rule by terror, violence and blatant disregard for human dignity. As a result of the top leader’s series of the missteps, the coronavirus pandemic spread quickly throughout the country, becoming akin to the 1986 Chernobyl nuclear accident. So far, the government announced over 2,444 people died, much worse than Chernobyl or the 2003 SARS pandemic. Most likely, the actual death toll is much higher.

From the very beginning, Xi’s anti-pandemic efforts turned into a political- and information warfare campaign to ensure the security of the regime. Thus, the cover up came first before public health or the chance to halt the pandemic.  When the regime could not conceal its disaster and the people were outraged at the Communist Party of China’s (CCP) failure, Xi employed the CCP's repressive security apparatus. He parachuted in two of his confidants, Ying Yong and Wang Zhonglin, to replace the party chiefs of Hubei province and Wuhan city. Both Ying and Wang worked in police and security apparatus for many years and are experienced in cracking down on dissents and maintaining political stability in the face of unrest. At the outset of their appointments, the security forces and stability apparatus were mobilized, including all aspects of China’s mass surveillance system. Law-enforcement officers and drones patrolled the streets looking for people who failed to wear masks or violated other measures. Xi also dispatched to Wuhan another confidant, Chen Yixin, who is the secretary-general of the Political and Legal Committee of the CPC Central Committee to oversee the roundup operation. As a result, there was a massive, arbitrary, and often violent round-up of tens of thousands of residents, which in turn exposed uninfected people to the disease. People are banned from going out, shopping for food, which is creating hardships for many people and in some cases leading to starvation.

Not surprisingly for followers of the CCP, there are many video clips detailing massive abuses of human rights in China during this terrible time, which adds salt to the deep wound of the Chinese people. Naturally, all the violence is done under the name of containing the coronavirus pandemic. People who failed to put on masks were handcuffed, tied up, slapped in the face, beaten up by police or red-banded guards on the streets, and dragged into quarantine vehicles. One city even chained together a few dozen of these unmasked “violators” and paraded them through the streets while reading out aloud the government quarantine regulations to terrorize other residents.

In Xiaogan City, Hubei province, a family of three had nothing to do during the lockdown period and decided to play Mahjong, a tile-based game, to entertain themselves. However, the quarantine enforcement team rushed into their house, slapped in their faces and smashed their Mahjong table. Another city forced those played Mahjong to carry the table around the city to humiliate them. In Fushui town of Anlu, a family of four were detained for playing cards at home during the lockdown and were forced to make public confession for their so called “violation.”

Under the campaign slogan, “prevent the pandemic at all cost,” China’s law and health enforcement have been using extreme violent measures against people, disregarding human dignity and human rights. In Xianning, a young man was tied to a telephone pole because he did not wear a mask. Then, the quarantine enforcer found a lady's underwear and forcibly put on the guy to publicly shame him. The absurdity often went too far. A Chinese netizen exposed that a person in a village in Hubei was infected with the coronavirus. His remaining family members were forced to parade around the village rather than immediately quarantined.

Even in more sedate provinces like Zhejiang, there have been cases the quarantine team padlocked the homes of the suspected patients, and even welded iron gates in front of their homes to block the entire families from coming out. A video also shows how Wuhan city throwing college students’ personal property like trash after their dorms were requisitioned for makeshift hospitals. Guangdong province has passed regulations to allow the expropriation of private property like a war time emergency.

In addition to violence against people, China’s law and health enforcement show no mercy towards pets. In a residential community in Xi’an, a resident took his dog for a walk, and the health enforcement team beat the dog to death. In Wuxi, a cat owner was quarantined and his community health team believed the cat might be carrying the virus, so they buried the cat alive. Many cats, dogs and other pets suffered the same fate throughout the country.

For those pandemic whistleblowers, such as eight doctors in Wuhan, those citizen journalists who reported truth about it, and activists who criticize the pandemic handling of Xi Jinping and the CCP regime, the regime has shown no mercy. This recalls Xi’s dictates to the CCP as he ordered the crackdown on Muslims in Xinjiang. The doctors were reprimanded.

The words, and memory of Dr. Li Wenliang—he was among the first to sound the alarm regarding the pandemic and later died from the coronavirus—are censored and banned. Two citizen journalists, Chen Qiushi and Fang Bin, are missing. Xu Zhiyong, a prominent scholar and activist, was detained after calling Xi Jinping “clueless” on the coronavirus crisis and demanding that he step down. The organizers and signers of several open letters have been demanding free speech, free press, and government transparency in its anti-pandemic were harassed and threatened.

The doctors at the forefront of the pandemic have also noted that their work has been altered by the so-called “CCP political correctness.” Recalling their Maoist antecedents, they have been forced to fabricate a higher number of recovered patients, casting doubt upon all of the statistics reported by China. Abuses and negligence in hospitals and quarantine are rampant. All of these signs show that terror, violence and other evils are rooted deeply in the culture of the CCP dictatorship.

The China coronavirus pandemic is 30 percent natural disaster and 70 percent a CCP-made catastrophe. Fundamentally, the pandemic has dispelled the myth of the “China model,” an omnipotent CCP competent handled every difficulty, evincing the superiority of its governance model in contrast to Western constitutional democracy.  Xi’s CCP has crossed a Rubicon:  the world will never look at the regime as the leader of a global future but only as its atavistic past.

Bradley A. Thayer is Professor of Political Science at the University of Texas San Antonio and is the co-author of How China Sees the World: Han-Centrism and the Balance of Power in International Politics. Lianchao Han is vice president of Citizen Power Initiatives for China. After the Tiananmen Square Massacre in 1989, Dr. Han was one of the founders of the Independent Federation of Chinese Students and Scholars. He worked in the U.S. Senate for 12 years, as legislative counsel and policy director for three Senators.