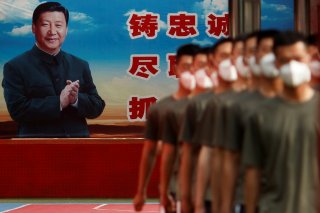 When Deng Xiaoping assumed leadership over China following Mao Zedong’s death, the country was in shambles. Himself having been a victim of Mao’s Cultural Revolution, Deng correctly saw the need for both political stability and reform. Starting in the early 1980s with the implementation of presidential term limits, and culminating in his lengthy transfer of power to Jiang Zemin, Deng hoped to “[establish] a retirement system” and prevent the rise of another unaccountable strongman who could make “mistakes.” While the economies (and in turn, governments) of other communist countries collapsed in the 1980s, Deng carefully reoriented China’s economy away from agrarian socialism and towards export-oriented protectionism. His famous maxim best summarizes China’s approach during this period: “hide your strength, bide your time.”

Deng’s successors, Jiang Zemin and Hu Jintao, both adhered to the “retirement” succession model. Both leaders also promoted cordial relations with the United States and pursued economic and technological modernization, taking care to avoid attracting Washington’s attention during its period of nigh unquestioned American hegemony. Now, however, China has become powerful, and is no longer willing to play second fiddle to the United States’ conception of global order. Xi Jinping, China’s current president, has rejected the retirement tradition and is consolidating power to levels unseen since Mao’s time. For the United States, this raises an important question: how does Xi’s one-man rule affect China’s policy towards the United States? Many in the West may find it tempting to liken Xi to Mao, but these two leaders differ drastically in their goals: while Mao merely used his position to disastrously strive for a far-fetched socialist utopia in China, Xi intends to gradually erode the influence of the United States in order to create a multipolar order in which China can safely thrive.

The Rise of Xi

The first was Xi’s prodigious anti-graft campaign, initiated immediately after he assumed leadership of the Communist Party of China (CCP). Xi attained leadership in the fallout of one of China’s most notorious political scandals: the Wang Lijun incident in 2012. Bo Xilai, a prominent Party official and then competitor of Xi’s, had been involved in the scandal, putting an abrupt end to his career and leaving him facing major corruption charges. The incident was disastrous for the CCP, revealing corruption and disunity at the highest levels of the Party. The CCP’s desire for order and unity opened the door for Xi to initiate the largest anti-corruption campaign in communist China’s history, toppling high-profile officials and political rivals in the process.

Second, in 2017, at the 19th Party Congress, Xi had his guiding ideology, often abbreviated “Xi Jinping Thought” by foreign media, inserted into the CCP’s constitution, and later the formal constitution of the People’s Republic of China. This made Xi the second leader since Mao to have his name added to the Party constitution while in office, signaling a striking consolidation of power.

Third, in 2018, Xi had the National People’s Congress vote to abolish presidential term limits, allowing him to effectively hold his position indefinitely and thereby making him ruler for life. There is speculation that in the future Xi may officially adopt another title, such as the now defunct “Chairman,” or perhaps a new title, like “the People’s Leader,” further enhancing his authority.

As for this year, Xi’s advance towards political supremacy has continued unabated, despite the coronavirus pandemic. Echoing the initiative which cemented Mao’s leadership, Xi has launched his own campaign to ensure the CCP’s fealty towards himself personally. The campaign, explicitly seeking to emulate Mao’s Yan’an Rectification Movement, targets the lower echelons of China’s politics and legal affairs bureaucracy. The effort involves officials studying Xi Jinping Thought, demands the elimination of “black sheep” from the Party, and indicates Xi’s desire to strengthen his control over the entire security apparatus, especially local law enforcement agencies. A successful move to bring the lower-ranking cadres in line would solidify Xi’s authority over the party to an immense degree.

Additionally, in recent weeks, the CCP Politburo passed new Central Committee Regulations, which govern how the Party makes decisions. The new regulations allow Xi to sidestep certain formalities when convening high-level meetings, further concentrating his authority. Moreover, the legislation raises Xi’s standing higher above the other six members of the Politburo Standing Committee, the Party’s most elite body. According to China’s official government website, the regulations “take the lead in safeguarding the status of General Secretary Xi Jinping as the core of the CPC Central Committee and of the Party as a whole.” The naming of Xi as the core of the Communist Party signals increased centralization of power.

The CCP’s recent high-level Fifth Plenum meeting in Beijing emphasized the “[promotion] … of a new model of international relations.” Xi has often tied this phrase to notions of “mutual respect” and “non-confrontation.” The phrase, though seemingly warm, is a front for Xi’s vision of the future of international relations: one in which China can continue to grow, unimpeded by the United States.

With more power in his hands, Xi is increasingly poised to realize his vision of a “new model of international relations.” Through the Belt and Road Initiative, Xi has expanded China’s influence from East and Southeast Asia to regions such as sub-Saharan Africa and Eastern Europe. The project is so important in Xi’s view that it was added to the CCP’s constitution in 2017. Xi has also sought to promote China’s image as a global leader by invigorating the Party’s international propaganda arm, securing ample resources for its mission. Xi’s influence has also enabled him to push for a diminishment of China’s economic dependence on the United States, as seen in the promotion of his “dual circulation theory” at the recent Fifth Plenum meeting.

So is Xi Jinping a new Mao Zedong? While it is hard to compare a rugged twentieth-century revolutionary with a twenty-first-century modern authoritarian, it is clear that Xi is closer than ever to achieving ultimate dominion over the party. He has gradually siphoned power from the CCP’s vast bureaucracy into his own hands, granting him near unchallenged control over the world’s most populous nation and second largest economy. But unlike Mao, who ruled a revolutionary party charged with imposing socialism on Chinese society, Xi Jinping now commands a ruling party, promoting its interests at home and, more recently, abroad. Decision-makers in Washington must realize that Xi is not coming after America directly, nor is such his intention; instead, he is pruning Washington’s influence overseas. Xi’s foreign policy is China’s foreign policy, and that policy seeks to weaken America’s global preeminence in order to create a more favorable environment for China.