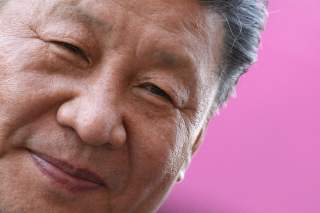 America is in danger of “a McCarthyite Red Scare.” China could be the latest target of unfounded fear.

So said Susan Shirk, a Clinton-era deputy assistant secretary of state and now chair of the 21st Century China Center at the University of California San Diego. The prominent academic issued her attention-grabbing warning in Beijing on Saturday, at the Yenching Global Symposium at prestigious Peking University.

At the same time, and more importantly, she maintained that America was overreacting to challenges posed by Beijing.

Shirk raises important issues, but ethnic Chinese and China-friendly figures in the United States are not now in imminent danger. And if there is any policy misjudgments at this time, it is Washington underreacting—not overreacting—to Beijing’s threats.

Chinese in America, whether citizens, permanent residents, or temporary visa holders, are always at a general risk of prejudice, discrimination, abuse, and physical injury. After all, Richard Hofstadter, the great historian, titled his 1964 Harper’s essay “The Paranoid Style in American Politics.” Yet at least at this moment, Chinese people look safe from paranoid Americans. The United States is at peace with the People’s Republic of China.

Shirk’s McCarthyism language seems out of place, but it comes at the same time that Beijing has been pushing its own charges of McCarthyism. The Communist Party-controlled Global Times in the middle of January came out with a “McCarthyism” editorial. Within hours of the tabloid’s blast, the Chinese Foreign Ministry publicly warned of “hysteria” in the United States.

Chinese officials are building a narrative of American persecution, presumably to defend themselves. Shirk, speaking from their capital on a prominent platform, is helping them do so at a time where there is, in the United States, an absence of persecution of ethnic Chinese or China-friendly figures. Accusing one’s opponents of McCarthyism where there is no whiff of it can be, well, McCarthyism.

The overhyped charge of McCarthyism, however, is not the primary shortcoming of her Peking University address. The primary shortcoming is her lack of appreciation of Beijing’s threat. “Right now,” Shirk said, “there is a herding instinct in the United States that is taking us off the cliff with various forms of overreaction to China as a security threat, an intelligence threat, a spy threat, a technological threat, an influence threat.”

“Off the cliff”? China poses those threats and others to America at the moment.

At the moment, Beijing has positioned about 275 vessels around Thitu Island, which is under control of the Philippines. This “cabbage” tactic was employed to seize Scarborough Shoal from the Philippines in early 2012 and has since been used in various other Philippine locations in the South China Sea. The United States has a treaty obligation to defend the Philippines. Beijing is also trying to dismember Japan, another treaty ally, and absorb traditional friend Taiwan. The attempts to grab territory from American allies and friends are part of a broad Chinese campaign threatening peace in the region.

The Chinese are interfering with American vessels and aircraft in the global commons, putting crews in danger. China has blinded American military pilots in faraway Djibouti and injured American diplomats in Guangzhou. Senior Chinese officers openly urge unprovoked attacks on the U.S. Navy and talk about killing Americans by the thousands.

Beijing is attacking both the concept of democracy and American democracy. Its agents operate on U.S. soil in violation of America’s sovereignty. It is making preparations to improperly interfere in the 2020 election, Russia-style. China may have actually done so last year as well. In any event, it brazenly tried to influence electoral outcomes last year.

Beijing is giving safe haven to North Koreans who have cyberattacked the United States. The assault on Sony Pictures Entertainment in November 2014 originated from Chinese IP addresses. Many, if not most, of the North’s hackers live in China, most notably the city of Shenyang.

China has imprisoned American legal residents—and possibly U.S. citizens—in concentration camps located in what Beijing calls its Xinjiang Uygur Autonomous Region and what traditional inhabitants of the area, the Uighurs, say is East Turkestan. The maintenance of these camps, whose purpose is to eradicate religion and ethnicity, constitutes a crime against humanity.

China for decades has been the world’s master proliferator of nuclear weapons technology. In defiance of American and global norms, it armed Pakistan and through Pakistan sent nuclear tech to the Middle East and North Africa. China has delivered components, equipment, and materials to North Korea for its nuke effort. Moreover, the North’s most sophisticated ballistic missiles—the solid-fuel ones—appear to be based on Chinese design. China supplied mobile launchers.

And ruler Xi Jinping has been dropping hints that China is the world’s only sovereign state, thereby implying that Americans are subjects, not to mention calling into question the legitimacy of the Westphalian international system.

Shirk’s proposed response is far less robust. She thinks the United States can still work to build warm relations with Beijing. Her primary concern is that America’s overreaction to China’s overreaching is “self-defeating,” as she said at the University of Pennsylvania’s Center for the Study of Contemporary China in January.

“I do believe that by overreacting to the perceived China threat, America may be harming itself, especially harming the openness and vibrancy of our own economy and our own society, which are the fundamental source of America’s strength as a nation and its competitiveness,” she said at the center.

Shirk has a point, but she misses larger issues. Take her reference to “openness and vibrancy.” It is precisely those attributes that have facilitated China’s annual theft of hundreds of billions of dollars of intellectual property. Defensive measures, which by now are necessary, will inevitably cost America. There is no way around it: Americans will have to suffer pain in the near term to avoid long-term decline.

China is attacking America, and, despite what Shirk says, the response so far has not been adequate.