Xi Sells 'One China' Dreams to the Wrong Country 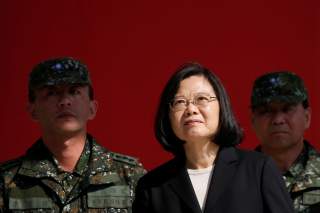 In a Washington Post op-ed stunning for its intellectual dishonesty, selective presentation of facts, and interpretation of the facts presented, Bucknell professor Zhiqun Zhu paints a picture of China-Taiwan relations dangerously divorced from reality. Writing in the wake of Chinese President Xi Jinping’s speech earlier this month to mark the fortieth anniversary of the 1979 “Message to Compatriots in Taiwan,” Zhu bafflingly concludes that Taiwan’s reaction to the speech, rather than the speech itself, foreshadows “a stormy relationship” in the coming years. His analysis betrays an ignorance of developments of cross-Strait relations in recent years and of politics on the island.

Zhu begins with a questionable assertion: from 2008 to 2016, when the more China-friendly Ma Ying-jeou was Taiwan’s president, cross-Strait relations were “stable and friendly, and cross-strait exchanges were dynamic.” This may appear true on its face. The two sides concluded numerous pacts during the Ma years, perhaps most notable among them an agreement to allow direct China-Taiwan commercial flights and the Economic Cooperation Framework Agreement. (Zhu overlooks the fact that progress on cross-Strait ties actually began during the independence-minded Chen Shui-bian administration; the first direct cross-Strait flights, permitted during the lunar new year holiday, occurred on his watch).

Of course, Beijing was never coy about its logic in pursuing these arrangements—closer economic integration, so the theory went, inevitably would lead to unification. That is an outcome that few on the island favor, though you wouldn’t know that from reading Zhu’s piece.

What’s more, China in fact maintained a high degree of pressure on the island during the Ma years. Beijing, for example, continued to limit Taiwan’s international engagement. Beijing did drop objections to Taiwan’s invitation as an observer to the annual World Health Assembly, but it also pressured the World Health Organization in 2011 to begin referring to Taiwan as a province of China rather than the more ambiguous “Chinese Taipei.” That year, China coerced South Korea into ending its forty-year military officer exchange program with Taiwan.

China likewise maintained a high degree of pressure on the United States to dissuade it from selling needed arms to Taiwan. Following the completion of a relatively minor arms sale in January 2010, Beijing cut off military-to-military exchanges with the United States for an entire year. The Obama administration would remain trigger-shy on arms sales for the duration of its term, denying Taiwan the weapons it most needed to ensure its self-defense.

Finally, in 2014, the Sunflower Movement, in which demonstrators called for greater public oversight of cross-Strait engagement, sprouted in response to Ma’s efforts to rapidly conclude a cross-Strait agreement on trade in services. Both Ma and Beijing, it turned out, ultimately misread domestic politics in Taiwan.

In short, during the Ma years, China sought to bind Taiwan more closely to itself while continuing to isolate it internationally and denying it the ability to defend itself. All the while, Beijing and the Ma administration were moving to advance cross-Strait ties at a pace with which many in Taiwan were uncomfortable. Stable and friendly? Hardly.

Zhu’s analysis only gets worse from there. He notes that “stable and friendly” ties “changed” with the 2016 election of Tsai Ing-wen, from the then-opposition Democratic Progressive Party, and that the relationship has been marked by “stalemate” ever since. Zhu intimates that both parties are responsible for this state of affairs, but he conveniently ignores the events of 2016–2018, an explication of which would undermine his broader argument.

Zhu might have noted, for example, that during her campaign and following the election, Tsai Ing-wen went to great lengths to keep cross-Strait ties on an even keel. Consider, for example, that during a June 2015 visit to Washington, candidate Tsai successfully convinced the risk-averse Obama administration that she would be a responsible steward of Taiwan-China relations. During the campaign, she consistently called for maintenance of the status quo and promised to abide by previously concluded agreements.

Beijing did not care. Following Tsai’s elections, China’s Taiwan Affairs Office (TAO) effectively announced it would refuse to work with the incoming DPP government. Even so, Tsai Ing-wen continued her efforts to reassure Beijing. In her inaugural address, she called for the “stable and peaceful development of the cross-Strait relationship,” with such development based upon “existing political realities and political foundations.” Per Tsai, those realities and foundations included the fact of 1992 talks between the two sides (more on that below) and the “existing Republic of China constitutional order.” The Republic of China (Taiwan) constitution defines national boundaries as in accordance with those of “one China.” The reference was a clear olive branch, yet the TAO described the speech as an “incomplete test answer.”

Beijing proceeded to launch a sustained pressure campaign on the island. It has suspended the more-or-less official cross-Strait communication mechanism, employed economic coercion, enhanced its military intimidation of Taiwan, and sought to further isolate it on the international stage. This campaign continues, and included potentially extensive interference in Taiwan’s recent nine-in-one elections (which are somewhat akin to American midterms).

Put simply, in Tsai and Xi, we have one president committed to maintaining the cross-Strait status quo and another intent on overturning it. If Beijing’s actions over the past three years have not made that clear, Xi’s recent speech did.

Zhiqun Zhu argues that Xi “introduced more flexibility to the ‘One Country, Two Systems’ model proposed for Taiwan,” which Xi has suggested should involve “the Taiwanese in developing a new model for Taiwan,” and that “the move injects a level of self-determination for Taiwan into the unification model.” Zhu, however, neglects to note that Xi’s formulation for “One Country, Two Systems,” was more restrictive than previous descriptions. Xi promised, “Taiwan compatriots will be fully respected in terms of their social system and lifestyle. Their private assets, religions and beliefs, and legitimate rights of the people in Taiwan will also be fully guaranteed.” But as Brookings Institution scholar Richard Bush has pointed out, “this is less than previous formulations, which included the Taiwan army and the island’s political institutions.”

Zhu, moreover, conveniently ignores the fact that Xi tacitly linked “One Country, Two Systems” with the “1992 consensus,” a reputed accord between quasi-governmental organizations in which both sides agreed that there is only one China while maintaining their own interpretations of what “one China” means. While the DPP has long rejected the 1992 consensus as the basis for cross-Strait relations, even prominent members of the nominally China-friendly KMT have now come out to reject Xi’s linkage.

Finally, Zhu lauds Xi’s proposal that “political parties and people from all walks of life” come together to negotiate “a roadmap for the peaceful development of cross-Strait relations.” According to Zhu, “this might be the most intriguing and innovative part of his speech since it essentially kicks off the unification process by sidestepping the unpopular governing party”—or, one might say, sidestepping the democratically elected government of Taiwan, whose unpopularity stems largely from domestic concerns, not cross-Strait policy.

The political reality is this: surveys show that there is miniscule support in Taiwan for unification and that the people there have developed a unique Taiwanese identity. Uncoerced unification is a Chinese pipe dream. It is Xi Jinping’s inflexibility, not Tsai Ing-wen’s, which may trigger a crisis.

Michael Mazza is a research fellow for Foreign & Defense Policy at the American Enterprise Institute where he focuses on U.S. defense policy in the Asia-Pacific region.