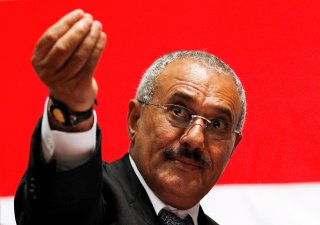 On November 29, 2017, Al Arabiya, a Saudi Arabia sponsored news outlet hailed a clash between Yemen’s former president Ali Abdallah Saleh, and a Zaidi Shia militia, the Houthis as an overdue but rightful uprising of the Yemeni people against the sectarian- and Iranian-backed Houthi militia. The Saudi government unequivocally stood by Saleh and his party, the General People’s Congress, whom it considered to be a dangerous threat just a few weeks ago. Overnight, Saleh and the Saudis found common ground and forged an unusual alliance to crush the Houthis.

But this enthusiasm has been undercut by the December 4 death of Saleh, who was killed by the Houthi militia as he fled the capital to his birth city, Sanhan, which is south of Sana’a. Then a shock and silence followed. Saleh’s death came as a surprise even to his killers. For Yemen’s millennials, Yemen without Saleh, the man who ruled the country for over thirty years, had never crossed their minds. Unlike Libyans and Iraqis, who took down the streets to celebrate the fall of their former presidents, Mouamar Al-Qaddafi and Saddam Hussein, not a single town in Yemen celebrated Saleh’s death. But the Houthis’ assassination of Saleh was the gravest mistake they will ever commit. Not only did it give the war in Yemen a purely sectarian face, but it has united the Houthis’ enemies. Saudi Arabia and its allies should take advantage of this mistake and unite Yemen’s northern tribes with the remaining anti-Houthi groups on the ground to recapture Sana’a.

Too Complex To Govern

Some of the history that has brought Yemen to this precarious moment should be helpful in understanding the current situation. When the Houthi militia invaded Sana’a in late 2014, they did so with the blessing of Saleh. Saleh had more than one hundred thousand of Yemen’s finest Republican Guard, plus a large store of Yemen’s military equipment under his command. Not only could he have defended Sana’a, but he also had the wherewithal to push the Houthis back into their stronghold of Sa’ada. But he had little interest in doing so. After all, he had bigger fish to fry. He was enmeshed in a tribal struggle with Hamid and Sadiq Al-Ahmar, two prominent leaders of the Hashid tribe to which Saleh belongs. Hamid and Sadiq had joined the 2011 revolution in Yemen and used a fully armed force to undo Saleh’s political influence. The Houthis, who then had a tribal animosity against the al-Ahmars, provided Saleh with an excellent reason to form an alliance with them to counter this eminent threat. He and the Houthis eventually expelled Sadiq and Hamid from Yemen. Even more significantly, the Houthi-Saleh alliance took complete control of Sana’a as well as a vast amount of territory in the rest of Yemen. These circumstances, however, posed an intolerable threat to Saudi Arabia, which began its bombing campaign against the Houthis and Saleh in March 2015.

For almost three years, the Houthis have been the de facto rulers of Yemen. They have not only alienated the northern tribes, but they have also committed serious humanitarian crimes against the Yemenis. They have bombarded cities like Taiz indiscriminately, imprisoned political rivals without probable cause, carried out extrajudicial executions, and shelled neighboring Saudi cities with ballistic missiles, thus causing shocking civilian casualties. In addition to their alienation of northern tribes, the Houthis’ political skills proved inept in a number of ways. They lacked the ability to provide the political patronage which Saleh had used to manage the region. The Houthis’ occupation increased corruption and a lack of administrative experience of their political appointees made an ailing economy even worse. The de facto government of the Houthis failed to pay the salaries of public employees and tribal leaders who, in Saleh’s era, received abundant kickbacks from the Yemeni government. Perhaps worst of all, the Houthis reduced the power and influence of the tribal leaders. In 2016 and early 2017, these leaders’ differences with the Houthis became aggressive, which brought on a Houthi crackdown that they justified by accusing the tribes of being collaborators.

I argued last September that Saudi Arabia had miscalculated its war in Yemen when it formed an alliance with Yemen’s internationally recognized president, Hadi. It should avoid making a similar mistake and take advantage of Saleh’s death to unite the opponents of the Houthis while repositioning its strategic vantage point. It should focus more on inflicting not only a military defeat on the Houthis, but also a psychological defeat. This can be done by uniting Ahmed Ali Abdallah Saleh with Ali Mohsin al-Ahmar, Yemen’s vice president whose relations with Saleh family were stained when the revolution occurred in January 2011. Also, Saudi Arabia should unite the exiled al-Ahmar children, Hamid and Sadiq, with Saleh, the son, and Ali Mohsin. This coalition will be able to glue together the remaining elements of the General People’s Congress with the northern tribes.

Saudi Arabia, in alliance with those groups, should shift its focus from Sana’a and launch an offensive in ‘Amran Governorate, northwest of Sana’a, which the Houthis took over three years ago. The Houthis have consolidated and concentrated their power in Sana’a rather than Amran for the past three years, and Amran would present an easier strategic point for the allies to recapture. This process will inflict a military defeat and psychological defeat on the Houthis. The second move will be to recapture Arhab on the outskirts of Sana’a, which is where the Houthis kept their heavy military equipment before moving it to Sana’a during their recent clashes with Saleh. The victories in Amran and Arhab will then be paving the way for a successful offensive in Sana’a. Finally, Saudi Arabia should arrange to unite the tribes in the oil-rich region of Ma’rib, northeast of Yemen with the remaining anti-Houthis forces. It should continue its rigorous supervision of Yemen’s maritime affairs and require any shipment to Yemen to be inspected in neighboring Djibouti to deter any Iranian attempt to slip ammunitions to the Houthis.

This strategy will exacerbate the situation in Sana’a, for now, due to the fact that the Houthis control vast areas there, and it will catalyze the end of Yemen’s crisis. Saudi Arabia will no longer collectively punish the Yemenis with a blockade, thereby using starvation as a war tactic, because it will become a partner with one of its previous enemies. Yemen will remain divided for a while, but the Houthis’ defeat will not happen unless Saudi Arabia redeploys its strategic power.

Mohamed Mahad D. Darar is an academic based in Colorado, USA. Mr. Darar has a graduate degree in International Relations and Conflict Resolution. His research focuses on the Middle East and East African region​. Follow him on Twitter.