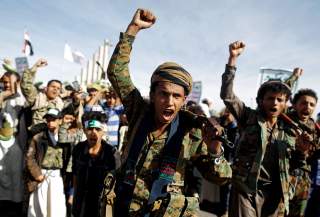 America’s allies are looking for peace in Yemen. The big question is: Will Iran seize this opportunity to end its war in the Arab world’s most desperate land?

Yemen, a country perched on the southern tip of Arabian Peninsula, has more internal refugees than any other nation on Earth. More than one-quarter of its population has been forced from their homes by a civil war that pits the Iran-backed Houthi tribal rebels against Saudi Arabia, the United Arab Emirates, and other Arab allies of the United States. Overcrowding, famine, polluted water and disease endanger as many as the war itself. The dead are stacked in large pits while new orphans cry without hope of succor.

So, it was a rare bit of good news that the United Arab Emirates withdrew some of its troops and called upon Iran to seek peace. “The Yemeni parties—the Houthis specifically—should see this move for what it is: a confidence-building measure to create new momentum to end the conflict,” Anwar Gargash, the UAE’s minister of state for foreign affairs, wrote in an op-ed for the Washington Post.

Perhaps the UAE is making a virtue out of a necessity. After four years of fighting, the UAE has failed to dislodge Iran’s proxies from the capital Sana’a. At the same time, Iran’s allies have received long-range rockets to strike neighboring Saudi Arabia’s airports and oil facilities.

The UAE is not pulling out of Yemen altogether, Gargash stated. “We will continue to advise and assist local Yemeni forces,” he wrote in his op-ed. “We will respond to attacks against the coalition and against neighboring states.”

Still, the opportunity for peace talks is real, and it should not be ignored by Iran.

It is unclear that Iran actually wants peace. The Islamic Republic is challenging the United States and allied Arab nations across the Middle East. Over the past four decades, it has managed to establish an “arc of influence” that stretches from Lebanon and Syria in the Levant, to Iraq and Bahrain on the Gulf, to Yemen on the Red Sea. And it has defended its fiefdom with proxy forces, who carry out terror attacks across the region.

Iran’s anti-American goals are clear from the public statements of its leaders. In fact, Iran’s Islamic Revolutionary Guard Corps Commander Qassem Soleimani recently said that “the Red Sea, which was secure, is no longer secure with the American presence.”

To be sure, Iran’s attacks on oil tankers, support for increased rocket attacks by Houthi rebels in Yemen, and its downing of a U.S. drone must be condemned and countered. But diplomatic demarches are not enough.

What the United States now needs is a comprehensive, integrated, and sustained pushback strategy.

The U.S. strategy of using “maximum pressure” is not enough to force Iran into new talks with America. The United States left the discussion table a year ago and in the following months Iran has shown no readiness to return to it. Since then, President Donald Trump has imposed the toughest sanctions against Iran since 1979. Still, Tehran refuses to budge, and its attacks have increased. Iran was the initial suspect after Saudi, Japanese and other tanker ships were damaged but there has been no proof of its involvement. When Yemeni Houthis fired missiles into Saudi Arabia’s Jazan province and at an airfield in Abha, Iran again claimed it had no control over its allies.

A new strategy is needed. Ideally, it should include certain elements:

The first real test of Iran’s intentions—peace or continued war—are in the sands of Yemen. If Iran grasps the olive branch in Yemen, then it is possible that future negotiation can put an end to its conflicts. If Iran instead sees the UAE’s bold move for peace as an opportunity to seize more land in Yemen, then the Arabs caught in the crossfire of Iran’s ambitions will experience years of misery.