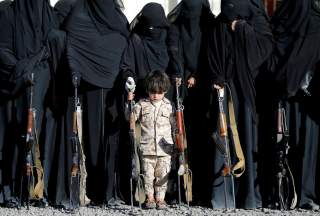 Despite apocalyptic predictions by some, the initial stages of the coalition operation led by Saudi Arabia and the United Arab Emirates to force out Iranian-backed Shiite Houthi rebels from Yemen have gone well. The campaign that they’ve waged over the past two weeks to take the Red Sea port city of Hodeida has shown that coalition forces will follow the same strategies deployed in their successful liberation of other Yemeni cities. The pressure has forced Houthi rebels to fall back and suggest a diplomatic solution. On its face, the Houthi proposal can appear enticing, but scratching below the surface reveals a plan that would perpetuate the crisis that has enveloped Yemen for more than three years.

The mounting pressure on the Houthis has unsurprisingly led to hints that rebel forces would be willing to cede control of the port to the United Nations, but only if they retain control of the city. If enacted, the vital flow of food and medicine would be maintained, possibly even increased. Iran would lose its reported ability to use the city to provide the Houthis with weapons technology, some of which is used to fire missiles against Saudi Arabia. Furthermore, the Houthis would also lose some of the revenue they gain from taxing ships entering the port.

But the goal of military operations must be to restore a system of stable governance to Yemen, and the Houthi proposal has several fundamental weaknesses which make it unworkable and unworthy of American or international support.

Adopting the Houthis proposal would force Hodeida’s citizens—who are not Houthis—to remain under Houthi occupation. Moreover, refugees who have fled this domination would have little reason to return to their homes.

The proposal would allow the Houthis to maintain an ability to choke off aid from within the city’s urban architecture. Approximately 70% of Yemen’s humanitarian aid and fuel supplies enters via the port. Given the Houthi’s repeated failures to live up to past agreements, it would be unwise to accept any assurances concerning such an important port.

But most importantly, such a compromise will not change the Houthis situation sufficiently to compel the group to support a political settlement. Besides, a compromise would weaken the hand of the legitimate Yemeni government at any negotiations.

So, what should be done?

First, the United States and the United Nations should continue to seek a diplomatic solution, but the endgame for Hodeida must remain the departure of Houthi forces from the city and its return to government control. The international community should continue to press the coalition to avoid operations which would lead to civilian casualties or any further stress on the fragile—and still insufficient—humanitarian infrastructure in the region. Beyond that, international options are few.

The UN is already heavily engaged in expediting humanitarian aid, and Russia will continue to block any Security Council pressure on Iran to cease supporting the Houthis. This is unfortunate as that support extends the conflict and suffering of Yemen's population.

In Washington, lawmakers would be well advised to listen carefully to Secretary of Defense Jim Mattis' wisdom regarding the need to continue limited U.S. aid to the coalition. An American withdrawal of support will delight Tehran and encourage its Houthi surrogates to reject political compromise. A withdrawal will also immediately reduce America's diplomatic ability to push for a political solution in a conflict. This is because regional allies are trying to restore stability to a failed state under threat by Iranian proxies with a documented history of caring little for Yemen's civilians.

American cooperation with the coalition should also continue against al-Qa'ida in the Arabian Peninsula (AQAP). In short, it is hard to see how a U.S. withdrawal will save Yemeni civilian lives but easy to understand how such a decision could lead to greater humanitarian suffering and an extension of Iran's destabilizing influence in a region of strategic importance to America.

The United States should certainly continue to press its Arab allies to seek a political settlement, but it should also provide support to expedite the delivery of humanitarian aid. This should include helping the coalition limit civilian losses while increasing the military pressure on rebels. Finally, America should enable the coalition to restore the city to the control of Yemen's internationally-recognized government. Also, given the Houthi indiscriminate use of mines, America should work to rally the international community to support demining operations before these weapons claim more Yemeni civilian lives.

The scale of the Yemen tragedy will rightly be a stain on this generation. But the United States should ensure that its actions meaningfully contribute to an end to this conflict and do not inadvertently extend the war or Iran’s malign influence. Doing so offers the best prospect of ending the suffering of Yemen’s people and ensuring the stability of the region and America’s interest requires.

Norman T. Roule served for 34-years in the Central Intelligence Agency, managing numerous programs relating to Iran and the Middle East. His service in the CIA’s Directorate of Operations included roles as Division Chief, Deputy Division Chief and Chief of Station. Mr. Roule currently serves as a Senior Adviser to the Counter Extremism Project and United Against Nuclear Iran.

Image: A boy stands with women loyal to the Houthi movement during a gathering held to show their support to the movement in Sanaa, Yemen January 14, 2018. REUTERS/Khaled Abdullah TPX IMAGES OF THE DAY