Yes, North Korea Will Give up Its Nukes and Kim Jong Un Is Crying to Prove It 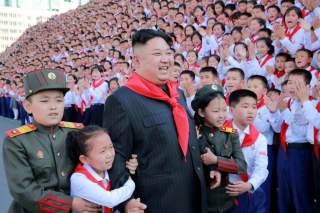 Tears trickle down the cheeks of North Korean leader Kim Jong-un as he gazes out toward the horizon while standing on a coastline. The scene is from a documentary for party officials that was released in April. A narrator explains that Kim is “distraught over his inability to radically overhaul the economy to make the reclusive country a vibrant power,” according to a report by The Asahi Shimbun, which got the information from a North Korean defector.

Kim’s show of weakness would shock North Koreans, who are told to worship the Kim family as gods. The defector believes that the documentary sends a message to party officials that they have no option but to follow Kim’s lead as North Korea prepares to stop nuclear testing and focus on economic development. The documentary may also be aimed at getting officials to accept the outcome of the Singapore summit talks between himself and President Donald Trump.

Kim’s tears are part of an ongoing attempt by his regime to sell denuclearization and peace to North Koreans. Kim will likely agree to abandon his nuclear weapons because they are currently threatening, and not ensuring, the survival of his regime.

Regime survivability comes first and foremost for the authoritarian communist regimes of North Korea and China. For instance, Deng Xiaoping abandoned Mao Zedong’s policies in order to transform China and maintain power. Deng saw the danger in Mao’s disastrous Cultural Revolution and collectivization policies and so led a partial liberalization of the Chinese economy to rescue the Chinese Communist Party’s legitimacy. Years later, Deng also ordered the merciless massacre of student protesters at Tiananmen Square because he felt that the party’s survival was at stake.

In North Korea, the Kim family maintained a cult of personality, carried out ruthless purges, and pursued nuclear weapons to stay in power. To consolidate his position, Kim executed his pro-Beijing uncle and ordered the successful assassination of his half-brother, who was under Chinese protection. He also doubled down on North Korea’s nuclear program after taking control in 2013. Kim did this by launching several intercontinental ballistic missiles and holding six nuclear tests. By the second half of 2017, North Korea had launched a missile capable of hitting “everywhere in the world basically,” according to Defense Secretary James Mattis. The regime also claimed to have successfully tested a hydrogen bomb that could be mounted on a missile.

However, Kim’s nuclear weapons quickly became a double-edged sword. The United Nations imposed the toughest ever sanctions on North Korea in September 2017, while Trump announced a “maximum pressure” campaign involving both economic and military measures. Since Trump met with Xi Jinping at Mar-a-Lago in April 2017, the United States has prepared for the worst. America has kept three aircraft carrier groups operating in the Pacific Ocean; practiced evacuation drills in South Korea, and had airborne troops simulate a foreign invasion. Furthermore, the United States also had reserve troops practice setting up mobilization centers for overseas deployment and involved advanced jet fighters in U.S.-South Korea military drills. Trump and his top administration officials have discussed military options for North Korea and maintained that all options are on the table. Meanwhile, China ordered mainland banks to cease doing business with North Korea, virtually shut down trade along the China-North Korean border. Moreover, China also cut energy imports and exports to North Korea beyond the requirements of U.S. sanctions. As a result of all this, experts now estimate that North Korea could run out of hard currency by late 2018 or 2019 as it relies on its foreign reserves to subsidize its deficit with China. Therefore, far from guaranteeing regime survival, North Korea’s nuclear weapons are fast exhausting the country’s finances and bringing it closer to regime-ending war with America.

Unlike his grandfather, Kim cannot expect help from China in North Korea’s latest confrontation with America. Relations between the People’s Republic of China (PRC) and the Democratic People’s Republic of Korea (DPRK) are not as close as “lips and teeth” as Mao described, but instead have wavered in the decades after the Korean War. After Xi Jinping took office in 2012, PRC-DPRK relations entered a state of deep freeze due to a life-and-death factional struggle in the Chinese government between Xi’s camp and the old Jiang Zemin faction. The Jiang faction was friendly to the Kim family and even supported North Korea’s nuclear program. However, during Xi’s first term, he never visited North Korea. He also refused to attend a Beijing performance starring Kim’s favorite North Korean girl band, instead inviting then South Korean president Park Geun-hye, but not Kim, to his grand military parade in 2015. In response, Kim tested ballistic missiles and nuclear devices during sensitive moments for Xi, such as firing three missiles in September 2016 when world leaders gathered in Hangzhou for the G-20 summit, and detonating a hydrogen bomb hours before Xi addressed leaders of BRICS countries at a summit in Xiamen in September 2017.

It remains to be seen if Xi is ready to mend fences with Kim. After all, Xi considerably weakened the number and clout of Kim’s Chinese supporters through purges as he fought the Jiang faction to consolidate his power. Additionally, recent meetings between Xi and Kim took place under the circumstances of U.S. “maximum pressure” and do not necessarily signify a complete thaw in PRC-DPRK relations. The meetings also do not suggest that Kim is ready to do Xi’s bidding. Around the period of Sino-U.S. trade talks in Washington, North Korea signaled that it was thinking about pulling out of the Singapore summit. The threat to withdraw from the summit could be Kim’s way of extorting concessions from Beijing. Many observers, however, believe that Xi had a hand in North Korea’s “about-face” since he held an unannounced meeting with Kim in the Chinese city of Dalian days before the Washington talks. But Xi has nothing to gain by sabotaging the trade talks with a North Korean gambit because Xi urgently needs to delay any trade war with America.

Indeed, the survival of the Chinese regime hinges on Xi Jinping’s ability to coax Kim to the denuclearization and peace table. The Chinese economy is currently in no shape to withstand a full-blown trade conflict with the U.S., and the Xi administration is still working to deleverage the Chinese financial sector. Meanwhile, Trump has indicated that Sino-U.S. trade is linked with progress on U.S.-North Korea talks. “When I think about trade in China, I’m also thinking about what they’re doing to help us with peace with North Korea,” he said at a press conference on May 22.

For instance, there is the example of the Chinese cell phone company and “national champion” ZTE. That company was paralyzed by a recent U.S. government seven-year business ban. Therefore, Xi has tried to gain a reprieve for that company and buy more time to fix the Chinese economy by cooperating more with Trump rather than with Kim. Otherwise, U.S. tariffs and the death of ZTE would cripple China’s economy and torpedo Xi’s political legitimacy, which it has tied to his ability to provide economic prosperity for the Chinese people.

Faced with an unwilling China and an uncompromising America, Kim may find that he has no choice but to agree to Trump’s demand for complete, verifiable, and irreversible denuclearization to preserve his rule. After all, Trump has promised to help North Korea achieve economic prosperity on par with South Korea and give security guarantees if Kim abandons his nukes. The catch is that for Kim, the biggest headache would come from selling the deal to North Koreans without losing prestige. Already, the propaganda gears are whirling. At a Worker’s Party meeting on April 20, Kim announced a shift away from a byungjin policy (pursuing economic and nuclear development simultaneously) in favor of pursuing economic growth. The documentary of him crying over his inability to reform North Korea’s economy also appears to be part of the propaganda ploy.

For the sake of maintaining its tough image, however, North Korea has not entirely dropped the use of confrontational rhetoric towards America. For example, North Korea’s criticism of White House National Security Advisor John Bolton and Vice President Mike Pence for suggesting a “Libyan model” of denuclearization is a case in point. But Trump’s response of scrapping the Singapore summit may have forced Kim to reconsider North Korea’s habitual aggressiveness. According to Daily NK, Kim reportedly criticized his senior officials for using “highly offensive comments” toward the U.S. after the summit was canceled, and ordered that “outdated diplomacy practices be replaced and for creative diplomacy to be practiced” going forward.

Old habits die hard, and North Korea can be expected to relapse into name-calling and show other signs of insincerity on the path towards denuclearization and peace. But Kim’s tears suggest that he has no better way forward if he wishes to secure his rule.

Larry Ong is a senior analyst with SinoInsider Consulting LLC, a consulting and research company based in New York City. He was part of a team that forecasted the key personnel reshuffle at the 19th Party Congress with over 80 percent accuracy and was the first to analyze the naming of Wang Qishan as Chinese vice president. Larry’s writings have appeared in The Diplomat and Real Clear Defense.