In Zaporizhzhia, It’s the World vs. the Atom 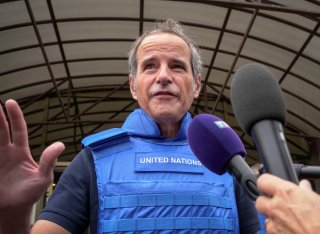 The arrival of an International Atomic Energy Agency (IAEA) inspection team to the Zaporizhzhia Nuclear Power Plant in Russian-occupied Ukraine has done little to alleviate fears about a radiological disaster. In fact, it is just the beginning of what will be a lengthy process to safeguard the site from catastrophe.

According to IAEA director Rafael Grossi, who visited the massive six-reactor complex on Thursday, September 1, as part of a fourteen-member fact-finding mission, the nuclear watchdog intends to maintain a presence at the plant despite it being an active warzone. “Let the world know that the IAEA is staying at Zaporizhzhya,” he said as heavy fighting and shelling in the plant’s vicinity continued.

“It is obvious that the plant and the physical integrity of the plant has been violated several times by chance, deliberately — we don’t have the elements to assess that,” Grossi said before describing how inspectors were working as the sounds of machine gun fire, artillery rounds, and mortars blanketed them. Nevertheless, Grossi noted that the site visit has already been fruitful: the team has been able “to put together a lot … of information.”

This is a positive step even though much work remains. In early August, Grossi warned of “very serious consequences” following fighting and several explosions near the plant’s electrical switchboard, which resulted in a power shutdown, one reactor unit losing its connection to the electrical grid, and firefighters rushing to the scene. These events forced the IAEA’s visit to Zaporizhzhia, which is intended to evaluate the plant’s operations on the basis of the agency’s Seven Pillars of nuclear safety and security, which have been routinely violated.

For instance, while the first and second pillars cover the physical integrity of the plant’s nuclear facilities and the functionality of its safety systems, the third details how human operators—who must be able “to fulfil their safety and security duties and have the capacity to make decisions free of undue pressure”—are critical to the plant’s viability.

This has become a point of intense international concern since last March when Russia began occupying Zaporizhzhia, Europe’s largest nuclear power station, and turned it into an army base. For more than five months, a skeleton crew of Ukrainian engineers has kept two of the plant’s six reactors operational at gunpoint while artillery shells punctured adjacent support buildings and wildfires threatened power lines which are critical to sustaining the plant’s safety functions. Working amidst a warzone and facing threats of arrest, it is unclear how long the engineers can safely operate the plant without it becoming hazardous—to themselves and the world. To be sure, any loss of electricity or additional personnel could imperil operations and spew radioactive contaminants across Ukraine and Eurasia—its victims at the mercy of wind conditions. Authorities in Ukraine have preemptively handed out iodine tablets to their citizens to reduce the risk of thyroid cancer, while Romania and Moldova have stockpiled tablets for their own citizens as well.

All this is occurring amid a tense geopolitical backdrop. For while the IAEA team and Ukrainian engineers labor to prevent nuclear calamity, Russia and Ukraine continue to castigate each other for violence at the plant and weaponizing its operations for their own gain. For instance, Ukraine has said that Russia is intending to connect Zaporizhzhia to its own electrical grid in order to supply Russian-occupied Crimea with power. In late August, Zaporizhzhia, which once provided half of Ukraine’s nuclear power and 20 percent of its electricity, was disconnected from the Ukrainian grid for the first time in its history, forcing Ukrainian engineers to activate backup diesel generators to prevent a radiological accident. Relying on backup generators is less than ideal in the best of circumstances, but even more so in an active warzone, where keeping them stocked with diesel requires both stable supply lines and the security necessary to prevent theft. Furthermore, if Russia can successfully integrate Zaporizhzhia with its captured territories, it would be a strategic victory for Moscow. Stymied in its war aims of conquering Ukraine outright, Russia has seemingly adopted a new strategy of annexing Ukraine piecemeal; expropriating Zaporizhzhia’s supply of cheap and reliable electricity furthers this objective and undermines Ukraine’s ability to deliver services and sustain a modern quality of life for its citizens.

Kyiv’s announcement that it has launched a counteroffensive near Kherson, to Zaporizhzhia’s west, indicates just how fluid the situation is. In fact, on September 1, Russia’s Defense Ministry claimed that it repelled an attempt by Ukrainian forces to seize the nuclear complex. It is unlikely to be the last assault on Zaporizhzhia. Although the United States has reportedly “urged” Ukraine to pursue limited political and territorial objectives in its campaign, U.S. officials have also assessed that Kyiv, bolstered by American weapons, has a “good chance” of success. Therefore, for now, the world will be forced to watch and wait while Ukraine and Russia jostle for supremacy in the south, hoping that calamity can be averted.