Zelenskyy’s Agonizing Choice to Save Ukraine 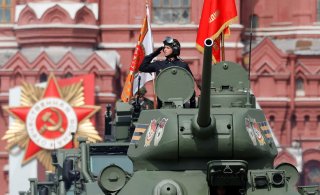 Following the beating the Russian forces took trying to conquer Ukraine, they are regrouping to attempt to occupy the eastern Donbas wedge of the country bordering Russia and the south-eastern piece bordering the Sea of Azov. Unless those maneuvers are only temporary and they attempt again to move farther west and to capture the entire country, that would leave Odessa and the southwestern part of Ukraine with access to the Black Sea still in Kiev’s hands.

After all the shelling and bombing, the decimation and carnage, the final humiliation is that Ukrainian president Volodymyr Zelenskyy will in all likelihood be required to assent to a Donbas agreement minimally satisfactory to Russian president Vladimir Putin.

Moreover, Putin may well have to ascribe if only tacitly to the fiction that the arrangement, limited to a significant slice of Ukrainian territory in the east and the south, fulfills the Kremlin’s objectives all along. “In general the main objectives of the first stage of the operation have been achieved,” said Defense Minister Sergei Shoigu on March 30, 2022. “The combat capacity of the Ukrainian armed forces has been significantly lowered, which allows us to focus our main attention and efforts on our principal goal—liberating Donbass.” An almost identical statement was preceded five days earlier by Colonel General Sergei Rudskoi, deputy chief of the Russian General Staff. Zelenskyy has recently hinted at holding Ukraine neutral as a part of an overall settlement but “we want an international mechanism of security guarantees where guarantor countries will act in a similar way to NATO’s Article No. 5,” said David Arakhamia, the majority leader in Ukraine’s Rada, and any such arrangement would be subject to a public referendum because the aspiration to join NATO is embedded in the constitution. Putin used his May 9 Victory Day speech to explain to Russians the “necessity” of his “special military operations” in Ukraine as the only way to prevent a planned attack on Russia by the “neo-Nazi regime” in Kyiv and its NATO allies. On the same day, Zelensky seemed to backtrack on his earlier hint at a possible accommodation. Dressed in army fatigues while walking alone down Kyiv’s deserted main traffic and commercial thoroughfare, Khreschatyk Street, he was now defiant: “We will not give anyone a single piece of our land.”

Much will depend on where Russia stops even if it limits its claims to the eastern part of Ukraine. Does that include the whole of the Luhansk and Donetsk oblasts, for example, or only the parts that were in contention with the separatists between 2014 and the February invasion?

The Donbas, once an industrial center, has been in decline, even ruin since the separatists with Moscow’s support took it along with Crimea in 2014. Its industries were uncompetitive globally even before 2014 and are now destroyed or barely operative. Most of its young and economically productive residents have migrated west to the Ukrainian heartland, if only “temporarily” as many originally hoped. The old, the immobile, and the sick who are left have little if any real source of income other than their pensions which have been difficult to collect from Kyiv and impossible to collect from Moscow. The separatist forces supported by Russia remain. As an objective matter, there is no longer much in those areas to covet let alone to fight over while risking the rest of the country. Yet no country is prepared except under duress to endure the amputation of a limb, however limp, especially by invasion and seizure. At stake is not objectivity but dignity, honor, and national identity. The full south from Crimea to Moldova is a different matter. Ceding it would remove Ukraine’s access to international waters through the Black Sea. It would render Ukraine land-locked absent the unlikely sufferance of Putin’s Russia.

But is the Donbas without the rest of the south worth the protraction of this horrible devastation, desolation, and death? Zelenskyy himself has recently hinted that the effective borders of 2014 and prior to February 2022 might be acceptable on the eastern side but with ironclad guarantees that any such arrangement, however repulsive, would be guaranteed—not an interim step toward more aggression. The full south from Crimea to Moldova in the west remaining in Ukrainian hands is a different matter. Ceding it would remove Ukraine’s access to international waters through the Black Sea. Ukraine would be landlocked.

But Putin has not been entirely clear about the southwest, including Odessa (historically Russia’s second-largest port after St. Petersburg). If anything, he has hinted at a move westward through the entire south toward Moldova after capturing the Donbas. Clearly, Ukraine would resist in the south, if only to retain access to the Black Sea.

In the longer term, any forced confiscation by Russia of the Donbas or any other part of Ukraine will merely cement the animosity of Ukrainians toward Russia resulting from Putin’s assault. The wreckage—geographic, physical, economic, psychological, and social—is only exacerbated by the Russian Army’s systemic personal atrocities (including rapes, shelling, and obliterating purely civilian targets, first torturing then executing ordinary men with their hands tied behind their backs) that raise obvious doubts about its discipline. Either the Army leadership has lost control or, worse, these war crimes may have been committed with its knowledge and perhaps under its orders. It wasn’t always so, in fact, quite the opposite. All Ukrainians speak Russian. Residents in the eastern part of the country use it as their first, and for some only, language. Language tensions simmered, occasionally boiling over, between the eastern, primarily Russian-speaking, and the western, primarily Ukrainian-speaking parts of the country. But not since 2014 and the Russian occupation of Crimea and eastern Donbas, after which Ukrainian nationalism swept the country. Even those Russian speakers who felt discriminated against after independence began to speak Ukrainian more frequently. Putin has now sealed that fate with his onslaught. If Ukrainians were Russia’s “little brothers” in his mind, they are completely estranged from the family now. Fratricide would be more likely. So, any territory ceded in negotiations under coercion now will linger for generations in the active minds, memories, and animosities of Ukrainians toward Russia (although perhaps not for the Russian people). They will hunger for the return of those territories and given any opportunity they will seize it back. Crimea and the Donbas could easily become the Alsace Lorraine of the twenty-first century.

Ultimately, to end the slaughter, the two sides will need to reach some kind of agreement, if only a tacit modus vivendi. Almost certainly that settlement will mean some de facto if not de jure control of Ukrainian territory by Russia or its proxies. Ukrainians cannot possibly forget. It will be a red blistering rash on the sides of the relationship and live in the active memory of Ukrainians for generations to come. But if it is inevitable, why not reach that arrangement sooner rather than later and avoid more devastation, carnage, and death? If Putin were willing to settle for Shoigu’s “principal goal,” wouldn’t Ukraine be well-advised to settle for that sacrifice, however agonizing? And notwithstanding Zelenskyy’s refusal to give up even “a single piece” of Ukraine? He would likely pay a substantial political price at the next election, but he will have saved more cities, towns, crops, industries, housing, schools, hospitals, emigration, and hundreds or thousands of lives and limbs. It will necessarily and appropriately be a Ukrainian decision but the NATO allies, including the United States, should encourage or at least not attempt to dissuade Zelensky from reaching it.

Gerald F. Hyman is a Senior Associate (non-resident) at the Center for Strategic & International Affairs. He has published articles in several opinion outlets, including Foreign Policy, the National Interest, the Hill, and the Diplomat. Between 2002 and 2007, he was Director of USAID’s Office of Democracy & Governance.