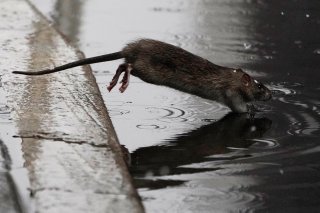 As thousands of restaurants across the country close down over the coronavirus pandemic and stop discarding their leftovers outside, rats are becoming so starving that they are resorting to all out battles and even cannibalism to survive, according to a rodentologist.

In New York City, where many eateries line the streets but are no longer in operation, rats are waging war, eating each other, and killing their young in order to fill their stomachs, according to an expert on the subject.

“It’s just like we’ve seen in the history of mankind, where people try to take over lands and they come in with militaries and armies and fight to the death, literally, for who’s going to conquer that land,” Bobby Corrigan, a rodentologist who specializes in urban vermin, said to NBC News.

“And that’s what happens with rats,” he continued. “A new ‘army’ of rats come in, and whichever army has the strongest rats is going to conquer that area.”

More than half a million Americans have tested positive for COVID-19. The crisis has led to over 20,000 deaths from coronavirus in the U.S.

In an effort to combat the crises, most of the country has been put under lockdown orders, shuttering businesses temporarily as the community tries to stop the spread of the virus. These stay-at-home orders have forced roughly 1-in-4 small businesses in the U.S. to close, the U.S. Chamber of Commerce reported.

Rodents living in urban areas are feeling the effects of shuttered restaurants.

“A restaurant all of a sudden closes now, which has happened by the thousands in not just New York City but coast to coast and around the world,” Corrigan added. “[T]hose rats that were living by that restaurant, some place nearby, and perhaps for decades having generations of rats that depended on that restaurant food, well, life is no longer working for them, and they only have a couple of choices.”

“They’re mammals just like you and I, and so when you’re really, really hungry, you’re not going to act the same — you’re going to act very bad, usually,” he said. “So these rats are fighting with one another, now the adults are killing the young in the nest and cannibalizing the pups.”