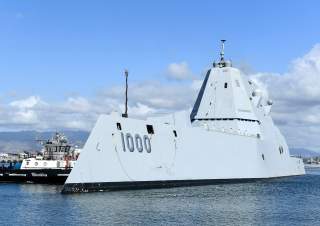 In short, battleships remained multimission vessels throughout their service lives—even after technological progress relegated them to secondary status. The Zumwalt is one-dimensional by contrast. Each ship is armed with two “advanced gun systems” capable of raining precision fire—albeit with lightweight projectiles compared to battleships’ 1,900- and 2,700-lb. rounds—on land targets some 83 nautical miles distant. Marines will welcome the backup.​