A World in Transformation THIS SPECIAL issue of The National Interest is particularly timely because we are living in a world that we know and that has shaped our thinking, but that world is in a process of transformation. We are struggling with institutions and practices of an Old World when that Old World is fading. This issue explores this global transformation, and I commend to you the articles contained here under the rubric of the “Crisis of the Old Order.”

I would like to share some of my own thoughts on this global transformation. When the Cold War ended during the presidency of George H. W. Bush, I was serving as the president’s national-security adviser. I thought at the time that the end of the Cold War marked the end of a period of history, one that began with the outbreak of World War I in 1914. The European system that had dominated the world for so long was washed away.

What followed that war was a period of instability and the rise of challenges to traditional societal organizations in the forms of fascism and communism. These ideologies took serious root in Germany, Italy and the Soviet Union. The United States soon realized it had to step up to the challenges posed by these threats to our concept of democracy. After World War II, America restored a balance of power in the early nuclear age, one that saved Western Europe from the Soviet threat and brought a measure of peace and stability to the world.

When that system crumbled with the end of the Soviet Union and its empire, we in the Bush administration may have realized the end of the Cold War marked the end of a period of history, but we did not completely visualize what the emerging new era would look like. We sought to help Europe fashion itself into a more congenial, unified system. When Saddam Hussein invaded Kuwait, we were determined to reverse that aggression, consciously seeking to do it in a way that would help establish new international rules dealing with conflict in this post–Cold War world. President Bush spoke of a “new world order.” And it was true that we in the administration knew the situation called for some kind of new global vision. But we were essentially feeling our way in the dark. We sought to empower the UN Security Council’s operations in the manner its founders had visualized and to organize an international coalition of forces to implement Security Council resolutions.

Then something truly fundamental became apparent, and it deeply affected the whole system. I refer to globalization, the inexorable convergence of markets, nation-states, peoples, technologies and forms of communication across national borders. It actually began during the Cold War but was slowed by that divided world. This is a significant force, working at base to undermine the old Westphalian state system that for so long dominated most of world thinking—particularly Western thinking. That venerable system was based on the concept of the sovereignty of the nation-state, territoriality and freedom of nation-states from internal interference by other nations. This concept—underpinned by industrialization, which greatly strengthened the power of the state itself—was embraced over centuries by nearly all nations, a notable exception being China. It spawned the nationalism that flowered particularly in the nineteenth and twentieth centuries.

Whereas industrialization strengthened the power of the state, globalization erodes national boundaries. More and more, things that need to be done in the world can only be done across national borders through cooperation between and among nations. The world is now operating under an uneasy mixture of the traditional Westphalian system and this new, globalized model intent on pushing things in a different direction.

Take as an example the financial crisis of 2008. The crisis demonstrated that we had a single worldwide financial system in which a crisis in one area could quickly spread throughout the world. But the world clearly had no single global way to deal with that crisis. This was far different even from the end of World War II, when a preeminent nation—the United States—could lead the free world in crafting a unified system for dealing with global economic problems. The result was the Bretton Woods agreement, establishing a system of monetary- and economic-policy management among nations so the industrial world could have rules governing commercial and financial relations. The postwar leaders set up the International Monetary Fund, the World Bank, and the General Agreement on Tariffs and Trade to develop rules of the road. The new G-20 is but a pale reflection of that once-brilliant institution building.

Those of us who studied world politics long ago in graduate school recall that nearly every textbook had a chapter entitled something like, “The Elements of National Power.” And we went through those elements one at a time. But power is different now. In fact, the very nature of power is being transformed. It is not based to the same extent on how many people are under arms or the strength of the national economy but instead on more subtle attributes and levers of influence. Partly as a result, it is increasingly doubtful there will be in the foreseeable future the kinds of great-power conflicts we have seen in our lifetimes.

In many respects, we live in a messier world. Consider the impact of communications on people and institutions. Throughout much of history, most of the world’s people believed they would live much like their parents and that their children would live much like they did. That was simply the inevitable order of the world. That has changed dramatically with the Internet, smartphones and social media. Politically active citizens worldwide now believe they can change things—and they do. An example is the Arab Spring.

And with globalized communications flowing rapidly around the world without checks or filters, readers may have difficulty verifying what they read. Bloggers have few restraints on what they can say or do. Discriminating between fact and opinion is more challenging.

How do we reconcile globalization and the Westphalian state system? Perhaps some refinements in the UN system—built for a world which was significantly different—could bring nation-states together in such a manner that they can cooperate in dealing with international problems such as global warming, health care, global commerce and more. But in the meantime, the world is in a state of drift, transition or even increasing chaos.

Since the end of World War II, the United States has been the country that could take the lead in moving the world from drift to transition and perhaps even to a new global order. The shining example is the immediate post–World War II period. But America is not as well positioned to do that now. The 9/11 attacks were a watershed experience for us. They were a wake-up call that jolted us from the relative calm of the 1990s, when the country basked in the notion that it did not have to think much about foreign policy. Afterward, it became clear that we had to think a great deal about foreign policy.

That led to an anomalous decade that has changed how we think about the world and altered our image in the world. Once, we were viewed as trying to do what was best for everybody; now, we are seen as being preoccupied with our own narrow interests. We have appeared sometimes to be seeking to dominate rather than to lead. As a result, it is not as easy as it used to be to get nations to mobilize in the same direction. And that retards our ability to navigate through this time of chaos and transition.

I still believe America remains the only country that can provide this kind of leadership. My hope is we will see the emergence of a gradual understanding that groups must work in concert, not competition, for the greater good. I suspect we will see a gradual erosion of attitudes committed to the total independence of the nation-state and its responsibilities. In addition, there is a growing acceptance of the need to work together in a world in which other forces are superseding the era of nationalism to some extent. Then perhaps a true new world order will emerge. But I am loath to put this into the form of a prognostication. I just hope it isn’t merely a case of wishful thinking.

Brent Scowcroft is the president and founder of the Scowcroft Group. He served as national-security adviser to presidents Gerald Ford and George H. W. Bush. He is a member of The National Interest’s Advisory Council.

Part of TNI's special issue on the Crisis of the Old Order. 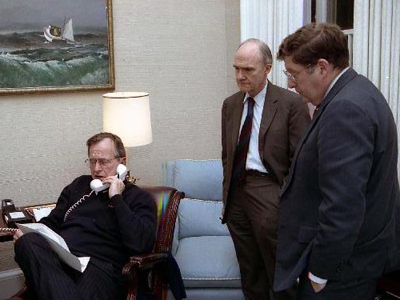 Pullquote: Once, we were viewed as trying to do what was best for everybody; now, we are seen as being preoccupied with our own narrow interests. We have appeared sometimes to be seeking to dominate rather than to lead.Essay Types: Essay