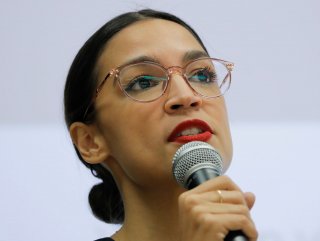 The formal nomination of Sanders—who suspended his campaign in April and endorsed former Vice President Joe Biden—was strictly a procedural move. But he was still able to receive delegate votes Tuesday night.

“In one of the shortest speeches of the DNC, Rep. Ocasio-Cortez did not endorse Joe Biden,” the official NBC News Twitter account tweeted.

NBC News later deleted the tweet and posted a screenshot of it, with an editor’s note attached, clarifying the misinformation.

Even though the outlet published an editor’s note, Ocasio-Cortez slammed NBC News for the “damage and misinformation” it had fed readers.

“You waited several hours to correct your obvious and blatantly misleading tweet. It sparked an enormous amount of hatred and vitriol, & now the misinfo you created is circulating on other networks,” she tweeted, in a retweet of the editor’s note. “All to generate hate-clicks from a pre-recorded, routine procedural motion.”

Ocasio-Cortez also questioned how the outlet would “fix the incredible amount of damage and misinformation that you are now responsible for?”

“Because a 1:15am tweet to slip under the radar after blowing up a totally false and divisive narrative across networks isn’t it,” she said.

In a series of tweets, Ocasio-Cortez noted the matter was “appalling” considering the convention committee had issued press releases with information about her role in Sanders’ presidential nomination.

“The DNC shared the procedural purpose of my remarks to media WELL in advance. @NBC knew what was going to happen & that it was routine,” she tweeted. “How does a headline that malicious & misleading happen w/ that prior knowledge?”

Convention rules call for a formal roll call of delegates, where each candidate who rallied enough support during the primaries and caucuses can receive delegate presidential nominations. But, the candidate can roll over delegates to the party’s presumptive nominee.

Back in April, when Sanders dropped out of the presidential race, he took his acquired delegates after coming to an agreement with the Biden campaign and a group affiliated with the senator. The agreement enabled Sanders to get state delegate and active convention committee slots, even without having an ongoing presidential campaign. On the second night of the convention, Biden finally received the required delegates needed to grapple the nomination.