AOC Nominates Bernie Sanders for President at DNC: What Did She Say? 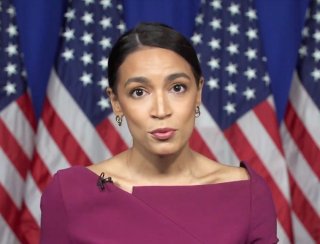 “In a time when millions of people in the United States are looking for deep systemic solutions to our crises of mass evictions, unemployment, and lack of health care, and espíritu del pueblo and out of a love for all people, I hereby second the nomination of Senator Bernard Sanders of Vermont for president of the United States of America,” Ocasio-Cortez said.

The formal nomination of Sanders—who suspended his presidential campaign more than four months ago—was strictly a procedural move. Convention rules call for a formal roll call of delegates, where each candidate who rallied enough support during the primaries and caucuses can receive delegate presidential nominations. But the candidate can roll over delegates to the party’s presumptive nominee.

“If you were confused, no worries! Convention rules require roll call & nominations for every candidate that passes the delegate threshold. I was asked to 2nd the nom for Sen. Sanders for roll call. I extend my deepest congratulations to @JoeBiden - let’s go win November,” she tweeted.

She also congratulated Biden via Twitter, noting, “I deeply look forward to fighting for our future together and reclaiming our democracy in November.”

Before Kasich took the virtual stage on the first of the convention, he slammed Ocasio-Cortez for receiving “outsized publicity” considering she’s “just some member” of the Democratic party. He added that her progressive views aren’t “representative” of the entire party.

The congresswoman took to Twitter to respond to his remarks, commending his decision to support Biden, but later lashed out at the former governor.

“Yet also, something tells me a Republican who fights against women’s rights doesn’t get to say who is or isn’t representative of the Dem party,” she tweeted.