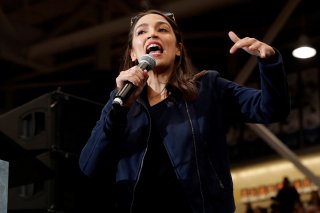 Rep. Alexandria Ocasio-Cortez (D-N.Y.) will not lead New York’s delegation to the Democratic National Convention, as she lost in a brutal defeat Tuesday against Gov. Andrew Cuomo.

Ocasio-Cortez’s nomination was unexpected and Democratic party chairman Jay Jacobs -- a friend of Cuomo -- noted that he was “blindsided” when the first-term congresswoman ran to head the delegation.

“It surprised me. I was blindsided by it. It was bad faith,” Jacobs said.

Cuomo received 218 votes, with Ocasio-Cortez only getting 34 votes.

“It was a bad performance. AOC got 13 percent of the vote. She did vote for herself,” Jacobs added.

Her nomination was initiated at a Democratic Committee meeting, but a spokeswoman for Ocasio-Cortez said that she wasn’t present at the virtual meeting. Instead, it’s believed that a staffer spoke on her behalf, as the spokeswoman noted Ocasio-Cortez had no intention in running.

“We didn’t want to lead the New York delegation at the DNC convention. We have no plans to go,” Laurent Hitt, an Ocasio-Cortez spokeswoman, said.

“Alexandria was surprised someone nominated her. We didn’t ask anyone to nominate her. We did not attempt to whip any votes. We had no premeditated thoughts about this whatsoever.”

Jacobs echoed these comments, noting that he believes there were “rogue operators” behind Ocasio-Cortez’s nomination.

Jacobs also added that he was discouraged by the results of the votes since the party wanted complete unity prior to the convention.

The convention is expected to take place from Aug. 17-20 in Milwaukee, Wis., and presumptive Democratic nominee Joe Biden will take the stage to formally accept the nomination as president. Despite the convention being less than two weeks away, Biden still hasn’t named his running mate -- an announcement that’s left the party in suspense for the last few months.

With Cuomo’s position in the state as governor, he has the inherited N.Y. duty to head the state and lead the delegation to the convention.

But, Cuomo and Ocasio-Cortez have collided in the past, as she rallied opposition and resistance against Amazon’s headquarters that was slated to be built in her district. Cuomo supported the notion, since the deal included subsidies.

Ocasio-Cortez has also urged the governor to support a progressive tax on billionaires that would help the working-class and those who’ve financially suffered due to coronavirus. Cuomo has avidly resisted the request.