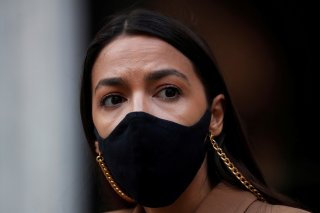 In a greenish-teal room with a massive air conditioning unit, Rep. Alexandria Ocasio-Cortez (D-N.Y.) tied her hair in a bun and slapped on mascara, as she prepared for her workday in a small New York apartment. She then left the brick building to catch the subway for her commute, flashing by barbed wire fences and towering brick buildings.

“Women like me aren’t supposed to run for office. I wasn’t born to a wealthy or powerful family. . . .  I was born in a place where your zip code determines your destiny,” Ocasio-Cortez said in an overlaid audio in one of her first campaign videos for her primary run in New York.

Just a few weeks later, Ocasio-Cortez upset former Rep. Joe Crowley in a seat he had held for almost two decades in a crucial win that initiated modern, passionate change for the base of the Democratic party. The progressive movement, which is led by Sen. Bernie Sanders (I-Vt.) and Ocasio-Cortez, has gained pivotal momentum over the last two years, as the New York congresswoman, as well as two other members of the progressive “Squad,” Reps. Ilhan Omar (D-Minn.) and Rashida Tlaib (D-Mich.), cruised to victory in their respective primary races.

Other progressives like Jamaal Bowman and Mondaire Jones in New York, Cori Bush in Missouri, Marie Newman in Illinois and Kara Eastman in Nebraska have garnered the party’s nomination in their districts, signaling an even larger, more powerful, far-Left movement, even though it isn’t represented on the Democratic presidential ticket, much to the chagrin of some progressives who were that 2020 would be their moment. Kamala Harris, a former prosecutor, is not their cup of tea.

Despite the lack of political representation on the Democratic White House bid, Ocasio-Cortez made the case for the future of progressives in her terse sixty-second speech at the Democratic National Convention just a few weeks ago. Progressives bustled after listening to speakers on the other side of the aisle talk longer than the congresswoman at the coronavirus-revised convention, a move that could welcome more independents and undecided Republicans to back the ticket, but repel far-left voters.

In her speech, Ocasio-Cortez promised a future that checked all the left-wing boxes: it would, in her words, provide healthcare, “repair the wounds of racial injustice, colonization, misogyny and homophobia” and reached to appeal to those who don’t feel represented within the party by Democratic nominee Joe Biden.

The congresswoman is a member of a new era of elected officials who are the youngest and most diverse that the country has ever seen. As a member of the Progressive Caucus—that represents some of the House’s most liberal officials and has a little less than one hundred members—there’s no question she has had a remarkable influence over the Democratic party as a freshman House member. Ocasio-Cortez launched her Green New Deal that 2020 presidential candidates supported, assisted in the resistance to move an Amazon workspace to Queens, ignited a national discussion about Medicare for All and called on New York Gov. Andrew Cuomo (D) to “tax the rich.”

Most of Ocasio-Cortez’s proposed legislation, however, hasn’t made much progress on the congressional floor. The Green New Deal talks have died of inanition. Then there is Medicare for All which hasn’t seriously been discussed besides during a few hearings, as other health bills are being heavily negotiated amid the coronavirus pandemic. Other freshman Democrats like Reps. Joseph Neguse (Colo.), Deb Haaland (N.M.) and Lauren Underwood (Ill.) have made greater legislative impacts and aren’t seen as far-left threats to the entirety of the Democratic base.

Nor is this all. Several progressive candidates have recently been crushed by more centrist Democrats, including one of the recent upset in the Massachusetts race where Alex Morse, mayor of Holyoke, Massachusetts, who received Ocasio-Cortez’s endorsement, lost to Rep. Richard Neal (D-Mass.).

On Super Tuesday, Jessica Cisneros in Texas lost to a Democratic incumbent, despite her high rank in Justice Democrats, a progressive group that chimed Sanders’ presidential campaign and continues to promote progressive ideals. Progressive losses suggest that even though the sentiment is robust, the rest of the country’s blue states are hostile to left-wing representation.

There is a Progressive Takeover, but Not over the Entire Party

Ocasio-Cortez’s campaign narrative tried to attract a diverse and ideologically unsatisfied voter, but the election results ironically proved otherwise as she beat the incumbent in wealthy and more educated areas of Queens, filled with white Americans. By contrast, Crowley dominated the working-class voter support, as well as Hispanics and African-Americans.

“Ocasio-Cortez, the young Latina who proudly identifies as a democratic socialist, hadn’t been all but vaulted into Congress by the party’s diversity, or a blue-collar base looking to even the playing field. She won because she had galvanized the college-educated gentrifiers who are displacing those people,” David Freedlander of Politico magazine observed after her victory.

Although Ocasio-Cortez may have revived some left-wing, New Deal era ideals, many Democrats fear a radically evolving movement that might not represent the sentiment of the whole party. Both Sanders and Ocasio-Cortez depend on energy and enthusiasm that’s only embraced by progressives. The Democratic party, in other words, isn’t being led by Ocasio-Cortez—at least for now—as much of the party fears a radical takeover.