Democrats Say Biden Has ‘Nothing to Fear’ When Debating Donald Trump 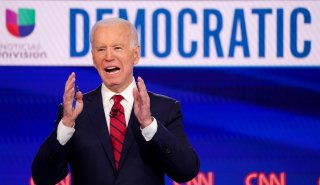 Democratic Senators urge the party’s presumptive nominee Joe Biden to go head-to-head with President Donald Trump on the debate stage, despite polarizing views that Biden should avoid the rounds of political football to maintain his national polling lead.

“We’ve had presidential debates for a long time now, and it’s been a way for a lot of people around the nation to be able to see the candidates in action,” Sen. Elizabeth Warren (D-Mass.), who is rumored to be on Biden’s vice presidential shortlist, said. “I know that Joe Biden will show who he is, a man of both empathy and competence, and I’d like the American people to have a chance to see that.”

Sen. Dianne Feinstein (D-Calif.) echoed Warren’s comments and said “Biden has nothing to be ashamed of, and I think he will shine. I think his candidacy is about an alternative to Trump, and Joe represents that alternative. So I think he presents it well.”

Debate researchers have speculated how much debates can actually have on a whole election. Some say debates tend to boost voter knowledge, confirm party positions and reveal how the candidate can operate under pressure when bolted with a political jab. Others believe debates don’t necessarily change a viewer’s vote.

Joe Lockhart, a Democratic strategist and former spokesman under the Clinton administration, warned “whatever you do, don’t debate Trump,” in a CNN op-ed piece, hinting that Biden should avoid the stage since Trump is a non-traditional debater.

Lockhart added that Trump doesn’t “follow the rules or the truth,” so it would be hard to even “enter the ring” with someone who has these strategies.

“Biden will undoubtedly take heat from Republicans and the media for skipping the debates. But it’s worth the risk as trying to debate someone incapable of telling the truth is an impossible contest to win,” Lockhart said.

Researchers and columnists have called for a fact-checking team on-site during the debates to monitor each candidate’s statements and raise a flag if one is incorrect.

“Joe Biden has nothing to fear from Donald Trump, even with all his lack of scruples and integrity,” Sen. Richard Blumenthal (D-Conn.) said. “If Donald Trump lies, he could be called out by the moderator.”

Despite Trump’s debate tactics, Biden has experienced jolts and lies during the Democratic primary debates earlier in the year. The Washington Post reported a number of misleading statements and truths that Biden’s early rivals said on the national stage to swipe listeners’ attention.

The Commission on Presidential Debates released the dates for the debates, with the first one scheduled at the end of September.

“We want more debates. We want debates starting sooner. First debate is scheduled for Sept. 29. By that time, sixteen states already will have voted. . . . That’s a concern to me. I want to see President Trump on the debate stage against Joe Biden,” Bill Stepien, Trump’s new campaign manager, said Monday on “Fox & Friends.”

There have been rumors that Trump didn’t want to debate at all due to loss of support in the polls, but the president’s staffers have insisted that Biden is the one that hasn’t formally committed to take the debate stage next month.

“Joe Biden is the only one who is being coy about showing up for debates, and he is the only one getting public advice from his supporters to dodge them,” Tim Murtaugh, a Trump campaign spokesperson, told The Hill.

But, Andrew Bates—one of Biden’s staffers—said the complete opposite, noting the presumptive Democratic nominee’s campaign staff is “still waiting” for Trump’s response.

“Perhaps the president is afraid to be held accountable for his unprecedented and continuing failures of leadership during the worst public health crisis in generations, which has infected over 4.5 million Americans, cost over 150,000 lives, and leveled the strong economy Donald Trump inherited from the Obama-Biden administration,” Bates added.