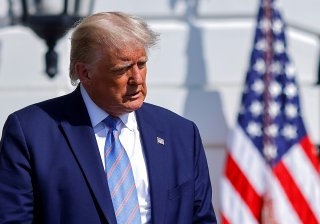 Does, or should, anyone care about the tax returns that Donald Trump has sedulously worked to conceal and that were revealed by the New York Times on Sunday evening? Trump himself initially dismissed the report as “fake news” but made little effort to contradict its specific claims. Nor did his lawyers.

The report lays out in sober detail the multifarious steps that Trump has taken over the past decades to pay little, if anything, in federal taxes. It also indicates that Trump has sought to funnel big dollars in the form of a consultancy, written off some $70,000 in expenses for his hairstyling, and invested in a lot of losing enterprises. He looks to owe several hundred million in loans that are coming due over the next few years. As charges of everything from corruption to treason are flying around, the Times report inadvertently offers a kind of how-to manual to avoid paying federal taxes.

But there is a defense, or to put it more precisely, defenses of Trump, sometimes contradictory, that are being aired. Herewith a brief guide to the arguments on behalf of Trump.

The most basic argument is the one being mounted by Freddy Gray, executive editor of the London Spectator. His response is simple—yawn. Trump’s tax shenanigans are no big deal. We’ve heard it all before. The report is no bombshell, but merely a damp squib.

As Gray puts it: “there is no smoking gun. Despite clearly exhaustive efforts, the Times investigative team has failed to uncover any illegality or clear wrongdoing. In fact, the subtext of the story is a mounting frustration at the skill of Trump’s accountants in alleviating their man’s fiscal burden. …the paper is reduced to mocking Trump where they think it hurts him most — by pointing out that he’s not as rich or as ‘smart’ as he says he is. Most of his business empire runs at a loss — ha ha! That line of attack gives satisfaction to media people who now hate Trump for a living. But do voters really care?” Enough might, which is why a more forthright defense of Trump is being mounted.

Enter the second response, which is to say that the media is, in fact, maligning Trump. He’s been a good citizen. The amount of taxes that he has paid is staggering. Don’t get hung up on the income tax, but consider the variety of other taxes that Trump has been paying. Besides, he employs thousands of Americans who have benefitted from his entrepreneurial savvy. Thus, Alan Garten, an attorney for the Trump organization, stated Sunday that Trump paid “tens of millions of dollars in personal taxes to the federal government,” which is true but doesn’t address the issue of income taxes. Don Jr. refined this line on Monday on “Fox and Friends,” arguing that “people don’t understand what goes into a business.” The real agenda of the Times, he said, was to supply former vice-president Joe Biden with “one or two catchy soundbites, and that’s the game.”

The third line of defense is one that’s now being advanced by President Trump himself. He says that he was fully “entitled” to all of the tax credits he claimed and that he has virtually no debt: “The Fake News Media, just like Election time 2016, is bringing up my Taxes & all sorts of other nonsense with illegally obtained information & only bad intent. I paid many millions of dollars in taxes but was entitled, like everyone else, to depreciation & tax credits.” He added that he “may release” his financial records, a promise he has made before but failed to fulfill.

With Trump potentially confronting financial ruin if he loses the presidency, he will fight harder than ever to prevent Biden from entering the White House. Trump literally cannot afford to lose. The stage is set for a brutally personal clash on Tuesday evening in Cleveland as Trump and Biden square off.