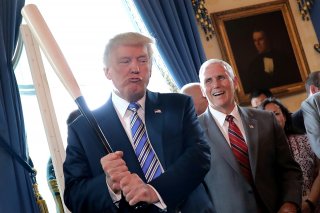 Since the outset of his presidency, President Donald Trump has been infuriated by the profusion of investigations of his administration. His ire has prompted him to refer to the press as the “enemy of the people” and the government bureaucracy as a “deep state.” Now that the Mueller investigation is long behind him and impeachment over Ukraine a distant memory, Trump has been seeking to turn the tables on his tormentors by arguing that they are the ones who should be suffering prison sentences for their misdeeds.

Is a turnabout coming—even, as some Democrats fear, an October surprise?

White House chief of staff Mark Meadows said Tuesday he has viewed “additional documents” that could cause “real trouble” for ex-officials involved in US Attorney John Durham’s examination into the origins of the Russia investigation. How Meadows obtained access to these confidential documents he did not say. But he did indicate that the believed they will cause real troubles for the proponents of Trump’s Russia investigation.

"Additional documents that I’ve been able to review say that a number of the players, the Peter Strzoks, the Andy McCabes, the James Comeys, and even others in the administration previously are in real trouble because of their willingness to participate in an unlawful act and I use the word unlawful at best, it broke all kinds of protocols and at worst people should go to jail as I mentioned previously," Meadows told Fox Business anchor Maria Bartiromo.

Meadows, a former congressional investigator, noted that he doesn’t have an exact timeline for Durham’s work in the criminal investigation that looks into former top FBI officials who examined potential election interference between President Donald Trump’s 2016 campaign and Russia.

The interview on Fox came after Strzok – the FBI agent who started it all and led the opening of the investigation into Trump’s campaign months before the 2016 general election – has insisted Trump was “compromised” by Russia in his new book “Compromised: Counterintelligence and the Threat of Donald J. Trump.” Far from backing down, Strzok has been declaring that he will be vindicated. On Tuesday, Strzok said on “CBS This Morning” that the notion that the FBI set a perjury trap for former Trump national security adviser Michael Flynn is wrong: “That’s a ludicrous accusation," Strzok replied. "The national security adviser of the United States had discussions with the Russian ambassador about lessening Russian response to ... sanctions well before the Trump administration was sworn in. We get one president at a time in this country and what Flynn did and what the FBI was trying to do to understand what he had done was absolutely legitimate, was absolutely justified.”

Strzok was fired from the FBI in 2018 after anti-Trump text messages swarmed the national spotlight, as the scandal questioned the integrity of his work.

“I have certainly done nothing wrong. If he finds the truth, I’m not worried,” Strzok told CBS This Morning Tuesday, adding that he has not been interviewed as part of Durham’s inquiry into the origins of the investigation.

“The president has encouraged not only declassification, but full transparency. He has nothing to hide," Meadows said. "I can tell you, it’s real easy for Peter Strzok to go on 60 Minutes when he doesn’t have to raise his right hand and tell the truth. In all of this interview, I can tell you this. It’s not backed up by the facts. It’s not backed up by documents that I’ve seen. And ultimately, his house of cards will come falling down."

Will it? October may be the month when the battle between the two sides is finally joined. For now, it remains an open question whether Trump or his adversaries will prevail in this high-stakes battle.