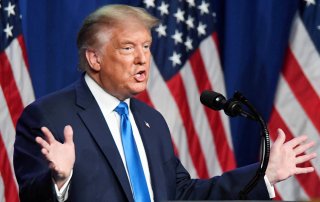 President Donald Trump has been drowning in a poll deficit against Democratic nominee Joe Biden in a number of states, including crucial, battleground Wisconsin—but a careful approach to taming protests and a strong appeal to the suburban voter could make the president win over the state’s support.

During the last two weeks, Biden has towered over Trump in Wisconsin polls, as he had a thirteen-point lead in a Pulse Opinion Research poll conducted before the former vice president announced Sen. Kamala Harris (D-Calif.) as his running mate. A Morning Consult poll—taken in the midst of the announcement—indicated a six-point lead for Biden.

Although some polls have revealed a significant advantage for Biden, other polls suggest the race for the presidential bid is tightening, as coronavirus concerns have subsided and Trump's approval rating jumped in six swing states in recent weeks.

A new CNBC-Change Research poll showed Biden with just a five-point lead—one of the lowest he’s gotten in the last two weeks. Another survey released Tuesday by the Trafalgar Group gave Trump a one-point lead over his rival.

After the 2016 presidential election, observers and voters grew skeptical of the accuracy of polling results. Democratic nominee at the time—Hillary Clinton—crushed Trump in the polls, leaving Americans to believe she’d be the first female president. Clinton held a 6.5-point lead over the president in Wisconsin, according to the RealClearPolitics average, but suffered a brutal defeat when Trump won the support of the state on election day.

Voters fear a repeat of the 2016 election, as polls from different outlets have colliding results.

Since Wisconsin’s vote is still up-in-the-air, Trump has a chance at winning the state’s support, despite what some polls might conclude.

To restore “law and order” amid days of violence and unrest in Wisconsin, Trump has called on the National Guard to help state and local law enforcement, specifically in Kenosha, Wis. The state’s governor, Tony Evers (D) originally rejected Trump’s offer of pumping federal law enforcement into the city, but after pressure from a GOP senator and uncontrollable protests, Evers agreed to the request.

At least three people were shot in a night of riots in Kenosha after the police shooting of Jacob Blake, a Black man, who was shot multiple times in the back, leaving him paralyzed. The state barely recovered after the killing of George Floyd in Minnesota, so Blake’s incident triggered another round of disruption and violence in the state tied to racial injustice and policing.

As a state that has been struggling to get-back-on-its-feet, Trump has the opportunity to lead the initiative to peacefully restore safety and order in Wisconsin. If federal law enforcement handles the riots successfully, then Trump could reinstate trust from the midwest in his ability to deal with a crisis and in his candidacy for president.

To gain the state’s support, Trump must encourage suburban voters—those that live in the outskirts of major cities and are fed up with the unrest—to back him come November. At the Republican National Convention, the Trump campaign is attempting to reach the suburban, or swing, voter, by tapping into their fears about violence in some of the country’s major cities and how, under his leadership, “law and order” will be re-established, so crime and overall fear can diminish.

President Richard Nixon initiated this type of strategy during the 1968 presidential election when Martin Luther King Jr. was assassinated, unleashing civil unrest in hundreds of cities. Suburban voters craved order and organization, and that’s exactly what Nixon focused on creating throughout his campaign.

As Wisconsin and other states in the midwest continue to experience disruption, Trump can draw in swing-state voters by assuring them “law and order” will finally be restored if he’s elected as president.