Nikki Haley for President in 2024? Her RNC Speech Could Be Step One. 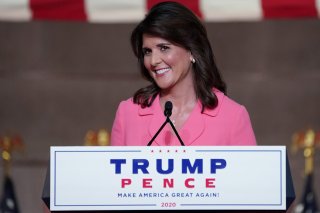 One of the rarest figures that took the Republican National Convention stage Monday night was former United Nations Ambassador Nikki Haley—a rising star in the party who has been praised for her loyalty to President Donald Trump, despite outwardly clashing with him in the past.

Ever since Haley served as the ambassador to the United Nations under the Trump administration for only two years, there’s been massive buzz that she’ll run for president in 2024. Although her convention speech slashed Democratic nominee Joe Biden as indebted to the progressive wing of the party and defended Trump for his handling of the economy and foreign policy plans, Haley’s underlying intention for the appearance could mark the beginning of her campaign for the presidency.

Haley, an Indian American who was the first female and minority governor of South Carolina, attempted to relate to a crowd of minority voters by talking about her heritage as a “brown girl in a black-and-white world” who had to deal with racial hatred during her younger years. As a minority in a predominantly White party, Haley can carry a fresh and diverse Republican perspective if she runs in 2024.

“It’s now fashionable to say that America is racist,” Haley said during her speech. “That is a lie. America is not a racist country. This is personal for me. I am the proud daughter of Indian immigrants. They came to America and settled in a small southern town. My father wore a turban. My mother wore a sari. We faced discrimination and hardship, but my parents never gave into grievance and hate.”

During the speech, Haley looped in remarks about the Black Lives Matter protests, a movement that a majority of Americans commend, according to polls.

“And of course, we value and respect every Black life,” she said. “The Black cops who’ve been shot in the line of duty, they matter. The Black small business owners who have watched their life’s work go up in flames. They matter. The Black kids who’ve been gunned down on the playground. Their lives matter, too. And their lives are being ruined and stolen by the violence on our streets.”

Haley also brought up one of the most tragic events that occurred in South Carolina in June 2015 during her time as governor when a mass shooting at a historic Black church in Charleston centered her under the national spotlight. She reached across the aisle to push for the removal of the Confederate flag from the South Carolina State House grounds and officially signed the legislation to move forward with the abolition.

“After that horrific tragedy, we didn’t turn against each other,” she said. “We came together, Black and White, Democrat and Republican. Together, we made the hard choices needed to heal—and removed a divisive symbol, peacefully and respectfully.”

Haley’s ability to compromise and work with the Democratic side will likely grant her an advantage if she decides to run in 2024 given that Trump has failed to welcome polarizing views to the Republican party.

The former ambassador’s message to cross party lines didn’t go unnoticed, especially because of her initiative to remove a Confederate flag from the ground—a movement that Trump has forcefully rejected as Democrats have called for the withdrawal of Confederate flags and monuments from public lands amid social unrest for the claims of systemic racism fizzled into the police system.

It’s not uncommon for Haley and Trump to tangle, as Haley pressed the president to release his tax returns before the 2016 South Carolina primary. In response to the pressure, Trump took to Twitter and said, “The people of South Carolina are embarrassed by Nikki Haley!” Haley later lashed back with, “Bless your heart.”

The two are also divided on some issues, particularly regarding abortion rights, as she is pro-life, while Trump generally has the same stance, except in the cases of rape and incest.

But, once Trump grappled the nomination, Haley remained loyal to the president, which compelled him to nominate her as the ambassador to the United Nations under his administration.

Despite Haley and Trump’s tendencies to collide on some political views, she overall defended the president for the work he’s done during his first presidential term. Her convention speech provided a crisp outlook for the future of the Republican party and bumped her to be a potential front-runner for the 2024 GOP presidential candidacy.