Which Republicans Will Run For President in 2024? (This Picture Is a Clue) 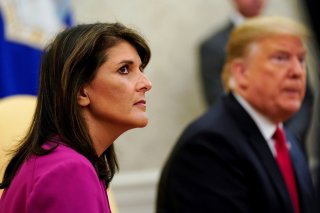 Republicans are waiting to see who wins the upcoming presidential elections and how the coronavirus crisis evolves before candidates toss their hats in the ring for the 2024 presidential nomination.

Will presumptive Democratic nominee Joe Biden wrestle the White House? Will the country see a coronavirus vaccine by January? Will schools reopen in the fall? Above all, does President Trump crash and burn or stage a Truman-style comeback?

“If [President] Donald Trump wins, we’ll continue to see a lot more of, maybe even more so of, what the Republican party feels they are now. If it happens to be former Vice President Biden winning the White House, then I think we’re going to see the Republican party, sort of, retract and look to see what they need to be moving forward,” Jason Mollica, professor at American University and part of the Fox News Radio launching team, said. “It will have to be a new Republican party … that combines the old form of reaching across the aisle and looking at the new realities of what is ahead.”

If Trump doesn’t win a new term, Mollica and other experts agreed that the party will have to come up with someone who not only embraces Trump’s modern political ideals like abortion revisions and reforming the North Atlantic Treaty Organization (NATO), but also represents the traditional Republican policies including free trade and gun rights.

Steven Teles, author and political science professor at Johns Hopkins University, said both parties “are becoming more durably factualized.” He continued to say that these “factions” within each party “compete and negotiate, and then ultimately cooperate with each other.”

“The [Republican] party nominee is likely to be someone who is at least moderately acceptable to both factions,” Teles said. “That’s the kind of negotiation that I think you’ll likely see going forward.”

GOP politicians considering running in 2024 must also examine the scope of the results.

“Trump is certainly now the underdog, but even if we assume that he’s going to lose, which is not a certainty, it matters how he loses,” David Karol, author and government and politics professor at the University of Maryland, said.

Some of the experts agreed that if Trump wins by a landslide, then a few of Trump’s political ideals will likely survive the party. If he wins or loses by a tight margin, then the candidate will have to do “damage control,” Mollica said, by re-establishing and adjusting leading ideals that will make the party more cohesive.

So, who’s in the early running for the GOP nomination for 2024?

Pence has an advantage right now. He’s Vice President during one of the most unpredictable health and economic crises in modern history. Pence has oversight of the coronavirus task force and, depending on how much success the current Administration receives after the virus subsides, the V.P. could have a strong chance of getting the nomination.

Pence and Trump, however, are divided on different political issues, but Pence tends to keep quiet. Pence has a history of supporting free trade and maintaining the Trans-Pacific Partnership (TPP), but Trump has made it clear that he is determined to focus on domestic trade and abandon TPP. The V.P., while representing some of Trump’s modern policies, can restore support from Republicans who don’t approve of Trump anymore.

Haley was the former governor of South Carolina and U.S. ambassador to the United Nations under the Trump Administration. She had a 63 percent approval rating while working as the ambassador in a Quinnipiac poll from 2018.

Haley and Trump are also divided on some issues, including abortion rights. She is pro-life and had once called members of the pro-choice movement “anti-feminist.” Trump is generally pro-life, but with some exceptions in the cases of rape and incest. Like Pence, Haley can bring in support of pro-life Republicans who don’t believe in the exceptions that Trump has advocated for.

Pompeo, acting secretary of state and former director of the Central Intelligence Agency (CIA), has confirmed he’s open to running for president last year, according to the Washington Examiner.

“America has given me an awful lot,” Pompeo said. “And if I thought I could do a good turn, there’s nothing I wouldn’t consider doing for America.”

Secretaries of state have become president in the past, starting with Thomas Jefferson. But, the most recent one is James Buchanan, the 15th president of the United States.

Governor Hogan is another candidate rumored to be looking into the 2024 presidential race. Hogan, serving on his second term, said the Republican party should mirror his previous reelection plans that ramped up support from deep-blue Maryland by nearly 12 points. He said the GOP leaders will have to “find that middle ground where people can stand together.”

“We’re going to have to find a way to appeal to more people and have a bigger tent,” Hogan said Sunday on NBC’s “Meet the Press.”

Hogan also mentioned that he gained traction from suburban women, independents and minority voters, all groups that Trump seems to be losing support from according to recent polls.

The president’s oldest son, Trump Jr., received 29 percent support to run for president, according to an Axios and Survey Monkey poll conducted in December.

Trump Jr. could rally Trump’s voter base, but might have a difficult time restoring the entire Republican party. He’s been an active and passionate social media user and has been loyal to his father’s campaign plans.

His book, “Triggered: How the Left Thrives on Hate and Wants to Silence Us,” is seen as a campaign biography, according to book reviews. He stresses the values of a Trump supporter and writes, “I am proudly one of you.”