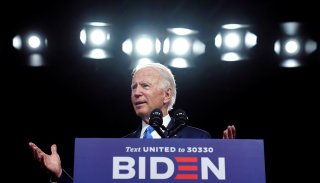 Democratic nominee Joe Biden’s lead over President Donald Trump in Pennsylvania has been shaved by nine points after a similar poll was taken in July that found the former vice president at a double-digit advantage.

A Monmouth University poll conducted after the Republican National Convention found Biden at 49 percent and Trump at 45 percent among all registered voters in the state — a statistical tie as the results are within the poll’s 4.9-point margin of error.

The same Pennsylvania survey published in July showed Biden with an overwhelming majority of support, as he led at 53 percent to 40 percent among registered voters. In recent days, polls—some from swing states—have indicated a ticking favor for Trump as the race tightens and the presidential bid comes closer.

“This is really a game of inches. The Trump campaign is looking to peel off a little bit of Biden support here and a little bit there. It may be working, despite the fact that Pennsylvania voters personally like the Democrat more, although this gap has narrowed,” Patrick Murray, a Monmouth pollster, said.

The results revealed that men in the state have shifted to support Trump, as he leads by nineteen points among men, compared to his two-point lead in July.

Biden, however, leads among voters under the age of fifty, as he currently holds a 9-point advantage, despite having a double-digit margin of twenty-nine points in the group in the July poll. Biden also leads by twenty-four points among women and eleven points among seniors.

“The Republican convention attempted to sow some seeds of doubt among core Democratic blocs, especially young and urban voters,” said Murray. “It looks like they may have had a small amount of success with that, at least for now.”

As a swing state that helped Trump win the 2016 election, Biden has made it a priority to campaign there. He initiated his 2020 White House bid with a rally last May in Philadelphia and recently traveled to Pittsburgh to deliver a speech where he condemned the violent protests, blaming Trump for creating the divide that’s flared it.

Pennsylvania, Michigan and Wisconsin are all traditionally blue states, but the Monmouth poll, along with others gathered by RealClearPolitics show an election that’s still up-in-the-air, as support for another Trump term is booming.

The Monmouth University poll of four hundred registered voters in Pennsylvania was conducted August 28–31 with a margin of error of 4.9 percentage points.