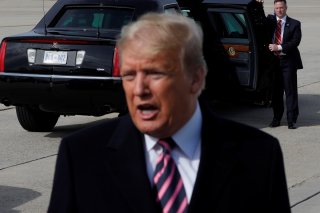 After Trump briefly circumnavigated Walter Reed hospital in a Suburban, criticisms of the president were widespread. Many of them were justified. But those criticizing the president also included Secret Service agents, a development that no one should welcome.

Here are some of the eyebrow-raising remarks that agents made. The Washington Post reported that an agent said, “He’s not even pretending to care now.” And CNN reported the gripes of a number of agents:

"That should never have happened," one current Secret Service agent who works on the presidential and first family detail said after Trump's drive-by, adding that those agents who went along for the ride would now be required to quarantine.

"I mean, I wouldn't want to be around them," the agent said, expressing a view that multiple people at the Secret Service also voiced in the wake of Sunday's appearance. "The frustration with how we're treated when it comes to decisions on this illness goes back before this though. We're not disposable."

There is more. Another agent complained, "You can’t say no." Another declared, "it was simply reckless."

It may have been reckless. But it is not the task of the Secret Service to weigh in on any action of a president. The logical next step is for the Secret Service to decide that it is inappropriate for a particular individual to be president. America, however, does not have a praetorian guard. It has an agency that is supposed to be dedicated to protecting the president’s life, no more no less.

The blunt fact is that the record of the Secret Service has been quite checkered in recent decades. Recall that in 2012 a scandal erupted when Secret Service agents were found being, well, serviced by prostituted in Columbia. 11 agents were placed on leave and had their security clearances suspended. It happened again in 2017 when an agent assigned to vice-president was busted meeting with a prostitute at a Maryland hotel. Other embarrassments have involved excessive drinking while on duty.

But the latest comments from serving agents offer even more cause for alarm. They signal an erosion in the single-minded mission to serve and safeguard the president. Previously, agents have criticized presidents after they resigned from the service. For example, in Crisis of Character: A White House Secret Service Officer Discloses His Firsthand Experience With Hillary, Bill, and How They Operate, former agent Gary J. Byrne painted a disparaging portrait of Bill and Hillary Clinton. He described the latter as "volcanic, impulsive, enabled by sycophants, and disdainful of the rules set for everyone else . . . a cheerless grifter always on her scheming way."

Attacking a president or his wife after resigning from duty is one thing. Doing it while serving is another. This breakdown in discipline will inevitably weaken the ethos of the Secret Service, prompting it to feel less and less inhibited in judging the performance of future presidents. Numerous institutions in Washington are breaking down. The Secret Service appears to be another one of them.