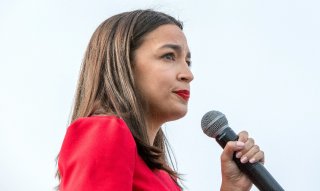 The US is less than four months away from knowing who will take over the current economic and health crises for the next four years.

If Joe Biden wins the presidency, many have argued that it’s likely that the 77-year-old former vice-president won’t run again, so researchers and media outlets have started speculating who will lead the next generation of Democrats.

The victory of the upcoming presidential elections will be a key factor in which politicians will run for president in 2024, with strategists predicting either a radical change or a moderate Democrat to take over the office.

So, who’s up next for the Democratic party?

Ocasio-Cortez - the youngest woman elected into Congress - is an outspoken Democratic socialist that’ll bring groundbreaking change to the party and to the country. She also endorsed Bernie Sanders during the 2020 presidential run.

As a progressive, she’s advocated for “Medicare-for-All,” tuition-free education, to implement a tax on the “rich” and the “Green New Deal,” a climate change proposal. Ocasio-Cortez has continued to reject corporate political action committee donations, a move that other progressive politicians haven’t done.

“The future of the Democratic Party is not Pete Buttigieg. It’s Alexandria Ocasio-Cortez,” Will Rodriguez-Kennedy, president of the California Young Democrats told POLITICO. “She has gripped the attention of fellow millennials across the country. The Green New Deal has changed the conversation on environmental action in the Democratic Party.”

The New York congresswoman also has heavy appeal to the working-class and to millennials, as she has more than 5.3 million Instagram followers and over 7.8 million Twitter followers.

The second-term New York governor has served as a leading figure and source of comfort for citizens during the coronavirus response as the state saw over 400,000 confirmed cases. Cuomo received bipartisan support in a NBC/Marist poll released in July, with 89 percent of Democrats and 28 percent of Republicans approving of his job as governor.

Despite him saying he “won’t think about” running for president when asked on CNN’s Cuomo Prime Time with Chris Cuomo, media outlets and Democratic strategists have speculated his candidacy.

In a SurveyMonkey poll published by Axios, Buttigieg leads the responses - with 30 percent support - for getting a Democratic vote in the 2024 presidential elections, ahead of Kamala Harris.

The military veteran ran for president in 2020 and rallied early support in the polls, with Biden trailing behind. His candidacy slowly took a tailspin, and the former mayor ended up endorsing Biden.

"You have the sense that this was not the end for Pete but the end of the beginning," David Axelrod, former chief strategist for President Barack Obama’s campaigns, told MSN.

He’s known to be a leader for the next generation of Democrats for being openly gay, and he’s generated much millennial support during his presidential run. Buttigieg is known for his political beliefs on increasing the federal minimum wage to $15 per hour, removing some student debt burdens and abolishing the Electoral College voting system.

Harris - a black and Indian American woman - is rumored to be Biden’s leading pick for his vice president. She was one of Biden’s early rivals for the Democratic presidential nomination and was a former district attorney and state attorney general.

If Biden wins in November and chooses Harris, she’ll likely be among the Democrats that run in 2024.

Harris is also at the top of the list, with Buttigieg in the SurveyMonkey poll, with 26 percent of voters saying they’d consider voting for her in the 2024 presidential elections.

The senator is known for her policies of raising the federal minimum wage to $15 per hour, reducing the cost of education, legalizing marijuana and boosting abortion rights.

Bennet - another former rival in the Democratic presidential run against Biden - is rumored to run again in years to come.

“You may see me once again,” Bennet told a crowd after abandoning the Democratic candidacy in February.

In the SurveyMonkey poll, 7 percent of voters said they’d consider voting for him in the 2024 elections. Although it doesn’t seem like much support, Democratic strategists see him running since he’s a “very solid senator.”

“He’s in a position now in which he can say, ‘I’m only going to take a job to work on things I’m interested in,’” Laura Chapin, a Democratic strategist, told The Denver Post. “He’s been a very good, very solid senator, but I also think Sen. Bennet has the luxury to do what he wants.”

Bennet - known to be more of a moderate within the party - advocates for increases in teacher pay, eliminating the Electoral College and disapproves of “Medicare-for-All.”