Vice President Susan Rice: Could This Be Joe Biden's Pick for VP Next Week? 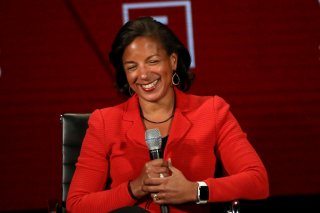 Presumptive Democratic nominee Joe Biden expects to select his running mate by the end of the first week of August -- a suspenseful announcement that’s made Democrats anxious to see the team set to tackle President Donald Trump in the upcoming election.

Nearing the top of Biden’s shortlist is Susan Rice, former ambassador to the United Nations and national security advisor under Barack Obama’s Administration.

“Whether I’m his running mate or I’m a door-knocker, I don’t mind,” Rice said on NBC’s “Meet the Press.” “And I’m going to do everything I can to help get Joe Biden elected and to help him succeed as president.”

Compared to Rice’s vice-presidential rivals, she doesn’t bring elected office experience or a remarkable group of voters -- but she does have significant experience in foreign policy and has a special relationship with Biden, as the two worked together in the West Wing during Obama’s second presidential term.

“My favorite unannounced visitor was Joe Biden, whose office was just down the hall,” Rice wrote in her book titled, “Tough Love.” “He came to check on how we were doing, buck us up, tell a joke, shoot the breeze, or deliver a Bidenism — a family aphorism that never lost its value.”

Colleagues who worked with Rice under Obama’s presidency say they’ve established respect for the VP candidate and that she’d be a strong running mate, as Biden understands her work ethic and ability to govern.

“He has seen her not just in good times but on really hard and challenging occasions,” Valerie Jarrett, who served as a senior adviser to Obama, told POLITICO.

“In the beginning, I thought ‘Who is this crazy person?’ But by the end, I just developed one of the most profound senses of respect I’ve had for anyone in government. She got things done. She’s one of the most effective bureaucratic operators I’ve ever seen in government,” a former National Security Council staffer told POLITICO.

Rice, 55, is also a woman of color -- criteria that’s been loosely set by Democrats following the killing of George Floyd and the series of violent protests scattered across the country surrounding issues of systemic racism and policing.

Despite her expertise in foreign affairs, her knowledge might be redundant considering Biden’s familiarity and experience in it. Some researchers and strategists have suggested that Biden should choose a running mate who brings diversity to the Democratic team to rally a group of supporters that the presumptive presidential candidate couldn’t have gathered by himself.

If selected as VP, Trump and GOP leaders would likely make remarks about Benghazi. In 2012 -- when Rice served as the ambassador to the United Nations -- four Americans were killed in a terrorist attack on a US mission in Libya. Following the attack, Rice went on national TV and claimed it was unexpected, and it was an act of spontaneity in response to a video. Later, it was revealed that her statement was incorrect.

“She went out and made up a story about a video and a protest when she knew full well that this was a terror attack,” Secretary of State Mike Pompeo told Fox News last month, referring to the Benghazi issue.

Biden’s former colleague also doesn’t have much name recognition like one of her top rivals does -- Sen. Kamala Harris (D-Calif.). Harris ran for the Democratic presidential candidacy for the upcoming election but had to drop out of the race due to a lack of funding. The California senator is also at top of Biden’s shortlist, as she has been elected in office and understands the pressures of being center-stage for political football.

Even though there are speculations about Rice, Harris, and other female candidates, in less than two weeks, the country will know who Biden has chosen to help defeat Trump and swipe support from major swing states for the upcoming election.