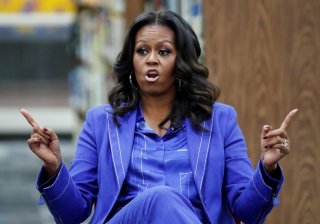 By mid-April, Joe Biden has already coalesced the Democratic Party around his nomination more successfully than his predecessor Hillary Clinton did in 2016. Biden holds the full support of the establishment, and he more easily won the support of progressives like Bernie Sanders by using more sugar than vinegar. There remains one high profile Democratic endorsement left, that while inevitable, makes it no less important.

First Lady Michelle Obama is consistently ranked as one of the most admired women in America, demonstrating bipartisan appeal. Her 2018 memoir sold over ten million copies in only four months. It is a universal consensus among pundits that she would win any office she would choose to run for. The rumors of her future presidential campaign were as numerous as they were unsubstantiated.

"We know what pretty much everyone in America does: Michelle Obama is probably the most beloved member of the Democratic party and her support is a big deal," an anonymous Biden aide told The Hill. "Any future announcement would reflect the incredible impact her voice has."

That announcement could come as soon as next week. Former President Barack Obama endorsed his running mate earlier this week in a composed, serious twelve-minute video. While her husband’s relationship with Biden was never as rosy as they bragged, Michelle is reported to have always had a soft spot for Joe. The question for the campaign is how to make the most of that.

Barack Obama previously pledged that once the Democratic nominee was decided, he would be all for the campaign trail in 2020 to defeat President Donald Trump. It is unlikely that Michelle, whose most well-received speech of public career told people that, “When they go low, we go high,” is suited for the same retail, bare-knuckle politics.

It is likelier that for the remainder of the 2020 campaign, Michelle Obama will assist Joe Biden with voter turnout and registration. In 2018 she joined a coterie of celebrities in creating the group “When We All Vote,” whose purpose is to encourage people to take advantage of the ballot box and become more involved in the political system. The group is non-partisan.

Speaking for this cause, Michelle Obama recently came out in favor of a vote by mail system. This idea is receiving intense scrutiny due to the uncertainty of the coronavirus pandemic, and the fear that the virus will make voting in person in November a health risk.

The idea, and Michelle’s promotion of it, is opposed by conservatives. “Former First Lady Michelle Obama is using this crisis to promote the radical expansion of nationwide voting by mail. Citizens could request ballots online and then print them at home,” said Fox host Tucker Carlson, who believes such a system would “destroy the public’s faith in election outcomes.”