Why Are Ben Sasse and other Republicans Trying to Cancel Donald Trump? 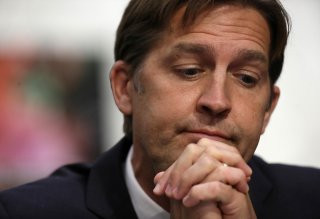 In a telethon town hall held with 17,000 Nebraskans, Sasse unloaded on Trump, accusing him of fawning over foreign dictators, amassing a huge federal deficit, and mistreating women, among other things. Sasse declared, “The debate is not going to be, ‘Ben Sasse, why were you so mean to Donald Trump? It's going to be, 'What the heck were any of us thinking, that selling a TV-obsessed, narcissistic individual to the American people was a good idea?'”

How convenient. Now that Trump appears headed for defeat, a politically woke Sasse isn’t simply turning on the man whose endorsement he courted in 2018 when running for reelection to the Senate. He’s trying to cancel Trump. There was never any reason for Sasse, who espouses a neocon foreign policy, to favor Trump in the first place. But he never seemed to take a stand against Trump over the past four years. So his current professions of shock and horror at Trump’s actions and behavior ring hollow. They are redolent less of moral backbone than sheer opportunism. In fact, Sasse, who is the author of a book called The Vanishing American Adult, may be Exhibit A of his own thesis.

As Sasse seeks to disencumber himself of Trump, Maryland Gov. Larry Hogan is pursuing a variant of the Sasse distancing game plan. His neat idea is to proclaim that he cast a write-in ballot for Ronald Reagan in 2020. The Gipper is widely viewed as one of the great presidents of the twentieth century, but invoking him is a sign that Hogan and his ilk really have nothing new to offer apart from stale and tired bromides. According to the Washington Post, Hogan explained: “I’m a lifelong conservative Republican. Reagan was the guy. I marched around as a college kid on the floor of the convention with a Reagan hat and a Reagan sign.” It’s touching that Hogan is willing to share his teenage memories of the Reagan era, but what bearing they have on restoring the faltering American economy is an open question.

Then there is Sen. Susan Collins who has also begun to voice tiny hints of dissent with Trump, including her opposition to his nomination of Amy Coney Barrett. Today, Trump tweeted: “There is a nasty rumor out there that @SenatorCollins of Maine will not be supporting our great United States Supreme Court Nominee. Well, she didn’t support Healthcare or my opening up 5000 square miles of Ocean to Maine, so why should this be any different. Not worth the work!”

If Trump does win reelection, he is sure to have a long memory about who did and did not support him during his time of trial.

If the polls are anything to go by, however, he really is headed for the exits. The incipient signs of revolt in the GOP suggest that a minor civil war will erupt inside the party should it endure a landslide defeat. It’s happened before in 1964 and 1974. Each time the GOP bounced back. But whether Sasse, Hogan and others are credible standard-bearers for the party in the future may be wondered.